Supreme Court Justice Neil Gorsuch noted new commissions in Michigan and other states as he questioned whether the court should rein in redistricting. 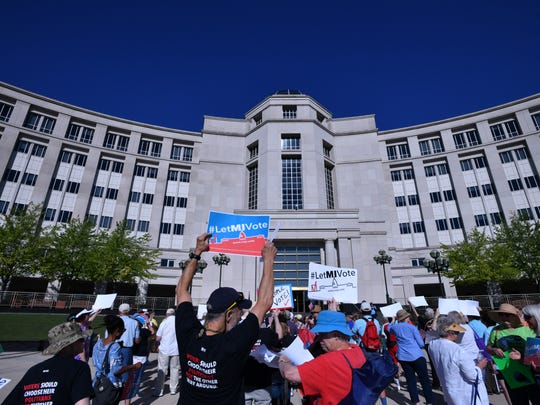 U.S. Supreme Court Justice Neil Gorsuch on Monday pointed to new commissions in Michigan and other states as he questioned whether the high court should intervene to rein in partisan redistricting efforts typically governed by local legislatures.

“One of the arguments that we’ve heard is that the court must act because nobody else can as a practical matter,” Gorsuch said in oral arguments over alleged gerrymanders in North Carolina and Maryland.

Michigan voters last fall approved a ballot measure to strip the state Legislature of its redistricting powers and hand the job over to a new citizen commission.

But “the vast majority of the states east of the Mississippi,” including North Carolina, do not allow for citizen initiatives, attorney Emmet Bondurant told Gorsuch as he argued for court intervention.

“The states in which you have independent redistricting commissions are states in which those commissions were adopted over the dead bodies of the legislators by citizen initiative, passed overwhelmingly by the citizens and in the face of legislative opposition,” Bondurant said.

The Supreme Court could decide the case by the end of June.

Separately, a federal three-judge panel is deliberating on a Michigan lawsuit that alleges GOP gerrymandering and seeks new district boundaries for 2020 — the last election cycle before the independent commission draws its first maps.

Kid Rock, a Clarkston resident also known as Bob Ritchie, posted a photo on social media Sunday of himself in American flag pants posing with Trump. The president was golfing this weekend at the Trump International Golf Club in West Palm Beach.

"Another great day on the links! Thank you to POTUS for having me and to EVERYONE at Trump International for being so wonderful. What a great man, so down to earth and so fun to be with!! KEEP AMERICA GREAT!!" Kid Rock posted on Instagram.

Another great day on the links! Thank you to POTUS for having me and to EVERYONE at Trump International for being so wonderful. What a great man, so down to earth and so fun to be with!! KEEP AMERICA GREAT!! -Kid Rock

Ritchie has visited the White House several times during Trump's presidency, including attending the signing of a bill in October overhauling the way music is licensed and songwriters compensated..

Ritchie, 48, briefly flirted with a U.S. Senate run in Michigan in 2017 but ultimately campaigned for GOP nominee John James of Farmington Hills.

The Federal Election Commission late last year dismissed a complaint about his "fake" Senate campaign in Michigan after Ritchie claimed it was merely a concert promotion.

Tlaib hits back at NRCC

The NRCC has run digital ads targeting Reps. Slotkin and Stevens, asking if they will stand up to "baseless" impeachment claims involving President Donald Trump, using a clip of Tlaib saying "we're going to impeach the mother (expletive)."

NRCC spokeswoman Carly Atchison referred to Tlaib as the "leader" of the Democratic Party.

"Leader of the party? News to me. Our party is made up of leaders like @HaleyLive & @ElissaSlotkin who fight for their districts and the issues that matter to their communities," Tlaib tweeted at Atchison.

"Stop trying to use my words & priorities to attack them - you’ve got nothing on them. Nice try."

Leader of the party? News to me. Our party is made up of leaders like @HaleyLive & @ElissaSlotkin who fight for their districts and the issues that matter to their communities. Stop trying to use my words & priorities to attack them - you’ve got nothing on them. Nice try. https://t.co/fXyJhkoWjG

Tlaib introduced on Wednesday her impeachment resolution calling on the Judiciary Committee to investigate Trump.

U.S. Rep. Debbie Dingell, D-Dearborn, was selected to co-chair the bipartisan Great Lakes Task Force, which advocates for preservation of the Great Lakes and issues that support the region.

“The Great Lakes are not only a natural resource but a way of life that support communities throughout the region,” Dingell said in a statement.

“Environmental threats such as Asian Carp, harmful algal blooms, PFAS, and climate change affect us all. Protecting the Great Lakes for future generations has never been a partisan issue."

The website RedistrictingMichigan.org supplies residents with a timeline of the selection process, frequently asked questions and a portal to register for an application when they’re made available in late 2019.

Benson will oversee the application and selection process for the 13-member Independent Citizens Redistricting Commission approved by voters in November. Benson’s office also will provide administrative support to the group so that it can adopt a redistricting plan by November 2021.

The system will replace the partisan process used during the past several cycles in which the party in power redrew Michigan’s legislative and Congressional boundaries every 10 years.

“For the commission to succeed, continued citizen involvement, engagement and education is critical,” Benson said in a statement.

While the page provides preliminary resources, Benson expects to build out the site with more detailed information on how to apply and a portal through which applicants can apply. Other application formats also will be available later this year.