Peters: Bulk up Customs and Border Protection staffing at ports of entry

A bill by Sen. Peters aims to plug a shortage Customs and Border Protection officers at a time when Southern-border crossings are breaking records.

Peters: Bulk up Customs and Border Protection staffing at ports of entry 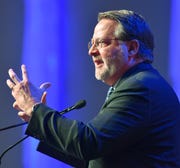 "As you move officers around, that creates shortages and eventually there’s movement to try to readjust around the country, and you’re likely to see folks taken away from Michigan," said Sen. Gary Peters of Bloomfield Township. (Photo: Todd McInturf, The Detroit News)

Washington — Two border-state senators, Gary Peters of Michigan and John Cornyn of Texas, want to plug a shortage of nearly 4,000 officers in the U.S. Customs and Border Protection agency as the number of migrant families crossing the southwest border is breaking records.

Their bipartisan bill requires CBP to hire no less than 600 additional officers a year until the agency’s staffing needs are met.

Peters, the ranking Democrat on the Senate Homeland Security and Governmental Affairs Committee, said he's been concerned about the understaffing for a while.

The measure is "even more critical," Peters said, after the Trump administration announced last week that as many as 2,000 Customs and Border Protection officers would be voluntarily reassigned to sectors across the southwest border to help with the influx of unauthorized arrivals from Central America.

"As you move officers around, that creates shortages and eventually there’s movement to try to readjust around the country, and you’re likely to see folks taken away from Michigan," said Peters of Bloomfield Township.

"Although I’m not aware of any announcement right now to do that, it’s safe to assume when you start moving 2,000 people to specific locations that creates gaps in other places, and those gaps are going to have to be filled. They’ll either be filled with new hirees or by people being transferred from places like Michigan."

"Our Customs and Border Protection officers have the important task of not only keeping us safe, but also ensuring that the legitimate trade and travel our economy relies on can continue to flow swiftly through our ports," said Cornyn, a Republican.

"This bill goes a long way to ensure CBP has the adequate resources, staffing and infrastructure they need to help keep our ports safe and running efficiently.” 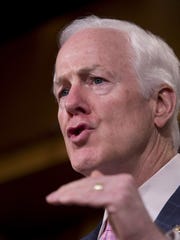 "Our Customs and Border Protection officers have the important task of not only keeping us safe, but also ensuring that the legitimate trade and travel our economy relies on can continue to flow swiftly through our ports," said Sen. John Cornyn, a Republican. (Photo: Manuel Balce Ceneta / AP)

They worry Michigan ports of entry, whether airports, sea ports or border crossings, could end up understaffed due to the reshuffling, potentially leading to increased wait times, fewer health-related inspections and weaker efforts to fight trafficking and other illegal activity.

“The vast majority of drugs that are smuggled into this country come through legitimate ports of entry, and having more CBP personnel in places like Port Huron will help us keep our communities safe and fight illegal activity like opioids trafficking," St. Clair County Sheriff Tim Donnellon said in a statement.

The bill has been endorsed by the Michigan Maritime Trades Council, Ford International Airport in Grand Rapids, and the Lansing Regional Airport Authority, as well as the National Border Patrol Council, the American Association of Port Authorities and the Federal Law Enforcement Officers Association.

"The Detroit-Windsor border crossing is one of the busiest in the entire country — and for too long we have had to work without adequate staffing to handle the workload,” Robert Holland, president of National Treasury Employees Union Chapter 173 in Detroit, said in a statement.

“Tasking overworked and fatigued officers with securing our ports of entry puts the safety of all Americans at risk. Unfortunately, this situation will only be exacerbated by the redeployment of officers to supplement staffing at the southern border. The first step in securing our borders is ensuring that we have the boots on the ground necessary to man our nation’s ports of entry."

While the bill would authorize the hiring of 600 CBP officers, money would still need to be appropriated to pay for the new hires.