Sarah Sanders says no culture of lying at the White House

The Mueller report says that Sanders told the special counsel’s team that her words were “a slip of the tongue.”

Sarah Sanders says no culture of lying at the White House 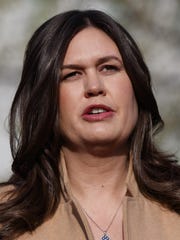 Washington – White House press secretary Sarah Sanders tried to do damage control on her credibility Friday, insisting that she hadn’t intentionally misled the American public about FBI Director James Comey’s firing despite telling the special counsel that her claim that “countless” agents had lost confidence in him was not founded on anything.

Sanders, who told special counsel Robert Mueller that her comment during a White House press briefing in May 2017 had been a “slip of the tongue” made in the “heat of the moment,” claimed in a series of television interviews that the sentiment behind her words – that many rank-and-file FBI agents had lost confidence in Comey and contacted the White House to say so – remained true.

“If you look at what I said, I said the ‘slip of the tongue’ was in using the word ‘countless,’ but there were a number of FBI, both former and current, that agreed with the president’s decision, and they’ve continued to speak out and say that and send notice to the White House of that agreement with the president’s decision,” she said on ABC’s “Good Morning America.”

“I said that it was in the heat of the moment, meaning it wasn’t a scripted thing,” she added on “CBS This Morning.” “But the big takeaway here is that the sentiment is 100% accurate.”

Sanders is among scores of current and former White House officials who were interviewed by Mueller’s team during the nearly two-year investigation that examined whether Trump’s campaign coordinated with Russia during the 2016 election and whether the president tried to interfere with the inquiry.

Mueller concluded his investigation last month and Attorney General William Barr released a redacted version of the special counsel’s report on Thursday. Mueller found no evidence of conspiracy between the campaign and Russia but also made no clear verdict on the question of obstruction.

A section of the report that references Comey’s firing by Trump notes Sanders telling reporters that the White House had heard from “countless” FBI agents who had lost confidence in Comey’s ability to lead the bureau. She dug in when a reporter pushed back, asking, “I mean, really?”

“Between like email, text messages, absolutely,” she responded, claiming that there had been at least 50 contacts.

But Mueller’s report found that the “evidence does not support those claims.”

“The President told Comey at their January 27 dinner that ‘the people of the FBI really like (him),’ no evidence suggests that the President heard otherwise before deciding to terminate Comey, and Sanders acknowledged to investigators that her comments were not founded on anything,” the report said.

Sanders, who spoke to Mueller’s investigators under oath, told them her use of the word “countless” was a “slip of the tongue.”

“I’m sorry that I wasn’t a robot like the Democrat Party that went out for 2½ years and stated time and time again that there was definitely Russian collusion between the president and his campaign, that they had evidence to show it and that the president and his team deserved to be in jail, that he shouldn’t be in office when, really, they were the ones that were creating the greatest scandal in the history of our country,” Sanders said on ABC.

This isn’t the first instance in which the credibility of Sanders, who speaks for the White House and is paid by American taxpayers, has come under scrutiny.

The White House had failed to disclose the reimbursement. Sanders said she didn’t know anything about the repayment until Giuliani disclosed it.

At least one publisher said the credibility problems that existed for Sanders before Mueller’s report have worsened after it.

“This now documented, on-the-record, under-oath episode, I think it completely obliterates her credibility,” said Kyle Pope, editor-in-chief and publisher of Columbia Journalism Review. “I remember watching and thinking there is no way countless FBI people called up Sarah Sanders. It stretched credulity just on its face.”

Pope said the episodes raise questions about why any reporter would attend Sanders’ briefings, which she has scaled back from daily to about monthly, or “put stock” in what she says.

Frank Sesno, director of the School of Media and Public Affairs at the George Washington University, said credibility is the only currency a press secretary has to offer.

“When you throw it overboard or devalue it, you do so at your own peril. I think that Sarah has a lot of explaining to do, which should be done forthrightly and honestly about the disparity in her comment,” said Sesno, a former White House correspondent for CNN.

Sesno continued: “The public and the media expect partisans and press secretaries to spin,” or attempt to put a rosier face on less-than-flattering situations. “They don’t expect them to lie. If you’re caught in a lie, you should acknowledge it and figure out whether you can repair your reputation.”