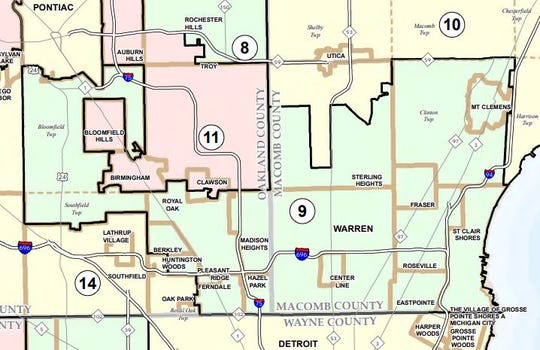 Washington — Republican lawmakers on Friday asked the U.S. Supreme Court to halt a court order to redraw legislative and congressional districts in Michigan by Aug. 1.

Attorneys for congressional and statehouse lawmakers filed an emergency application to suspend the judgment of a federal court panel, pending the outcome of similar cases that the High Court is expected to decide before July.

The request was expected after GOP lawmakers last week filed a notice of intent to appeal the case to the Supreme Court.

The application from state House Speaker Lee Chatfield, R-Levering, and GOP members of Michigan's congressional delegation was addressed to Justice Sonia Sotomayor, who oversees cases from the circuit of federal courts that includes Michigan.

Attorneys for the lawmakers wrote that by prohibiting the use of congressional and legislative maps in effect since 2012, the lower court "foregoes any semblance of respect for state sovereignty."

They were responding to the three-judge panel that ruled unanimously last month that current maps approved by the Legislature in 2011 are unconstitutional because they diluted the power of Democratic voters in an effort to ensure GOP power.

The ruling requires Michigan officials to redraw by August at least 34 congressional and legislative districts for the 2020 election cycle and hold special elections two years early for the state Senate.

Attorneys for the Republican lawmakers argued in Friday's filing that state legislators won't have sufficient time to redraw the maps by the District Court's deadline, in addition to passing a budget and legislation on auto insurance and infrastructure.

The court order not only requires new maps but it requires lawmakers to provide to the detailed rationales for any new districts it creates, as well as who lawmakers consulted both formally and informally during the process.

"Put simply, all of the mandates of the District Court’s order must be done under unsettled legal principles that this court is currently reviewing in other cases," the attorneys wrote.

Republicans have argued that the ruling poses a “substantial encroachment into the state legislative process," as the Michigan Constitution currently vests redistricting power in the Legislature.

Any newly drawn maps would be short-lived. Michigan voters last fall approved a ballot measure to create an independent commission to draw new lines staring in 2022.