“I would never have allowed anyone to interfere with the (Russia) investigation,” the former deputy attorney general said 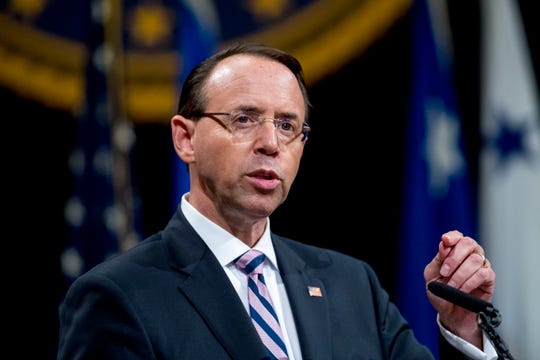 "At my confirmation hearing, I promised that I would conduct the investigation properly and see it through to the appropriate conclusion,” Rosenstein said. “In my business, you keep promises.” (Photo: Andrew Harnik, AP)

Washington – Fresh out of his job as deputy attorney general, Rod Rosenstein said Monday that the Justice Department’s investigation into Russian election interference was “justified,” that he would have never allowed anyone to interfere with it and that closing it had not been an option.

He also took aim at former FBI Director James Comey, characterizing him as a “partisan pundit” busy selling books and earning speaking fees. The barbs continued an extraordinary public spat between the two law enforcement officials, coming days after Comey said in a television interview that he didn’t view Rosenstein as a person of high character.

The speech before a Baltimore advocacy group for business and civic leaders marked Rosenstein’s most expansive remarks on the recently concluded probe into Russian election interference and potential coordination between the Trump campaign and Russia. In it, Rosenstein repeatedly distanced himself from President Donald Trump — who has decried the investigation as a hoax and witch hunt — and sought to burnish a legacy for himself as a protector of the Justice Department’s independence who tried to do what he thought was right regardless of public criticism.

“I was responsible for overseeing that investigation,” Rosenstein said, according to his prepared remarks. “I knew from preliminary briefings with the agents and prosecutors that it was an important investigation. If it was not done correctly, there would always be lingering doubts about the scope of Russian efforts and the extent of American involvement.

“I would never have allowed anyone to interfere with the investigation,” he added.

Rosenstein’s resignation took effect last week, but the speech Monday night made clear he is likely to remain a public figure in the months ahead and underscored a desire to explain and even justify a decision-making process that has come under heavy scrutiny by Democrats and Republicans alike.

He used his speech, his second of the day, to defend some of the most contentious actions of his tenure, including his role in Comey’s firing — he wrote a memo the White House held up as justification for it — and his subsequent appointment of special counsel Robert Mueller to lead the Russia investigation.

He said Mueller’s appointment was necessary to preserve public confidence in the Justice Department and to resolve the investigation in a way that would protect America from foreign adversaries. He said he knew not everyone was happy with the move — a likely reference to Trump and congressional Republicans — and it would be unpleasant for him and his family.

Perhaps his most pointed comments were reserved for Comey, whom he had criticized in a May 2017 memo for his handling of the Hillary Clinton email investigation, including his decision to publicly announce that the FBI was not recommending charges.

He said in his speech that though he did not blame Comey for being upset with him, “now the former Director is a partisan pundit, selling books and earning speaking fees while speculating about the strength of my character and the fate of my immortal soul.

“That is disappointing,” Rosenstein added. “Speculating about souls is not a job for police and prosecutors. Generally we base our opinions on eyewitness testimony.”

He also said the memo was “correct” and “reasonable under the circumstances,” even if Trump’s reasons for firing Comey were different from his own.

Two days after firing Comey, Trump acknowledged in a television interview that he was thinking of “this Russia thing” when he made the move. Rosenstein said no one had told him what reasons for firing Comey should be put in the memo — though Mueller’s report says Rosenstein had been asked to reference Russia, a request it says he rejected — and said he was never told that dismissing Comey was meant to shut down the investigation. He said he did not believe that firing Comey would affect the investigation.

In a clear break from Trump, though, he said that if he had been in charge of Comey’s firing, “the removal would have been handled very differently, with far more respect and far less drama.”