A pro-Trump state lawmaker plans to challenge U.S. Rep. Justin Amash in the 2020 GOP primary, saying Amash is "out of touch" with his district. 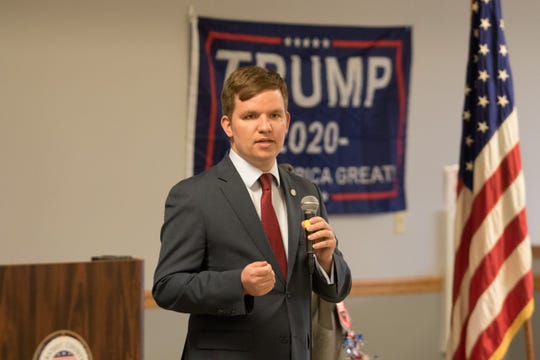 A pro-Trump state lawmaker in his second term said Monday he plans to challenge U.S. Rep. Justin Amash in the Republican primary in 2020, saying the West Michigan congressman is "out of touch" with his district.

Amash, a fifth-term congressman, is the first Republican lawmaker in Congress to break with Trump over the findings of special counsel Robert Mueller's Russia investigation.

Lower, a Cedar Lake Republican and former Amash supporter, was planning to launch his campaign around the Fourth of July. But he adjusted his timetable after Amash's statements on impeachment, which he said could not stand.

“After what happened on Saturday, it just made sense to get in right away and make sure people in the community knew there was a pro-Trump conservative ready to take him on," Lower said in an interview.

"I just got tired of him attacking our president and not providing any real solutions to anything. It’s easy to be a no vote all the time — you see that in Lansing sometimes, too," Lower added.

"But what takes actual talent is working with your colleagues and realizing it's a team and compromising with the party and people on the other side of the aisle."

The congressman, an early supporter of the independent probe into Russian interference in the 2016 election, pressed forward Monday afternoon with more impeachment commentary.

In a new series of tweets, he offered rebuttals to various arguments that Trump cannot be impeached for allegedly obstructing the investigation.

People who say there were no underlying crimes and therefore the president could not have intended to illegally obstruct the investigation—and therefore cannot be impeached—are resting their argument on several falsehoods:

Amash, 39, has faced primary challengers in the past. The former state lawmaker defeated Grand Rapids-area businessman Brian Ellis in the 2014 GOP primary by nearly 15 percentage points after Ellis spent $1.7 million.

Amash shared his conclusions about Trump's conduct in a series of tweets Saturday after finishing reading the entire redacted version of Mueller's report.

Contrary to the public statements and summary offered by Attorney General William Barr, "Mueller’s report reveals that President Trump engaged in specific actions and a pattern of behavior that meet the threshold for impeachment," Amash wrote.

"In fact, Mueller’s report identifies multiple examples of conduct satisfying all the elements of obstruction of justice, and undoubtedly any person who is not the president of the United States would be indicted based on such evidence."

Here are my principal conclusions:
1. Attorney General Barr has deliberately misrepresented Mueller’s report.
2. President Trump has engaged in impeachable conduct.
3. Partisanship has eroded our system of checks and balances.
4. Few members of Congress have read the report.

Amash also said Barr intentionally "misled" the public about Mueller's findings and said few of his colleagues Congress "even read Mueller’s report; their minds were made up based on partisan affiliation."

Mueller concluded there was no criminal conspiracy between Trump’s presidential campaign and Russia. He did not reach a conclusion on whether Trump obstructed the investigation, leaving that up to Congress.

The president lashed out in response to Amash on Sunday morning.

“Never a fan of @justinamash, a total lightweight who opposes me and some of our great Republican ideas and policies just for the sake of getting his name out there through controversy,” Trump tweeted. "Justin is a loser who sadly plays right into our opponents hands!”

Republican House Leader Kevin McCarthy dismissed Amash’s comments as an attempt to get national attention and dismissed his seriousness.

“He votes more with (Democratic House Speaker) Nancy Pelosi than he ever votes with me,” McCarthy said. “It’s a question whether he’s even in our Republican conference as a whole.”

Amash voted against his party about a third of the time in the last two years, while the average House Republican voted against the party 5 percent to 7 percent of the time, according to an analysis by ProPublica.

He said it will be interesting to see whether Michigan GOP Chairwoman Laura Cox and two RNC members agree to sign a waiver allowing the party and RNC to spend money against an incumbent in a contested primary.

This has not happened to date, an RNC official said Monday.

"The RNC can’t spend a penny against Amash without a waiver," Lennox said. "If I were Amash, I would pull a Macomb County move and recruit one or two challengers to split the vote against him."

The NRCC does not get involved in primaries, spokeswoman Carly Atchison said.

Tom Norton, a former Sand Lake village trustee, has also filed to run against Amash in the primary. Norton ran unsuccessfully in 2014 for the state House in District 73.

Democrats should try to find a decent candidate to run against Amash, as the district "definitely leans right but is sneakily competitive," said Kyle Kondik of the University of Virginia Center for Politics.

"Kent County is going to be an important weather vane in the Michigan presidential and Senate races — it seems to be trending Democratic even as much of the rest of the state outside the Detroit Metro area is trending the other way," Kondik said.

Lennox added that the race could be further complicated by the Libertarian Party holding a primary in 2020, potentially siphoning votes from Amash — a libertarian Republican — in the GOP primary.

Amash has not shied from bucking party leadership before, voting based on his principles and conscience and expressing frustration with partisanship in Congress.

He never endorsed Trump and has not attended any of the six campaign rallies that Trump has held in the Grand Rapids area since the New York businessman's campaign for president began in June 2015.

Lower endorsed Trump in October 2016, a few weeks after the release of the controversial 2005 "Access Hollywood" tape in which Trump made lewd comments about groping women.

"He has said and done some things that I certainly do not approve of," Lower wrote in a newspaper commentary.

"However, his campaign is about America. It is about policies that will help the people in communities like the 70th District. Making America great again starts with putting America first."

In his campaign announcement, Lower criticized Amash for voting against some of Trump's priorities, including his national emergency declaration on the border that Amash viewed as executive overreach.

"In the 10 years he’s been in D.C., the only bill he’s had signed into law was to rename a post office," Lower said.

"I was basically outraged by that and the fact that he consistently votes against issues that I care about and the community cares about."

Lower also highlighted reports from earlier this year that the Amash has not ruled out a 2020 run for the White House on the Libertarian Party ticket.

“I just became completely disillusioned over time when I realized that the values that he espoused weren’t being put into actual legislation or anything getting done,” Lower said.

“I would argue that we actually have very similar principles but the difference in him and me is I get something done. I actually turn those into real change for the community.”

Lower previously served as an Ionia County commissioner and was elected to the Legislature in 2016.

In Lansing, he's focused on reducing the state’s debt and unfunded liabilities, as well as reducing barriers to returning people to work, such as duplicate licensing requirements, he said.

He chairs of the House Local Government and Municipal Finance Committee and is vice chair of the Tax Policy Committee.

Lower, 31, grew up in Ionia County and graduated from Michigan State University and later earned a master's in business administration from Grand Valley State University.

Lower said he has met with grassroots activists, party leaders, donors and others in the  district, and "the response has been humbling and gratifying." He estimated it would take $1 million to beat Amash.

"We believe we can raise that amount and more,” Lower said. “West Michigan deserves a congressman who will actually represent the values of our community, and who will work with President Trump and other members of Congress to get things done."