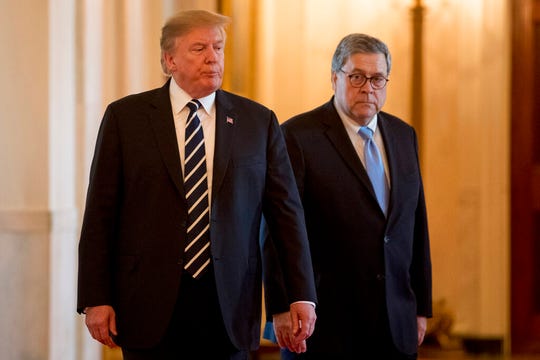 President Donald Trump and Attorney General William Barr arrive in the East Room of the White House, Wednesday, May 22, 2019. Trump wants the intelligence community to “quickly and fully cooperate” with Barr’s investigation of the origins of the multi-year probe into whether Trump’s 2016 campaign colluded with Russia. (Photo: Andrew Harnik, AP, File)

Washington – President Donald Trump directed the U.S. intelligence community on Thursday to “quickly and fully cooperate” with Attorney General William Barr’s investigation of the origins of the multi-year probe of whether his 2016 campaign colluded with Russia.

The move marked an escalation in Trump’s efforts to “investigate the investigators,” as he continues to try to undermine the findings of special counsel Robert Mueller’s probe amid mounting Democratic calls to bring impeachment proceedings against Trump.

Press secretary Sarah Sanders said in a statement that Trump is delegating to Barr the “full and complete authority” to declassify documents relating to the probe, which would ease his efforts to review the sensitive intelligence underpinnings of the investigation.

Barr has already asked John Durham, the U.S. attorney in Connecticut, to examine the origins of the Russia investigation to determine whether intelligence and surveillance methods used during the probe were lawful and appropriate. Still, Barr has been directly involved, according to a person familiar with the matter who was not authorized to discuss it publicly, and is also working with CIA Director Gina Haspel, Director of National Intelligence Dan Coats and FBI Director Christopher Wray.

Trump has frequently claimed his campaign was the victim of “spying,” though the intelligence community has insisted it acted lawfully in following leads in the Russia investigation and conducted surveillance under court order.

Despite Mueller finding no evidence to support criminal charges against Americans related to Russia’s actions, his report documented extensive Russian efforts to interfere in the 2016 campaign and willingness on the part of some in Trump’s orbit to accept their aid.

“Today’s action will help ensure that all Americans learn the truth about the events that occurred, and the actions that were taken, during the last Presidential election and will restore confidence in our public institutions,” Sanders said.