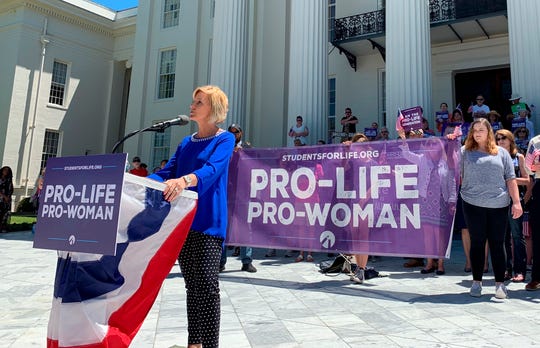 In this May 22, 2019, photo, Beck Gerritson, president of Eagle Forum of Alabama, speaks at an anti-abortion rally outside the Capitol in Montgomery, Ala. (Photo: Kim Chandler, AP)

Washington – A flood of laws banning abortions in Republican-run states has handed Democrats a political weapon heading into next year’s elections, helping them paint the GOP as extreme and court centrist voters who could decide congressional races in swing states, members of both parties say.

The Alabama law outlawing virtually all abortions, even in cases of rape or incest, is the strictest so far. Besides animating Democrats, the law has prompted President Donald Trump, other Republican leaders and lawmakers seeking reelection next year to distance themselves from the measure.

Their reaction underscores that Republicans have risked overplaying their hand with severe state laws that they hope will prod the Supreme Court, with its ascendant conservative majority, to strike down Roe v. Wade, the 1973 decision that legalized abortion. It also illustrates the way that those statutes are forcing the GOP to struggle over how to satisfy its core anti-abortion supporters without alienating the vast majority of voters averse to strictly curbing abortion.

The Alabama law is “a loser for Republican candidates in Colorado, without question, and in many other swing parts of the country, because it’s extreme,” David Flaherty, a Colorado-based Republican consultant who’s worked on congressional races around the country. “It’s only going to widen the gender gap.”

Brian Fitzpatrick, a Vanderbilt Law School professor and former aide to Sen. John Cornyn, R-Texas, said there are many “women, moderate women who are going to be scared that this right that they thought they had for the last 40-some years is going to be shelved” and they will be motivated to vote.

GOP Sens. Joni Ernst of Iowa and Susan Collins of Maine, both seeking reelection next year, said the Alabama ban goes too far by eliminating exceptions for pregnancies involving rape or incest. A 2005 survey by the Guttmacher Institute, which backs abortion rights, found about 1% of women said they had abortions because of rape or incest.

Democrats see the statutes as a way to weave a broader message about Republicans.

“You use it as an example of what they do when they’re unchecked,” said Rep. A. Donald McEachin, D-Va., a leader of the Democratic Congressional Campaign Committee, House Democrats’ campaign organization. “I think it drives moderate Republicans away from their party.”

Democratic presidential contenders are competing to lambast the Alabama law, which allows exceptions when the mother’s health is endangered. Sen. Kirsten Gillibrand, D-N.Y., called it an “existential threat to the human rights of women,” while former Vice President Joe Biden said GOP hopes of striking down Roe v. Wade are “pernicious and we have to stop it.”

Campaign Facebook and Twitter accounts of Democrats seeking reelection next year, such as Sens. Doug Jones of Alabama and Jeanne Shaheen of New Hampshire, are littered with posts attacking the harsh restrictions. “The people of Alabama deserve to be on the #rightsideofhistory – not the side of extremists,” Jones tweeted.

Georgia, Kentucky, Louisiana, Mississippi and Ohio have enacted or neared approval of measures barring abortion once there’s a detectable fetal heartbeat, which can occur in the sixth week of pregnancy, before a woman may know she is pregnant. Missouri lawmakers approved an eight-week ban.

The federal Centers for Disease Control and Prevention says that of the 638,000 abortions it tallied in 2015, almost two-thirds were performed within the first eight weeks of pregnancy. About 1% were performed during or after the 21st week.

Spotlighting the perilous political territory Republicans are navigating, an April poll by the nonpartisan Kaiser Family Foundation found that Americans support Roe v. Wade by 2-1. A Gallup poll last year found that 57% of adults who described themselves “pro-life” nonetheless said abortion should be legal if the pregnancy results from rape or incest.

The focus on the state measures has also stolen GOP momentum on abortion. Until now, congressional Republicans had spent much of this year forcing Democrats onto the defensive, goading them into blocking bills aimed at curbing the rare abortions performed late in pregnancies and misleadingly accusing them of supporting infanticide.

“Obviously, the attention has shifted,” said Sarah Chamberlain, president of the Republican Main Street Partnership, which represents dozens of moderate GOP lawmakers. She said while her group doesn’t think Democrats’ focus on the harsh laws has gained traction, “We are talking about that and how it’s going to play in our districts.”

Some Republicans say the Democratic drive will have minimal impact because the abortion issue drives relatively few voters from each party. Others say GOP candidates should accuse Democrats of extremism by opposing bills restricting abortions late in pregnancy and, if they wish, cite their support for exempting rape and incest victims.

Democrats have “never seen an abortion they don’t like,” said David O’Steen, executive director of the National Right to Life Committee.

Added Sen. Todd Young, R-Ind., who heads the National Republican Senatorial Committee, the Senate GOP campaign arm: “We’re not Alabama state representatives, we’re United States senators. And each of us has to make our positions known.”

Yet the laws have generated energy among abortion-rights groups, which held more than 500 demonstrations and other events this past week. “We will power this movement into 2020. There will be political consequences,” said Ilyse Hogue, president of NARAL Pro-Choice America.

Trump and House Minority Leader Kevin McCarthy, R-Calif., distanced themselves early last week from the Alabama statute. They were joined Wednesday by Senate Majority Leader Mitch McConnell, R-Ky., who told The Associated Press, “My position remains unchanged for 25 years. I’m opposed to abortion except in cases of rape, incest and the life of the mother” being in jeopardy.