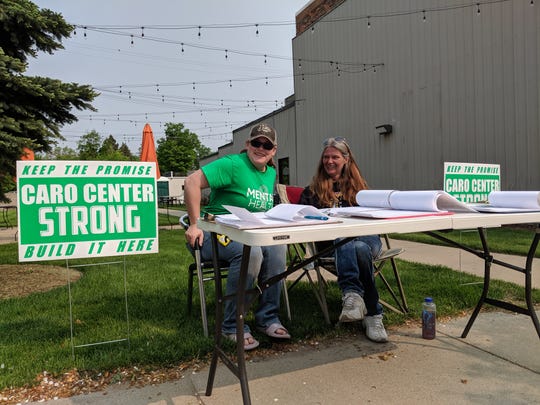 Katie Ozorowicz, 28, and Reamy Berlin, 41, collect signatures for a Caro Center petition on May 31, 2019. (Photo: Jonathan Oosting | The Detroit News)

The controversy involves the Caro Center, a facility with up to 150 patients and 350 workers in Michigan's thumb area, making it the region’s second largest employer.

“I can’t picture my life without this job,” said Reamy Berlin, who is set up at the annual Cars and Crafts show collecting signatures for a petition that will be sent to Whitmer. “I’ve done home care, and I’ve done long-term care, and I haven’t had the drive that I have at this place. It’s turned into my passion.”

That passion has led the 41-year-old registered nurse to make saving the Caro Center her “second job.” Berlin estimates she has spent $5,500 of her own money printing green “Caro Strong” yard signs and t-shirts that have become the ubiquitous calling cards of a grassroots movement.

“I care about people,” she said of the effort and personal expense. “It’s why I became a nurse. I want what’s best for all of them, the patients and the staff.” 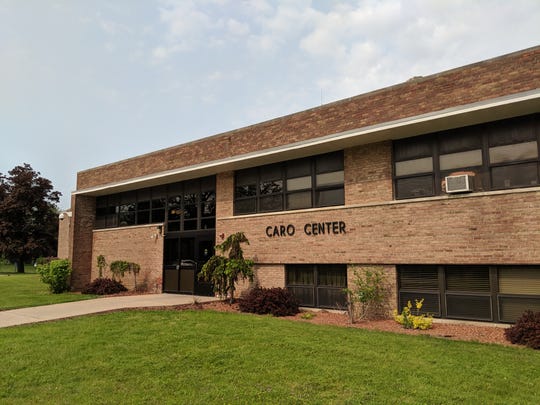 Residents in Caro, whose population is just north of 4,000, are living on edge after the Whitmer administration in March halted plans to rebuild the state psychiatric facility that first opened here in 1914.

Citing concerns over staffing shortages and the inability to recruit a permanent psychiatrist for the Tuscola County hospital, the Department of Health and Human Services hired a review team that is assessing previously approved construction plans and state needs.

The review process was initially slated to wrap up by the end of June, but the timeline has "been extended to allow for additional stakeholder and public input," said health spokeswoman Lynn Sutfin, noting plans for a community forum before final recommendations.  "We are looking at a mid-July due date."

The Caro Center's employees could be fired or offered transfer options if the facility is ultimately closed. That prospect looms large for Katie Ozorowicz, 28, who has a 10-month old son. She and her boyfriend both work at the hospital.

“We’d both be out of a job,” Ozorowicz said. “I am going to school for my nursing degree, but it would be devastation until that is done. My plan was to stick to mental health, but if it closed, I’d have to pretty much drive to Detroit to do mental health.” 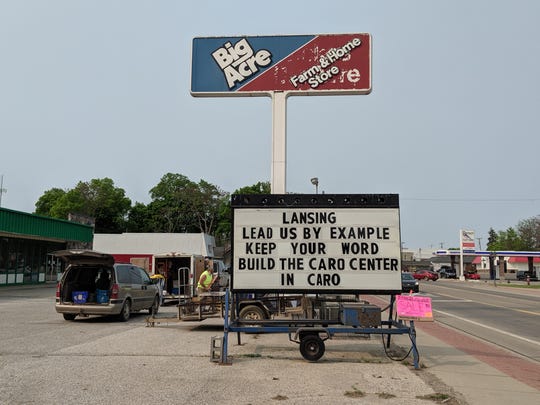 A sign outside the Big Acre Farm & Home Store in Caro asks Lansing officials to "keep your word" and rebuild a state psychiatric hospital. (Photo: Jonathan Oosting | The Detroit News)

“I really feel like the credibility of the Dept. is at stake,” health department Legislative Affairs Director Karla Ruest said in a March 3 email to Chief Deputy Director Elizabeth Hertel, suggesting even a temporary halt would make it seem like "everything can change" and no decision is final.

“I also think it will build a wedge between Republicans and Democrats," Ruest wrote in the email, obtained through a Freedom of Information Act request. "It will look like the Democrat Governor is going back on the deal. This should have been done last year. We should have made the hard decision then.”

Led by local state Rep. Phil Green of Millington and Sen. Kevin Daley of Lum, the GOP-led Legislature has pushed back against potential closure. Budget bills approved by the Senate and advancing in the House would places restrictions on funding to ensure it only finances the continuing operation or new construction on the Caro Center site but not another facility if Whitmer closes the center.

“It is the intent of the Legislature that the Caro Regional Mental Health Center shall remain open and operational at its current location on an ongoing basis,” the 2020 Senate budget reads.

The language ensures the Legislature will be “part of all the decision-making when it comes to what we’re doing at Caro,” said Sen. Pete MacGregor, a Rockford Republican who chairs the Health and Human Services budget subcommittee. “Our fear was they’d draw down all the (full-time employees) from Caro, move them to other places and just close Caro.”

Whitmer is also facing pressure on the political left from labor unions like AFSCME Council 25, which represents more than 200 workers at the Caro Center and has launched a social media campaign to highlight their plight and the impact of potential closure.

“It’s not a question of whether or not there’s just a few disgruntled workers who are (angry) because they’d have to move somewhere,” said President Lawrence Roehrig. “This is about committed folks who brought their families to the community and have put down roots and should not be subject to a political decision on where the facility is located.”

Roehrig noted that unions and Republicans lawmakers — “non-traditional allies of the labor movement,” he called them — had previously united around Caro Center's rebuild plans and remain optimistic the project will move forward.

Union leaders have been in contact with the administration and have had a “face-to-face” meeting on the issue with Whitmer, an East Lansing Democrat, Roehrig said.

“It is and continues to be the position, and my understanding with my good, trustful, truthful friend Gov. Whitmer that no final decisions are made and anything that’s done, this union and others affected will be at the table,” he said. “I find that honorable and fair. I don’t want any false promises that no one is willing to live up to.”

Facing the potential loss of a major employer, Caro and surrounding communities have banded together for an effort to save the hospital and continue the rebuild.

Green yard signs stretch to neighboring towns like Millington. A sign outside the Big Acre farm and home store in Caro asks Lansing to "lead us by example" and "keep your word." Caro Community Schools paid to erect at least three billboards urging Whitmer to "keep the promise" and "keep it here."

Closing the psychiatric hospital could have a "devastating impact" on students with parents who work at the Caro Center or own local businesses that cater to hospital employees, said City Manager Michael Silverman, predicting the economic fallout could affect the "entire Thumb region."

The hospital been part of local culture for more than a century, Silverman said. "It's provided excellent jobs to many citizens in the area, but it's also been an excellent location for patients who want to live in an area that has less stress and is less taxing on their mental health and well-being," he said.

Local officials and residents have invited Whitmer to visit the city, and local governments across the region have adopted resolutions supporting the Caro Center project, Silverman said.

Whitmer's office declined comment on the local campaign to save the psychiatric hospital, but spokeswoman Tiffany Brown said the administration has "been in communication with the city manager."

Asked if the administration is developing plans to reduce the economic impact if the Caro Center is closed, Brown said she did not want to "speculate" amid the consultant review because "no final decisions have been made."

Private emails previously reported by The News show Whitmer administration officials have expressed serious doubts about the fate of the hospital.

The Snyder administration raised alarm bells in December in a request for supplemental funding to help address “several, seemingly intractable problems in bringing clinical staff” to Caro. The budget briefing cited the inability to lure a psychiatrist to the facility “in part due to its remote, rural location."

Tuscola County Controller Mike Hoagland predicted that rebuilding Caro Center as a “state of the art” facility will help lure qualified professionals to the psychiatric hospital. Delaying the project hurts patients, he argued.

“The land is zoned. The infrastructure is in place. We’re just scratching our heads," Hoagland said. "What is it they need to know that hasn’t already been answered?” 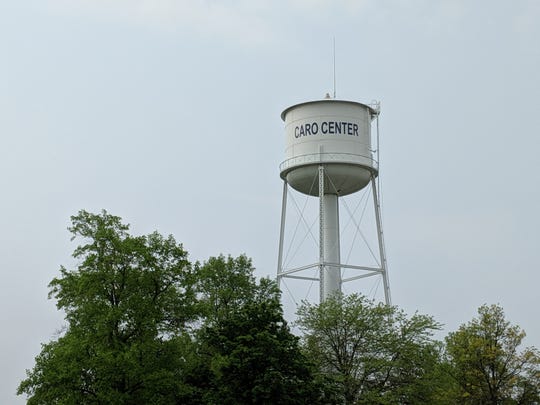 The name of the Caro Center psychiatric hospital adorns a nearby water tower in Caro, Michigan. (Photo: Jonathan Oosting | The Detroit News)

The Snyder administration began the rebuild after years of consideration, and the state had already spent about $3 million before halting pre-construction work in March. The health department is now paying the Myers and Stauffer LC consulting company $277,000 to review site options.

Meanwhile in Caro, "Facebook pages are being burned up" as hospital workers, local activists and officials make the case for continuing the rebuild, Hoagland said.

"I just think they feel they got handed a bad situation. Everybody here thought we were passed this, that the issue was resolved."