Athletic trainers and physical therapists would become mandatory reporters of child abuse or neglect under legislation approved by the Michigan House. 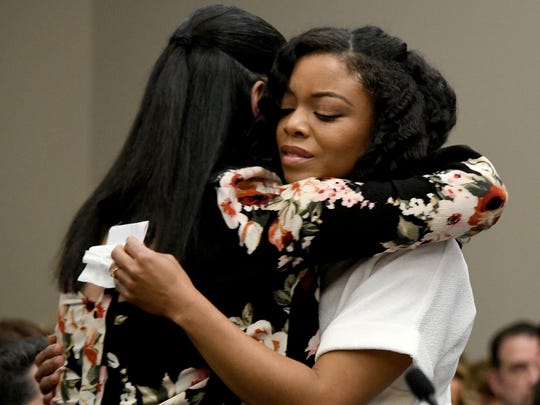 Lansing —The Michigan House approved by wide margins Wednesday legislation that would require athletic trainers, physical therapists and their assistants to report child abuse or neglect.

The bills now headed to the Senate stemmed from an effort last year to address some of the shortfalls that allowed Nassar to continue sexually assaulting young MSU athletes for years.

"As a former gymnastics coach and a former gymnast myself, this was really important to me that I could be part of this package," said Rep. Beth Griffin, R-Mattawan. "It's increasing the number of responsible adults that are in the positions that can better catch criminal sexual assault when it happens."

Tiffany Thomas Lopez, a former Michigan State softball player who was abused by Nassar, has said she told two MSU athletic trainers that Nassar digitally penetrated her during treatment for lower back pain. Thomas Lopez said she was told her pursuit of a complaint would "cause a lot of heartache" and "trauma."

The House legislation does not add coaches to the list of mandated reporters in part because of concerns regarding the burden it would place on the large number of volunteer or part-time coaches, Griffin said.

"I wanted to include them myself as a former gymnastics coach," she said, before noting that the bills approved Wednesday "do represent significant steps forward in helping protect kids."

The Michigan Physical Therapy Association testified in support of the bill in May, noting that physical therapists have unique access to children in a variety of settings and over multiple visits.

“During these multiple visits, PTs and PTAs are able to assess for atypical bruise patterns that can’t be explained by a fall, multiple bruises in various stages of healing, and whether injuries are consistent with the family reported mechanism of the injury,” the group said in its written testimony.

The legislation may result in an increased number of cases reported to the state. Each of Michigan's 1,605 Children’s Protective Services investigators handles an average of 12 cases at a time, according to the House Fiscal Agency's analysis.

Two other bills passed by the House Wednesday would prohibit individuals from using their position of authority to stop or retaliate against people under them who attempt to report a crime or a violation of Title IX rules at a post-secondary institution, specifically about child abuse or sexual assault.

“The Nassar case made it clear that very serious cases of sexual assault can go unreported,” Alexander said in a statement. “We must take steps to fix the problems brought to light and prevent sexual predators from preying on our children.”

Violations of the proposed laws would result in a one-year misdemeanor in most cases.

The bills were first introduced in May 2018 with other pieces of legislation that addressed the Nassar scandal. They were approved by the House at that time, but never made it to a vote of the full Senate.