Former Michigan Gov. Rick Snyder is turning down a one-year fellowship at Harvard University amid criticism over his role in the Flint water crisis 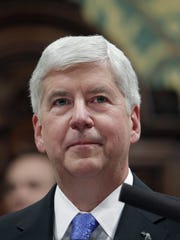 Former Michigan Gov. Rick Snyder has withdrawn from a planned one-year fellowship at Harvard University following intense criticism of the appointment and continued outrage over the Flint water contamination crisis.

The Ann Arbor Republican said he informed the Harvard Kennedy School of the decision Wednesday.

"While it would have been exciting to share my experiences both positive and negative, our country’s current political environment and its lack of civility would have likely created an environment that would be too disruptive at the Kennedy School," Snyder said in a statement posted on social media.

"I wish them the best in the coming academic year."

Harvard had emphasized Snyder's advocacy of civility in politics as one of the reasons it chose him for the fellowship, but the appointment sparked swift and harsh online backlash, primarily from the political left.

The university did not immediately respond to a request for comment. But in a Wednesday email to faculty, staff and students, Kennedy School Dean Douglas Elmendorf described Snyder’s withdrawal as a mutual decision and said he was “deeply moved” by messages he has received from people in Flint.

“I believe the Kennedy School needs to study both failures and successes of government, and we anticipated that students would have learned from engaging with and questioning governor Snyder about his consequential role in decisions regarding Flint and many other issues during his eight years in office,” Elmendorf wrote.

“We appreciate governor Snyder’s interest in participating in such discussions in our community, but we and he now believe that having him on campus would not enhance education here in the ways we intended.”

Snyder was expected to serve as a senior research fellow at the Kennedy School's Taubman Center for State and Local Government. The school is named for late U.S. President John F. Kennedy, a Harvard alumnus, and A. Alfred Taubman, a late Detroit-area philanthropist whose gift of $15 million in 1988 created the program.

Former Michigan Democratic gubernatorial candidate Abdul El-Sayed and other critics had blasted Snyder's appointment.  As of Wednesday morning, 6,804 people had signed an online petition calling on the university to rescind the fellowship.

“This is the same Rick Snyder that presided over the Flint water crisis that still haunts families in Michigan today,” said the Change.org petition, started by Tiffani Bell, a former Harvard fellow who now helps Michigan residents pay water bills through an organization called The Human Utility.

Bell told The Detroit News she is "proud of people coming together" around the petition and "happy for this outcome," joining other Snyder critics who celebrated his withdrawal from the fellowship.

“This is what people power in action looks like," said Lonnie Scott, executive director of the Progress Michigan liberal advocacy group. "People like Rick Snyder don’t get to take prestigious positions after poisoning cities and bowing down to corporate interests."

Former Lt. Gov. Brian Calley, who served with Snyder and earned his master of public administration degree from the Harvard Kennedy School, called it a “big loss” for the university.

"But I don't blame Gov. Snyder for turning it down," Calley said. "He is still very much about relentless positive action. The last thing he would want is to distract from the education of students because of protests."

Snyder has publicly apologized for the Flint water crisis and acknowledged state regulators failed to ensure the city used proper corrosion control chemicals when it switched water sources in 2014, causing lead to leach from aging pipes and into the drinking supply.

The former governor has never been charged with a crime but was recently re-instated as a defendant in a major class-action lawsuit against the state.

Adam Joseph, a Michigan native and Harvard graduate who worked on El-Sayed's gubernatorial campaign, said he is pleased to see "that the implications of crimes committed against Flint residents are being acknowledged."

"Now we can continue a dialogue about what it will take to make Flint residents whole," Joseph said, noting he had returned to Michigan to campaign against Snyder's record in communities like Flint.

Snyder had said he was excited to join faculty at Harvard and looked forward to "sharing my experiences in helping take Michigan to national leadership in job creation, improved government performance, and civility.”

His appointment was initially expected to begin this past Monday.