See the lineups for the upcoming Detroit Democratic debates

See the lineups for the upcoming Detroit Democratic debates 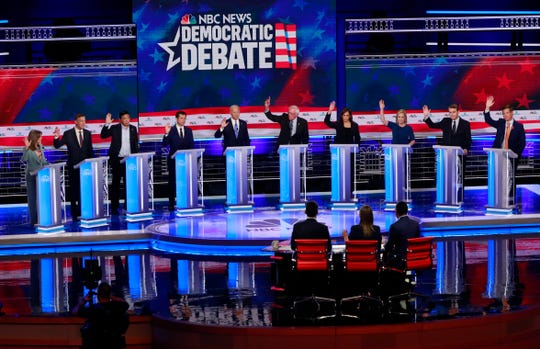 Vice President Joe Biden, who is leading in public polls, will appear on July 31 the second of back-to-back nights of debates at Detroit's Fox Theatre, along with Sen. Kamala Harris of California, who clashed with Biden on issues of race during the first set of debates in Miami last month.

The first debate night in Detroit on July 30 will feature progressive Sens. Elizabeth Warren of Massachusetts and Bernie Sanders of Vermont along with South Bend Mayor Pete Buttigieg. Former Rep. Beto O'Rourke of Texas and Sen. Amy Klobuchar of Minnesota also will be on stage the first night.

Candidates learned which nights they would be on stage the same time as viewers watching in real time on CNN.

The debates, the second after the June forums in Miami, will be broadcast live on the cable network from Detroit, scheduled to run from 9-11 p.m. each night.

"Biden would have probably preferred avoiding a rematch with Harris after what happened with Miami," said Aaron Kall, director of debate for the University of Michigan.

"There will be a lot of anticipation for the Biden-Harris sequel. People will have higher expectations for Harris this time, while Biden will be able to focus much of his fire and attention and predebate prep on her, as the three other top contenders are on the other night."

CNN and the Democratic National Committee had divided Thursday's drawing into three groupings to ensure candidates of comparable polling will be featured evenly over both nights.

Kall said CNN's open process for selecting the debate lineup was "much superior" to NBC's closed-door selections for the Miami debates.

The televised drawing offered transparency, plus the three tiers of candidate groupings guaranteed a more balanced field of 10 candidates each night, Kall said.

But while the six female candidates are evenly split between the two nights, all the non-white candidates happened to draw the second night, July 31, he noted.

This could help Biden, Kall said, by reducing the chances that he goes one-on-one with Harris if the issue of race comes up again.

Harris created a viral moment out of the Miami debates when she attacked the former Delaware senator over his remarks on working with segregationist colleagues and past opposition to federally mandated busing to integrate schools in the 1970s.

"Harris said being a woman of color meant that she had to participate in the discussion of race and segregation during the first debate," Kall said.

"If a similar topic is discussed on Wednesday, there could be several candidates itching to be part of the conversation, and this could prevent Biden from getting isolated with Harris again."

For many, Detroit will be their last chance to appear on the debate stage, as the DNC's criteria for the next debate, set for Houston in September, is much more stringent. As few as six candidates could qualify, Kall said.