In the battleground, Democratic presidential hopefuls are seeking advice from influential Michigan Democrats ahead of next week's Detroit debate

Democratic presidential hopefuls have been eager to connect with party leaders in Michigan, though few high-profile endorsements are flowing ahead of next week's debates in Detroit.

Over half of the field of 25 contenders have made early campaign stops in Michigan, underscoring the importance to Democrats of recapturing the state in 2020 after losing it to President Donald Trump by 10,704 votes in 2016. 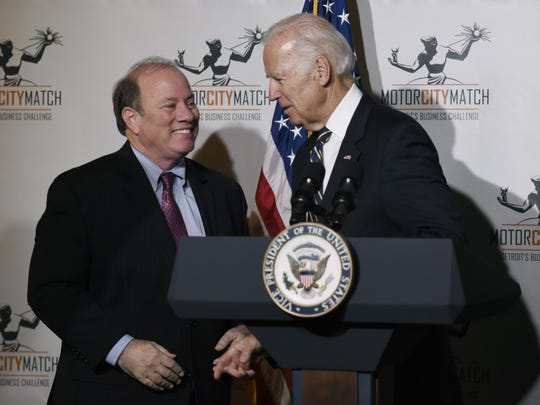 "It’s the only silver lining for Michigan losing in 2016 by such a close margin is the attention on Michigan in many respects this cycle," said Brandon Dillon, former chair of the state Democratic Party.

Former Vice President Joe Biden got a boost Tuesday with the endorsement of longtime ally and Detroit Mayor Mike Duggan, who called Biden "just a great friend of Detroit," according to the Associated Press.

"I'm going to do whatever he asks me to do," said Duggan, who is helping organize a Wednesday fundraiser in Detroit to benefit the Democratic front runner.

Most top elected officials in Michigan are holding off on endorsing in the race, but they're clearly pleased the state and its issues are getting high-profile attention.

Candidates are reaching out to Gov. Gretchen Whitmer, who garnered national buzz for her winning 2018 campaign that focused on issues without veering far left.

Whitmer said she has been contacted by “a lot of the candidates." While she takes every call, she said she is not going to be endorsing “any time soon."

Several presidential hopefuls have sought the counsel of the Debbies: Sen. Debbie Stabenow of Lansing and Rep. Debbie Dingell of Dearborn.

The latter famously predicted Hillary Clinton was in danger of losing the Wolverine State in 2016, even though she had polled ahead of Trump for months.

Dingell, with her deep ties to Democratic power brokers, has done multiple events with 2020 candidates in Michigan, including a May school stop with Sen. Kamala Harris of California and joining Sen. Amy Klobuchar of Minnesota to talk with domestic violence advocates, also in May. 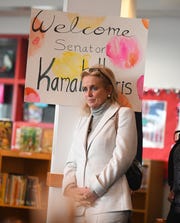 This month, she hit a campaign stop with Sen. Kirsten Gillibrand of New York, and visited the Veterans Affairs Hospital in Ann Arbor with Massachusetts Rep. Seth Moulton on July 2. The 65-year-old lawmaker also attended a minimum wage event with Montana Gov. Steve Bullock on Sunday, along with Democratic U.S. Reps. Brenda Lawrence of Southfield and Rashida Tlaib of Detroit.

"Many of these people are good friends. They respect me, I respect them, and they know I ran a presidential campaign in this state," Dingell said, referring to former Vice President Al Gore's 2000 campaign.

"They know I made strong recommendations a couple years ago that turned out to be right."

She doesn't want to be in that position again in 2020.

"I’ve talked to almost all of them and talking about the issues that I think matter in the Midwest: Trade, pensions, jobs, manufacturing, the environment, the Great Lakes, health care, prescription drugs," Dingell said.

"The candidate who wins is going to appeal to a lot of different people on issues. You can’t come into Michigan and ignore working men and women that come from the suburbs and the auto industry, etc.," she added.

"I’m doing the issues that I said we weren’t talking about last time, and we need to do a better job on."

Candidates are seeking out Stabenow as a Democrat who won reelection last fall in a Midwestern swing state won by Trump in 2016.

They include all of her Senate colleagues who are running and wanted to talk about the auto industry, manufacturing, agriculture and how people in general are feeling about the economy, she said.

"I tell all of them, we make things and grow things," Stabenow said. "We're very hardworking people who produce things, and that we all love our water and our Great Lakes."

She also isn't at the point of endorsing anyone.

"Seriously, all the people who are running are friends of mine. I think it's exciting to see so many people who are hardworking and ethical and bright and prepared to be president," she said.

"I'm just really happy that they're all coming to Detroit." 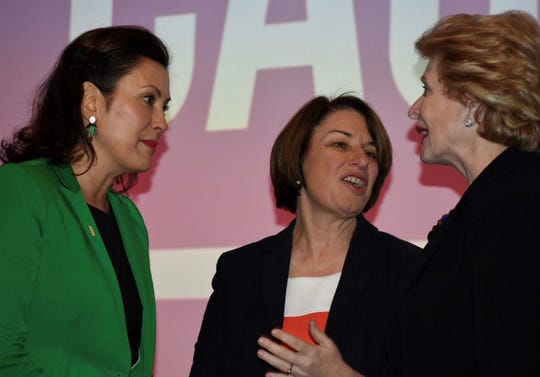 Sen. Gary Peters, who is up for reelection next year, also lists the Great Lakes as an issue a successful candidate in Michigan will have to address, as well as clean drinking water, job training, "fighting discrimination," "standing up for workers and organized labor," and tackling the rising cost of prescription drugs.

"Something is seriously wrong when a vial of insulin costs 10 times more here than it does on the other side of the Detroit River," Peters wrote in a letter this week to the 2020 presidential candidates.

Rep. Dan Kildee, D-Flint Township, has spoken with a number of the candidates to emphasize the nature of the Flint water crisis.

"I try to help them understand when it comes to a campaign, when it comes to the way they talk about it, we don't want Flint to be used as a photo opp or a punchline to a joke," Kildee said.

"We want it to be a real lesson on what happens when we don't invest in people and communities that get left behind. There's a real consequence to that."

Kildee said he isn't leaning toward any particular candidate at this time, but it's "kind of a strange experience" knowing so many of candidates in the field, including several House colleagues.

"This time, I know like half these people, and some of them are really good friends," he said.

Inslee visited Tlaib's Detroit district last month to tour the area near the Marathon refinery and tout his climate action plan in what he called Michigan's most polluted ZIP code. Tlaib said she was happy he spoke to residents in southwest Detroit about the poor air and water quality.

"I’m not leaning towards anyone. I’m trying to increase access to my residents to hearing these issues but also being able to ask questions that I think are really important," Tlaib said. "I want them engaged. I just know that when my district comes out, we win."

Tlaib has partnered in Congress with left-leaning 2020 candidates such as Sens. Bernie Sanders of Vermont and Elizabeth Warren of Massachusetts on legislation to reduce prescription drug prices and other initiatives.

Last week, she appeared in Washington with Warren to press for the Stop Wall Street Looting Act and signed on to a letter with Sanders urging the Department of Labor to investigate Amazon for workplace safety violations.

Sanders and Warren are hotly pursuing the endorsement of another member of the progressive "squad" of freshman — rising Democratic star New York Rep. Alexandria Ocasio-Cortez.

The endorsement of any member of the so-called squad — embroiled in a public sparring match with Trump — will have a "double edge," Democratic strategist T.J. Bucholtz said.

"With the importance of Michigan, I think the eventual nominee would like to have unanimous support from the delegation, and with Rashida — she’s a high-profile freshman with influence around the country," said Bucholtz, an adviser to Tlaib.

"It depends on which candidate you are, where you are in the polling and which endorsements suit you best. Rashida’s endorsement doesn’t suit everyone in the field. But as we get into 2020, her endorsement becomes more important," he added. "The 13th District matters for sure in terms of Michigan."

Whitmer, a first-term Democrat, has tamped down speculation she could be asked to join the eventual nominee as a vice presidential running mate, saying she is focused on governing Michigan.

But Whitmer is in demand and using the endorsement courting process to talk to candidates about issues important to the state, including Great Lakes protection, crumbling infrastructure and public education.

“This is a great chance for us to showcase some of the great things happening here in Michigan, but also challenges that we and other states have in the Midwest,” Whitmer said.

The governor in February issued an open invitation to every presidential candidate to visit Michigan, touting its swing-state status and importance in both the primary and general elections.

She has welcomed subsequent visitors on social media and in March joined Gillibrand at a Fems for Dems rally in Clawson.

But as of early July, Whitmer would not even commit to endorsing at some point closer to the primary, noting that yet another candidate — billionaire hedge fund manager Tom Steyer — was just entering the race.

“It’s far from a place where I would feel like that’s something that I should do,” she said.

“I want to do what’s right for the people of Michigan, and I want to make sure that any and all candidates are talking about the things that will improve the lives of people in our state.”