Sen. Bernie Sanders joined environmental activists calling for a shutdown of Enbridge’s controversial Line 5 pipeline in the Straits of Mackinac

Lansing — Bernie Sanders on Thursday joined environmental activists calling for a shutdown of Enbridge’s controversial Line 5 pipeline in the Straits of Mackinac.

The Vermont senator is the second Democratic presidential hopeful to speak out against the 66-year-old pipeline and renewed his proposal to ban on all new fossil fuel infrastructure. 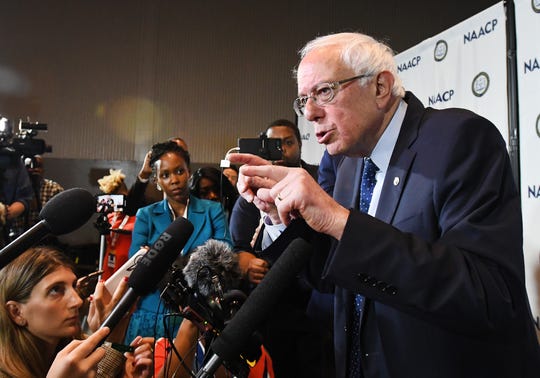 Washington Gov. Jay Inslee called for a shutdown two weeks ago and urged other candidates to join him ahead of the second round of presidential debates Tuesday and Wednesday in Detroit. He also criticized a $500 million Enbridge plan to move Line 5 into a protective tunnel beneath the Straits.

Sanders announced his position on the nine-year anniversary of a separate Enbridge pipeline rupture near Marshall that dumped more than 1.2 million gallons of oil into the Kalamazoo River. It was the worst in-land spill in U.S. history and resulted in a $177 million fine from federal officials and a $75 million settlement with the state of Michigan.

“Today, with the climate crisis worsening, we must #ShutDownLine5 pipeline in Michigan and ban all new fossil fuel infrastructure,” Sanders said on Twitter. “What we need is a Green New Deal.”

Like Inslee, Sanders did not specify how he would ensure adequate propane supplies to the Upper Peninsula and other parts of Michigan if Line 5 is shut down. The pipeline carries up to 540,000 barrels a day of light crude oil and natural gas liquids

Enbridge insists the dual pipeline is secure, but the Canadian firm wants to move Line 5 into a new $500 million tunnel beneath the Straits, which it had pledged to pay for as part of an agreement with Republican former Gov. Rick Snyder.

But new Democratic Gov. Gretchen Whitmer and Attorney General Dana Nessel have effectively blocked the project. The future of the tunnel and pipeline are now tied up in court after Whitmer and Enbridge were unable to negotiate a faster construction timeline.

"The tunnel solution is the best long-term opportunity to secure the energy needs of the State while making an already safe pipeline even safer," Enbridge spokesman Ryan Duffy said earlier this month.

Sanders is among a series of Democratic presidential hopefuls who co-sponsored a Green New Deal resolution in the Senate making the case for major spending on clean energy and infrastructure to reduce carbon emissions and fight climate change.

Republicans have railed against the non-binding resolution, arguing it could lead to a massive price tag if its goals are turned into policy. GOP majority leadership forced a vote on the resolution in March but Democrats protested by voting "present."

Sanders won Michigan’s Democratic presidential primary in 2016 and is expected back in the state on Sunday to travel from Detroit to Canada with diabetes patients seeking cheaper insulin.