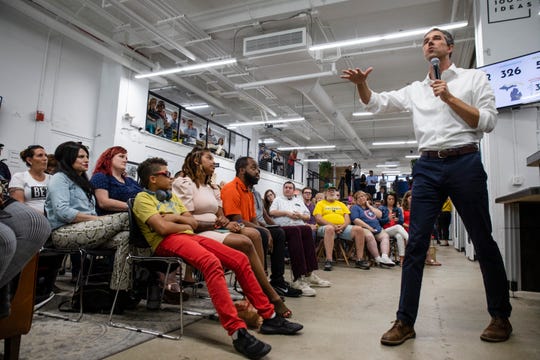 Flint — The spots on the arms of Keith Tomaszewski tell the story, he said, of how the long-running lead-contaminated water crisis here has affected his life and others.

But as 20 Democratic presidential candidates prepare to debate Tuesday and Wednesday in Detroit, Tomaszewski said he is not convinced any of them really care about him or other residents — even though four candidates already have visited the city and Flint is bound to come up on the nationally televised stage.

"I think it's going to be the same thing, just enough to get a little shine on the votes," said the 55-year-old Flint resident as he recently walked to a bus stop downtown. Tomaszewski fears he may have Legionnaires' disease and hopes to get checked soon.

"I don't think they are going to step in and do anything about it," he said. "I've got marks all over my skin."

The city was a frequent stop for presidential candidates in the 2016 race, including a Democratic debate televised on CNN five days before Michigan's primary election.

At the NAACP national convention in Detroit last week, the Flint water crisis was discussed by Michigan's Democratic U.S. Sens. Gary Peters of Bloomfield Township and Debbie Stabenow of Lansing. A few of the presidential candidates mentioned it during the convention's town hall forum, too.

What do Flint residents want to hear from the presidential candidates?

"I want to see some progress. (Flint) used to be a rich city. Now it's the poorest in the nation," Tomaszewski said, referring to the ranking among cities with at least 65,000 residents. "I'd like to see them get something done."

U.S. Rep. Dan Kildee, D-Flint Township, said he welcomes any candidate who wants to comes to Flint and promises "I'll meet with them, show them around and tell them our story."

"Flint has had this unique moment in the last several years, and it would be a mistake if the candidates take an overly simplistic view of what happened in Flint," Kildee said. "In other words, it wasn't just some mistake about the water — it's much bigger than that."

'We want our story told'

Flint activist Joelena Freeman said a lot of people outside of the city have forgotten about the water crisis that began in 2015 after the city changed water sources and "don't even have any idea that we're still in it."

State testing has found the levels of lead in the drinking water have been below the federal action standard of 15 parts per billion for more than two years. But state officials still recommend residents use a filter on their faucets and don't plan to recommend drinking the tap water unfiltered until the city finishes replacing all of lead water lines later this year.

A section of new copper pipe is readied as crews replace lead-tainted service lines at homes on the 1200 block of Durand in Flint, August 31, 2016. (Photo: David Guralnick, The Detroit News)

The attitude of "so many people" is similar to that of former Gov. Rick Snyder, who told last year told city officials to "get over" the state's ending of the free distribution of bottled water, she said, adding how frustrating it is for residents to hear the refrain.

"It's always good to hear about Flint (and its problems) but what hurts is when you start to feel like they are using you to gain points in their election," Freeman said. "We get that a lot here. A lot of people come in and set up shop and make money. At the same time, we want our story told so people aren't forgetting about us."

Mayor Karen Weaver said she hopes Flint won't be forgotten in the presidential race. She has already met with three candidates.

Flint and its issues with lead contamination are still important on a national scale because of the water contamination and Michigan's importance as a battleground state, she said.

"It's very important to come through Flint and have conversations with Flint because Flint still has needs and we know that Flint represents so many other cities around this country," Weaver said.

The mayor expects more candidates to swing though the city, which could give a boost to solving more of Flint's problems.

"One thing we know is if they do neglect us, we know who we will or will not support," Weaver said. "But we have time for them to come and visit Flint and that's what I'm going to expect to happen." 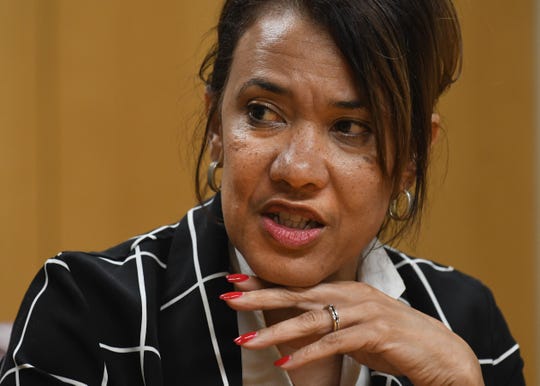 Flint Mayor Karen Weaver, interviewed in her office Wednesday, said, "One thing that has never changed is we've always said people need to be held accountable. And that means more than charges being pressed, it means charges and convictions." (Photo: Daniel Mears, The Detroit News)

Residents have welcomed politicians who highlighted their plight but have been critical, too.

Although President Barack Obama was immensely popular in Flint, his May 2016 visit to the city turned a little sour when he told a high school auditorium full of residents that the filtered water was safe to drink. Some among the 1,100 people at the event booed.

Paulette Foster, 57, said although she would love to see presidential candidates come through her city but she fears the talk will be just political rhetoric.

"I don't think anything is going to change," she said. "It hasn't improved in all this time. It will all be about politics."

Foster said she doesn't feel like Flint residents are abandoned, "but they haven't made any progress" on the problem so that people can feel confident about the water.

Tomaszewski said he isn't going to hold his breath that any of the Democratic candidates would help Flint. But highlighting that the problem hasn't abated, he acknowledged, is a good thing.

"I want to see some progress around here where you can actually drink the water without having to have it filtered," he said. "Like it used to be."