The Michigan Republican Party is crying foul over a $10,049 bill for internal documents about a new citizen redistricting commission. 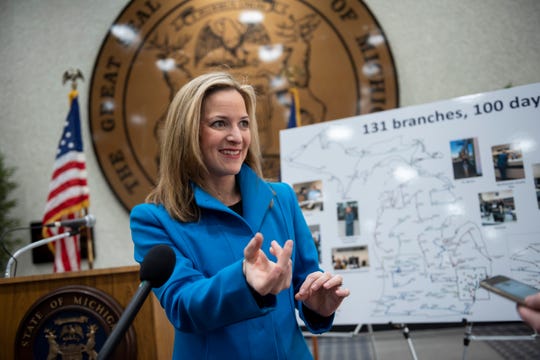 Lansing — The Michigan Republican Party is crying foul over a $10,049 processing bill from Democratic Secretary of State Jocelyn Benson as it pursues planning records for a citizen redistricting commission that will draw new political boundaries in 2021.

But Benson's office has called the requests overly broad and is accusing Michigan Republican Party Chairwoman Laura Cox of attempting a "media stunt" to undermine confidence in the pending commission.

Cox on Thursday rejected an offer from Benson to provide public comment on proposed commission applications and guidance rules, citing “uncooperative, obstructionist policies" by a secretary of state who preaches transparency.

The Secretary of State's office estimated it would cost $45,904 to process an initial Freedom of Information Act request that sought “a vast amount of information” from the department, Chief Legal Director Michael Brady told the Michigan GOP in a June 7 letter.

The state used a "conservative" labor estimate to calculate a $10,049 fee for a "narrowed, but still very broad" second request, Brady said in a separate letter denying a Republican Party appeal.

The GOP opposed the 2018 ballot initiative that created the citizen redistricting commission — which Benson’s office is tasked with setting up — and has been attempting to obtain internal planning documents through public records requests.

“We believe this is a public process involving quite possibly the most constitutionally serious issue we face in Michigan in the 21st century, and we want to see how the process is being carried out by the Secretary of State’s office,” spokesman Tony Zammit said.

Previous public records requests by the party have usually cost less than $500, he said.

Republican lawmakers controlled the last redistricting process in 2011 and were sued over what a federal three-judge panel this year called a gerrymander of “historic proportions.” The U.S. Supreme Court killed the lawsuit in June, ruling such claims are “political questions beyond the reach of federal courts.”

In addition to redistricting commission documents, the party's requests both sought records related to a new committee Benson established to advise on the implementation of Proposal 3 election reforms, including same-day registration and no-reason absentee voting options.

Brady denied an initial appeal over the $45,904 estimate, saying the request was written in a way that could encompass “each and every communication between any member of the Secretary’s executive office, no matter the topic.” 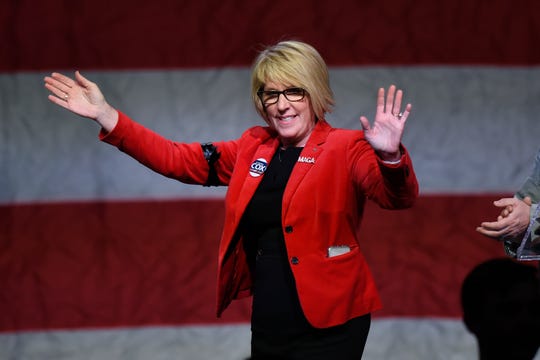 The first request could have included as many as 24,000 individual records that would require 533 hours of staff and attorney work to search for, review, redact and separate non-exempt records from public disclosure, Benson's office said.

The state told the GOP its second request would produce an estimated 5,173 records that would require 115 hours of processing at a total cost of $10,049. Labor estimates were based on using the “lowest paid” department employee capable of each task, the Secretary of State's office said.

As standard practice for large requests, the office asked for a 50% deposit — $5,024 — to begin the process.

Brady denied the second appeal, noting the request involved "all public records for six requests covering two committees and a search of any member of the Department for more than half of the requests."

The fee estimates comply with department procedures and guidelines, he said.

The new commission, which will draw legislative and congressional lines by the 2022 election cycle, must include four Democrats, four Republicans and five independents selected through a random process overseen by the secretary of state.

“The success of this new process will depend upon public engagement: whether average citizens know about the commission and are encouraged to apply and, once formed, whether citizens can meaningfully engage in creating and submitted maps to be considered,” Benson wrote.

Cox dismissed the invitation in a July 25 response letter to Benson, suggesting she is asking the GOP to comment “on a topic that you have refused to provide information on.”

“Your actions have shown a lack of transparency and ability to work with the Michigan Republican Party,” Cox wrote. “If you truly value our input and participation, you can start by providing these materials to us so we can participate in his process.”

Zammit suggests Benson should turn over the records without “any sort of legal redactions,” which could reduce the costs. “We think that the public has a right to know the direction that the Secretary of State’s office is taking on implementation of this," he said.

Benson was not required to solicit public comment but voluntarily posted the draft application form and guidance document online for review.

Spokesman Shawn Starkey said the Republican Party cancelled a meeting with the Secretary of State's office while it was developing those documents, "eliminating the opportunity to have important discussions."

Benson's office hopes the party will reschedule and is "grateful that many Republican legislators and their staff met with us, and we will continue to approach the commission in the nonpartisan manner the public deserves," Starkey said.

"But it appears Laura Cox is only interested in a media stunt, sending letters and submitting appeals for the sole purpose of blasting them to the media."

But charging the Republican Party more than $10,000 for a public records request is "unacceptable and inhibits the exact process of transparency and participation that you claim to support," Cox told Benson in her Thursday letter.

Benson's office has responded to more than 250 Freedom of Information Act requests since the Detroit Democrat took office on Jan. 1, Starkey said.

"We value transparency and the public’s right to know," he said.