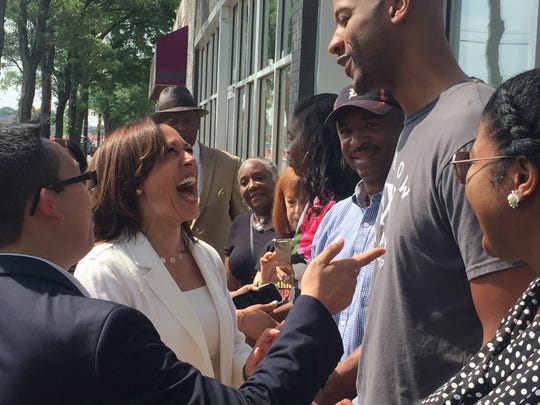 U.S. Sen. Kamala Harris, D-California, shares a moment Monday (July 29, 2019) with Jonathan Merritt, owner of the Narrow Way Cafe and Shop in Detroit. The Democratic presidential hopeful visited a cafe and bakery along Livernois Avenue in northwest Detroit ahead of her Wednesday presidential debate at the Fox Theatre. (Photo: Leonard N. Fleming / The Detroit News)

Detroit — U.S. Sen. Kamala Harris extolled Detroit's comeback Monday during a visit to two businesses on the Avenue of Fashion, responding to Detroiters who are concerned about President Donald Trump's tweets and how she "intends to win Michigan."

Two days before her debate with nine other Democratic presidential hopefuls, Harris toured a coffee shop and a bakery on Detroit's northwest side, ordering drinks and cakes, taking pictures with patrons and asking them about their lives and concerns.

Over the weekend, Trump sparked a new controversy by referring to Maryland Democratic U.S. Rep. Elijah Cummings’ majority-black Baltimore district as a “disgusting, rat and rodent infested mess” where “no human being would want to live.” The president said the tweets were not racist and reflected the House Oversight committee chairman's lackluster record.

"It's just a further example of the fact that the guy plays low-ball," Harris said about Trump's latest tweets. "He is trying to divide this country. That is not reflective of a leader and certainly not an American leader."

Harris said one of the Detroit patrons raised the issue of the president's tweets, which critics have called racist.

"It is bothering people," she said, noting the patron wanted to know how America was going to health from it."

"I've been here before, and Detroit is an iconic American city with an extraordinary history of people and families who helped build the American economy," said Harris, California's junior senator.

She then declared, "I intend to win Michigan. I believe that the people of Michigan rightly expect that anyone who wants to earn their support will be thinking about the issues that wake them up at 3 in the morning."

Those issues include improved health care and not political rhetoric, she said.

In the Miami debate in June, Harris accused former Vice President Joe Biden of opposing forced busing to achieve racial integration. She noted she was part of the second class of Berkeley, California, students to be voluntarily bused to a majority-white elementary school, saying "That little girl was me.”

Biden responded: "I did not oppose busing in America. What I opposed is busing ordered by the Department of Education; that's what I opposed."

Harris and Biden and poised to be on the same debate stage Wednesday at the Fox Theatre in Detroit, along with U.S. Sen. Cory Booker of New Jersey, who has also criticized Biden.

After Biden told a Detroit fundraiser crowd last week that he may not be so polite in the next debate, Harris retorted Monday: "My mother raised me to be polite, and I intend to be polite. I will express differences and articulate them and certainly point out where we have differences of opinion because I believe that Democrats and the American voter have a right to know that."

Trump has been touting his accomplishments in recent weeks, but the senator took issue with them.

"During the course of his presidency, he has done almost nothing to support working families in America," Harris said. "And I think the families in Michigan know that, and I plan being here, spending time here and earning their support."

Joshua Speyers, 37, of Detroit, spoke to Harris and "was amazed by her willingness to kind of engage with somebody just sitting in the coffee shop."

Speyers, who brought up Trump's tweets to Harris, said he remains undecided in the Democratic presidential race but liked Harris' congenial approach.

"I thought it was very cool that she wanted to listen to what we were trying to ask and she seemed very personable," he said.

Afia Phillips, 44, was also part of that conversation and praised the senator for "having an interest in others. You don't see that kind of humanity, I believe, in the current president."

April Anderson, the co-owner of Good Cakes and Bakes on Livernois where Harris visited, said she is still undecided but felt comfortable listening to Harris' approach to leading the country as president.

"It's great to hear her speak about the way the president is trying to divide the country and her means to try to bring the country back together," Anderson said. "It's one country, it's one people."

Anderson said she does have concerns about Harris' record as a San Francisco prosecutor and attorney general of California and what her stance on criminal justice reform would be because "I hire a lot of re-entry citizens" who have spent time in prison.

Critics have noted that Harris had a tough-on-crime stance that was mixed with reforms such as racial bias training for police officers.

But on Monday she picked up the endorsement of the Michigan Democratic Party's Black Caucus saying.

Harris has "plans to close the racial wealth gap, invest in our classrooms and higher education is a clear investment in our future but also America’s future and her continued economic growth," Caucus Chair Keith Williams said in a statement.

Meanwhile, Harris praised the business owners she met like Anderson and called them "leaders" in their communities and connecting with them helps her understand the American landscape better.

"Small business owners are very special people," she said. "It's about a passion, it's about a craft, it's about a skill. It's about community. And they really are the backbone from my perspective of what makes and will make America's economy strong."