Trump, both as a candidate and as president, has assiduously targeted Rust Belt states with attention and policies 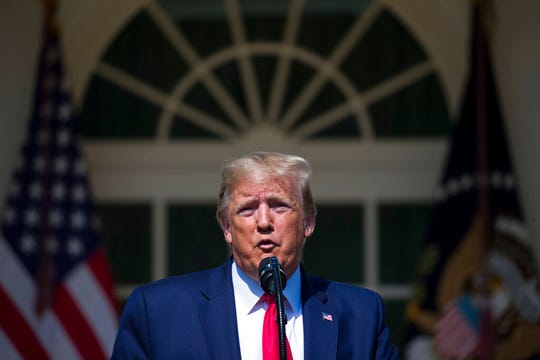 In this July 29, 2019, photo, President Donald Trump speaks in the Rose Garden of the White House in Washington. Trump campaigned in 2016 on revamping trade deals to revive America’s industrial base – a strategy that helped him pick off the historically Democratic states of Michigan, Pennsylvania and Wisconsin that Hillary Clinton took for granted. (Photo: Alex Brandon, AP, File)

Donald Trump, both as a candidate and as president, has assiduously targeted Rust Belt states with attention and policies – including tariffs – that he can point to as evidence that he made good on his promise to bolster American manufacturing, especially the steel industry.

That’s put Democrats running to replace him at risk of falling behind the president in states like Pennsylvania, Michigan, Wisconsin and Ohio that will prove crucial to deciding who wins the White House. And so far, they’re not doing a lot to catch up.

“Our steel industry was going out of business,” Trump said in mid-July during a White House event to promote domestically produced goods. “If I hadn’t been elected, you would have no steel industry now. It would be gone.”

Trump campaigned in 2016 on revamping trade deals to revive America’s industrial base – a strategy that helped him pick off the historically Democratic states of Michigan, Pennsylvania and Wisconsin that Hillary Clinton took for granted. Democrats carried those three states in every election from 1992 to 2012 and they will need them to win in 2020.

If anything, Trump’s hand has been strengthened. The manufacturing sector added 264,000 jobs in 2018, the biggest annual gain in two decades. And the steel industry, buoyed by Trump’s 25% tariffs that curbed imports, has added workers while making plans to invest billions in new mills and upgrading old ones.

No debates on manufacturing

The early Democratic debates have been dominated by discussions on broader national issues like health care, immigration and civil rights. The Democrats will get another chance to address their vision for manufacturing and the economy starting Tuesday in the next round of debates. They will take place in Detroit, home of the U.S. automakers and a lot of union households, a location that could provide a backdrop for attacking the Trump narrative.

Vonie Long, 52, a third-generation steel worker and president of the United Steelworkers local in Coatesville, Pennsylvania, said the ArcelorMittal mill he’s been working in for nearly a quarter century saw orders rise after last year’s steel tariffs, which led to about a 10% bump in new hires.

While he voted for Bernie Sanders in 2016 – and doesn’t plan to vote for Trump in 2020 – he acknowledges that the president has a stronger case to make with his more than 1,200 members.

“We expected our elected officials to fight for us, and for a while it didn’t seem like anyone was taking on that fight,” Long said. “The president did. Someone heard our concerns, and he’s taking action. Morale has increased.”

So far, the leading Democratic contenders have barely talked about trade policy or how they would handle the president’s tariffs on steel, aluminum and goods from China. Their reticence may be linked to the party’s legacy of favoring protectionist policies, while Republicans, until Trump, had established themselves as free-traders.

Joe Biden, the former vice president and front-runner for the 2020 nomination, mentioned steel only once on his campaign website and that was in a section about climate change. He kicked off his campaign in Pittsburgh, once America’s steel-making capital, with a pitch to Rust Belt voters who helped Donald Trump squeeze out victories in several key states. But he’s yet to send a clear message to win over that voting bloc and combat what looks like a stronger message from Trump’s side.

Biden “obviously doesn’t know that Pennsylvania is having one of the best economic years in its history, with lowest unemployment EVER, a now thriving Steel Industry (that was dead) & great future!,” Trump wrote.

The same disconnect is evident for manufacturing and tariffs. The nearly two dozen Democratic candidates overwhelmingly agree that Trump’s “trade-by-tweet” approach has failed, but for the most part, haven’t offered many detailed policy prescriptions of their own while campaigning in early primary and caucus states.

In a July trip to Iowa, where farmers have bit hit hard by retaliatory tariffs, California Senator Kamala Harris vowed to hold China accountable for stealing trade secrets and intellectual property from the U.S. while it “dumps substandard products in our economy.”

Massachusetts Senator Elizabeth Warren’s “Green Manufacturing Plan for America” suggested that as president, she’d invest $2 trillion and intervene in markets to support manufacturing and jobs, including manipulating the dollar to promote exports. Warren released a trade policy plan on Monday that would set up steps parties to any trade agreement would have to complete, including ensuring workers’ rights.

“The 20-some people seeking the nomination, they are in this identity politics fight right now,” said Long, who was turned off to Trump years ago when his dad convinced him the future president was anti-worker. “Later in the cycle, they might shift to things that matter to a steelworker.”

Some high-profile factories, like General Motors Co.’s plant in Lordstown, Ohio, have closed, the trade deficit has ballooned and promised infrastructure hasn’t materialized, said Scott Paul, president of the Alliance for American Manufacturing, a non-partisan partnership between steel companies and the United Steelworkers. “I would not be surprised that they lean right in with Youngstown, and some of these other layoffs, to go after the administration.”

In a hypothetical general election match-up, Biden is the only Democratic candidate leading against Trump, according to a July 25 Quinnipiac University poll, while other top-tier candidates are tied with the president. While a Washington Post-ABC News poll published this month showed Trump’s job approval at 44%, his best score was on his stewardship of the economy, with 51% saying he was doing a good job.

In Ohio, a perennial swing state that was carried twice by Barack Obama and then won by Trump, there may be room for Democrats to make inroads. Last week, they gathered in Youngstown at a Democratic National Committee event, where Trump promised in a speech two years ago to bring back factory jobs, a vow they believe he broke.

The DNC hosted similar events in seven battleground states last week, including Wisconsin, Michigan and Pennsylvania, to make a case against Trump’s economy.

“There is some good data out there because of long-term economic growth, but you walk around these towns and the sights themselves tell a different story,” said Ohio Democratic Party Chairman David Pepper, who attended the event in Youngstown. Many towns in Ohio have not felt the benefit from Trump’s strong economy, he said.

While job growth in Ohio has accelerated under Trump, the state’s gains have lagged the U.S. Ohio employment has increased 1.6% over the past 30 months, according to the Bureau of Labor Statistics. That’s less than half of the 4% nationwide gain in jobs.

“One of the parts of our country that’s up for grabs are the midsize and smaller towns that are struggling,”’ Pepper said. “The best thing candidates can do right now is lay out their ideas of how to lift up these communities.”

Todd Leebow, chief executive officer of Cleveland-based distributor Majestic Steel, said the notion of aiding the steel industry is increasingly bipartisan. Still, he’s paying particularly close attention to the Democrats because a reversal of Trump’s actions, which have spurred investment, would hurt the sector, he said.

“If someone came in and just completely peeled back everything that was done by this administration when it comes to trade actions and tariffs, that is risky for the industry,” Leebow said. “The steel industry has gotten more exposure because of the tariffs and trade actions. This is not something that should end, regardless of who is the White House.”