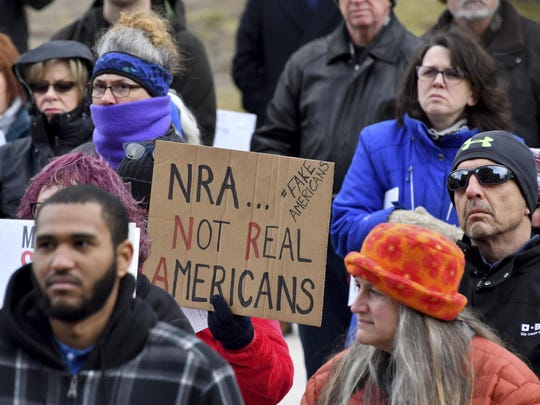 In February 2018, people at a rally in Lansing call for the passage of gun control legislation in Michigan. (Photo: Dale G. Young / The Detroit News)

Lansing — Michigan firearm laws rank near the middle of the pack compared with other states, and partisan divides here may make reforms difficult despite political urgency fueled by weekend mass shootings in Texas and Ohio.

But Democrats pushing for a so-called red flag law appear to have an unlikely ally: Republican President Donald Trump, who some liberals have accused of inciting violence through divisive rhetoric.

More than a dozen states have some form of red flag law. U.S. Sen. Lindsay Graham, R-S.C., is expected to introduce legislation that would create a federal grant program encouraging states to adopt such laws.

Democratic Gov. Gretchen Whitmer supports red flag legislation, and former GOP Gov. Rick Snyder considered the idea last year. A Michigan proposal would allow family or law enforcement to request from a judge an “extreme risk protection order” that would ban a person determined to pose a significant risk of injury to others or themselves from buying or owning a firearm for a certain amount of time.

"The gun lobby has sold the American people a false narrative that you have to pick one of two sides when it comes to gun laws," Whitmer tweeted Monday. "The reality is that we can both recognize the rights guaranteed to us by the 2nd amendment AND work to prevent gun violence."

But Republicans who control both chambers of the Michigan Legislature have so far shown no appetite to take up existing legislation.

“Maybe there are some things around the edges for them to consider, but I don’t think you’ll get any major changes that would limit people’s ability” to buy or carry firearms, Shields said.

Red flag legislation, including bills Democrats introduced in Lansing, would violate an individual's right to due process and treat a symptom while ignoring the underlying issue of the country's mental health crisis, said Rep. Beau LaFave, R-Iron Mountain.

"Doesn't matter if you're a Republican or a Democrat, if you're a nut job, no law is going to stop you," LaFave said. "The only thing we can do is address the mental health crisis."

Michigan GOP leaders have taken notice of the fatal shootings in Dayton and El Paso. House Speaker Lee Chatfield of Levering on Sunday called for unity and denounced white supremacy, but he stopped short of urging more stringent firearm laws in Michigan.

“Americans have always had access to guns, but mass shootings are on the rise,” Chatfield said on social media. “We all need to admit America has a racism problem. It’s disgusting. It's wrong. White supremacy is evil. I don't know the solution, but let’s unite as Americans and learn to love & respect each other."

The sentiment was applauded by Attorney General Dana Nessel, a Plymouth Democrat who noted the two “certainly disagree on gun policy” and earlier had called on the state Legislature to develop “better gun laws I can enforce to protect our state residents from senseless acts of gun violence.”

It is unclear what action, if any, Michigan's Republican-led Legislature will take after the mass shootings. Few, if any, lawmakers are working in Lansing this week as a summer recess continues.

"I expect the recent shootings to be a topic of conversation once the caucus reconvenes late this month," said Amber McCann, a spokeswoman for Senate Republicans and Majority Leader Mike Shirkey of Clarklake.

Republicans fully controlled Lansing the past eight years and pushed to relax gun rules, but Michigan is generally considered a moderate state by both gun control and gun rights groups.

Guns & Ammo ranked Michigan the 26th best state for gun owners in 2018, noting GOP lawmakers failed to finalize 2017 legislation that would have allowed owners to carry a concealed pistol without a permit or mandatory training.

Chatfield backed the 2017 measure, which cleared the Republican-led House but stalled in the Senate amid fears of a veto by Snyder, who had rejected similar legislation in 2015.

Snyder blocked several bills pushed by the gun lobby and last year suggested the state “seriously look” at the kind of red flag gun law that Florida and other states adopted following a deadly shooting at Marjory Stoneman Douglas High School in Parkland.

Most states have been moving “steadily in a pro-gun direction,” Guns & Ammo said in its latest rankings, crediting Michigan for a 2015 law streamlining the permit application process and for its “strong use-of-force statutes,” including a stand-your-ground law that then Democratic  Gov. Jennifer Granholm has said she regrets signing in 2006.

The Giffords Law Center to Prevent Gun Violence gave Michigan a “C” grade in its most recent state report card, suggesting lawmakers here “can and must do more to keep residents safe from this deadly public safety crisis.”

The nonprofit legal group, led by shooting victim and Democratic former U.S. Rep. Gabby Giffords of Arizona, ranked Michigan 16th in the nation for the strength of its gun control laws and 37th for gun deaths. Guns are used to kill more than 1,100 Michigan residents each year, and nearly 60% of those are suicides, the group said.

The Giffords Law Center credited Michigan for requiring the reporting of handgun purchases to law enforcement but said the state could improve its rankings by enacting tougher child access prevention rules, extreme risk prevention laws and a ban on military-style weapons.

Whitmer on Monday urged the Legislature to take up red flag legislation and send it to her desk for signature.

"No single law can prevent every instance of gun violence, but this is a commonsense step," the governor said in a social media statement. "We can't wait idly by for an act of gun violence to devastate our state to demand action, we must act now."

As a candidate last year, Whitmer backed red flag rules, universal criminal background checks and a ban on so-called bump stocks that are used to increase the rate of fire on semi-automatic weapons. The Trump administration officially banned bump stocks under a December rule that took effect in late March.

The National Rifle Association endorsed Republican Bill Schuette over Whitmer, who the group said “wants to criminalize the private transfer of firearms” and “would not support the rights of law-abiding Michiganders.”

Whitmer said Sunday she was “heartsick” over the shootings and called gun violence a “public health crisis.”

“We need to come together and take action to make sure firearms don’t end up in the hands of someone who wants to hurt themselves or others,” she wrote.

Sen. Curtis Hertel Jr., D-East Lansing, said he is frustrated Republicans have not yet allowed hearings on bills to create a red flag law or ban a gun show loophole that allows some private rifle sales without a permit.

“I’m tired of hearing that it’s the video game industry’s fault or it’s a mental health issue,” Hertel said. “There must be something we can do to prevent these tragedies from happening."

State House Republicans in recent months have pushed to free up some restrictions on gun possession in Michigan. One measure gained bipartisan support.

In May, the House approved in a 90-19 bipartisan vote a bill that would charge people with a civil fine instead of a felony for carrying a concealed pistol with a license that had expired within a year. In a closer 67-42 vote on the same day, the House approved a proposal to allow someone to transport a loaded shotgun in a vehicle on private land.

Both bills have yet to receive committee consideration in the Senate.

Separate legislation from Rep. Gary Eisen, R-St. Clair Township, would reduce the penalty for carrying a licensed concealed pistol in a “no-carry” zone from a felony to a civil infraction with a fine of up to $100.

LaFave, who has been instrumental in several of those bills, was attending  the Delta County open carry picnic with a fellow legislator at almost the same time the shooting was happening Saturday in El Paso.

The shooting was a tragedy, LaFave said, but measures to further limit gun ownership in the state while ignoring mental health shortfalls might would only remove a weapon of defense from those using it legally.

"All of these gun control laws are going to make it harder for these Delta County gun owners to protect other law-abiding citizens," he said.

A Huntington Woods Democrat introduced red flag legislation in February that would allow family or law enforcement to request an “extreme risk protection order” in circuit court for someone who “poses a significant risk of personal injury to himself or herself or others" by possessing a firearm.

“If someone is a threat to themselves or others then there’s some kind of resource or mechanism that a family member or law enforcement member can use,” said Rep. Robert Wittenberg, chairman of the state Legislative Gun Violence Prevention Caucus who has introduced similar versions of the bill before.

Based on testimony, documents, electronic data or history, a judge could grant an order that would ban the person from purchasing or possessing a firearm or using or applying for a concealed pistol license for one year, according to the bill.

Wittenberg's "red flag" legislation has never received a hearing in the GOP-led Legislature, despite general support last year from Snyder.

“We’re hoping to actually get something on the books this year,” Wittenberg said. “We are not anti-Second Amendment. We just want to make sure people are qualified to own weapons.”

The legislation includes certain protections for individual served with an extreme risk protection order, including the right to a hearing on the order within 14 days and penalties for making a false statement while requesting a protection order.

The protection provisions seek to prevent restraining order requests for frivolous reasons or that amount to harassment, Wittenberg said.

Senate Democrats introduced similar legislation but the bills have not seen action since Shirkey referred them to his own Government Operations Committee.

“It is entirely in his hands,” sponsoring Sen. Rosemary Bayer, D-Beverly Hills, said of the GOP leader.

“There may be some hope for us here in the near term,” Bayer said. “I will take help from anyone to get this done. This should not be a partisan issue. This is about protecting our kids, period.”

There's work to be done on the red flag legislation if it's ever to be seriously considered, said Rep. Hank Vaupel, R-Fowlerville.

The chairman for the House's health policy committee, Vaupel said the Legislature is committed to identifying and addressing the mental health crisis they see as the root of the problem. But the landscape is complex and it is difficult to address all of the areas needing improvement at once, he said.

"We have to identify early," Vaupel said. "We have to be able to get treatment to people earlier.”