Trump has long been skeptical of the need to keep a U.S. military presence in Afghanistan, where U.S. troops have been fighting since 2001

Berkeley Heights, N.J. – Secretary of State Mike Pompeo and other members of the national security team briefed President Donald Trump on Friday on the state of peace negotiations in Afghanistan, with Pompeo saying afterward that “led by the president, we are working diligently on the path forward.”

Trump, who is spending most of the week at his golf club in New Jersey, has long been skeptical of the need to keep a U.S. military presence in Afghanistan, where U.S. troops have been fighting since 2001. The war has taken more than 2,400 American lives. 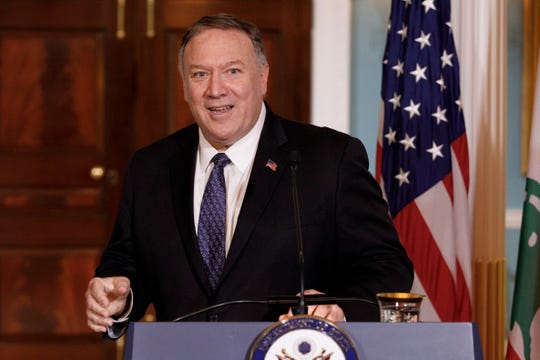 Even though Secretary of State Mike Pompeo has declared a Senate run to be "off the table" next year, many fellow Republicans in Washington and his home state of Kansas aren't buying it. (Photo: Carolyn Kaster, AP)

White House spokesman Hogan Gidley said other participants in the meeting included Vice President Mike Pence and Secretary of Defense Mark Esper. Also present were national security adviser John Bolton, Gen. Joe Dunford, chairman of the Joint Chiefs of Staff, and Zalmay Khalilzad, the envoy who has led the U.S. side in talks with the Taliban. Gidley said the meeting “went very well, and negotiations are proceeding.”

Trump has complained that U.S. forces in Afghanistan serve as “policemen.” That description irks Republican Sen. Lindsey Graham of South Carolina, who urged the president to listen to his national security team.

“American service members are not acting as policemen in Afghanistan,” Graham said. “They are the front-line defense for America against the reemergence of radical Islamist groups who wish to attack the American homeland.”

Pompeo released a statement after the meeting that touched on Graham’s concern.

“In continued close cooperation with the government of Afghanistan, we remain committed to achieving a comprehensive peace agreement, including a reduction in violence and a ceasefire, ensuring that Afghan soil is never again used to threaten the United States or her allies, and bringing Afghans together to work towards peace,” Pompeo said.

The U.S. and the Taliban appear to be closing in on an agreement under which U.S. forces would withdraw in exchange for guarantees that Afghanistan would not become a haven for other terrorist groups.

The U.S. has about 14,000 troops in Afghanistan. They mainly advise and assist Afghan forces and conduct counterterrorism operations against the Islamic State group’s Afghan affiliate and other extremist groups, including al-Qaida.

The Taliban have kept up a near-daily rate of deadly attacks, despite holding several rounds of talks with Khalilzad since his appointment almost a year ago. The Taliban now control roughly half of Afghanistan and are at their strongest since 2001, when the U.S.-led invasion toppled their government after it harbored al-Qaida leader Osama bin Laden.