No millennial bump for Buttigieg, but hints of broad appeal

His lack of any ample base of support, even among his fellow millennials, is a central challenge of the 37-year-old’s long shot bid

No millennial bump for Buttigieg, but hints of broad appeal

Des Moines, Iowa – Pete Buttigieg would like to turn the fight for the 2020 Democratic presidential nomination into a contest about generational change. But there’s one looming problem: He has yet to win over his own.

His lack of any ample base of support, even among his fellow millennials, is a central challenge of the 37-year-old’s long shot bid to rise from mayor of South Bend, Indiana, to the nation’s highest office. He plays well across a broad spectrum of Democratic voters, but in small fragments that have left him an intriguing candidate stuck in single digits in national polls. 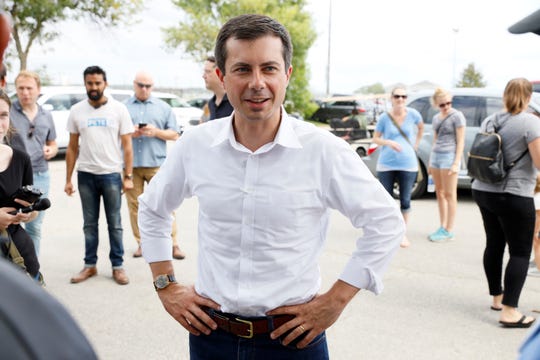 “You can put groups of candidates into corners. What corner do you put Pete Buttigieg in?” said J. Ann Selzer, longtime director of the Iowa Poll, produced by The Des Moines Register and its partners. “I think that the combination of characteristics that most define Buttigieg fit him rather uniquely. He appears to be a cluster of one.”

As such, he needs to try to leverage that kind of appeal into votes against a field where candidates with clearer ideological positions, such as Sens. Elizabeth Warren of Massachusetts and Bernie Sanders of Vermont, have more natural core constituencies.

There was hope for Buttigeig in a Register poll in June that showed his overall viability footprint – measuring Iowans listing him as their first or second choice, or merely considering him – closely trailed the survey’s top choices: former Vice President Joe Biden, Sanders and Warren.

Biden does better among older voters; Sanders and Warren do better among younger ones. There is no consistent deviation among age groups for Buttigieg, Selzer said.

During Thursday’s presidential debate in Houston, Buttigieg tried to make a virtue of his youth while playing the adult in the room when his rivals bickered on stage.

“This is why presidential debates are becoming unwatchable,” he said after Biden landed a verbal jab during a tense back-and-forth with Julian Castro, housing secretary under President Barack Obama. “This reminds everybody of what they cannot stand about Washington, scoring points against each other, poking at each other.”

So far, there is no indication that Buttigieg’s next-generation appeal has liftoff. His early summer national buzz, largely the product of his raising a stunning $25 million in the second quarter, gave him plausibility. He enters the autumn stretch to the February caucuses with as robust an Iowa campaign as almost any of his top tier rivals, with more than 100 staff, plans for 20 offices and an aggressive outreach system. 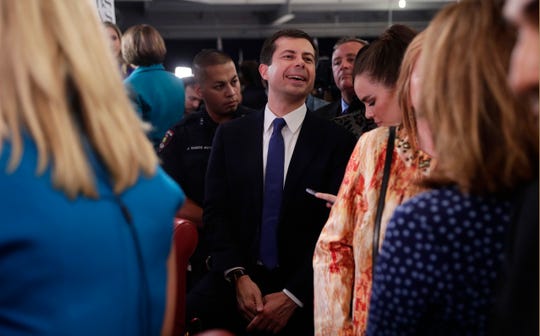 South Bend Mayor Pete Buttigieg, center, works his way through the media in the spin room following the Democratic presidential primary debate hosted by ABC on the campus of Texas Southern University in Houston on Sept. 12, 2019. (Photo: Eric Gay, AP)

He does so with his sights squarely fixed on capturing that enduring ideal for Democratic primary voters, a next-generation prophet looking deep into the future, like virtually every winning Democratic nominee going back 60 years.

“If you look at the history of successful Democratic nominees, they tend to be younger, they tend to be from outside,” David Axelrod, a former senior adviser to President Barack Obama said, referring to Obama and Presidents Bill Clinton and Jimmy Carter. “The question is whether the overhang of Donald Trump creates a different environment where people are risk-averse and reaching for comfort and stability.”

Buttigieg’s debate moment recalled his increasingly pointed criticism of the Washington establishment during his summer blitz through Iowa.

At a town hall-style event in August, he told a 13-year-old girl who was troubled by school shootings that it is “a failure of the generation that’s in charge.”

It’s “one of the reasons I’m not waiting my turn,” the candidate said, drawing applause from the generationally mixed group.

Buttigieg came of age in the mass shooting era and serving in the country’s first post-9/11 war, but there’s no conclusive evidence that he is resonating more with younger voters.

At the same time, Buttigieg doesn’t register the variances in support from different age groups that the older candidates do. A July poll by the Pew Research Center found that just 7% of Democratic primary voters nationally under the age of 30 supported Biden, compared with 41% of voters 65 and older. Sanders, on the other hand, drew 24% of his support from the younger group and just 4% from the older segment.

Advisers say that Buttigieg’s balanced draw from all age groups in the Pew poll echoes their internal findings in early-voting states, and it manifests in Selzer’s most recent poll. It reflects his attractiveness to that enduring bloc of the Democratic presidential electorate that has sought a break from the past.

Still, that polling collectively has yet to show support that would propel him into the upper tier of the 2020 pack.

That’s not to say young adults with children and college students weren’t drawn to the sense of urgency Buttigieg brought to talk of climate change or gun violence out during his summer swing in Iowa, or older voters to his policy understanding and mild temperament.

“It’s not just that he’s younger. It’s his intellect and his vision at a time when the world is looking to new leadership,” Elizabeth Sauer, a retired high school teacher, said at an event with Buttigieg in Cedar Rapids this month. She was referring to younger Western world leaders such as Canadian Prime Minister Justin Trudeau and French President Emmanuel Macron.

Buttigieg, in an interview Sunday on ABC’s “This Week,” said he thinks the perspective he brings “needs to be at the table right now at a time when around the world we’re seeing more and more elected leaders from France to New Zealand to El Salvador coming from my generation.”

There’s been little reliable public polling in Iowa since Buttigieg broke through in July with his $25 million fundraising for the second Quarter. But evidence suggests opportunity for Buttigieg, who had risen to fourth behind the three older candidates in the Register’s June poll. 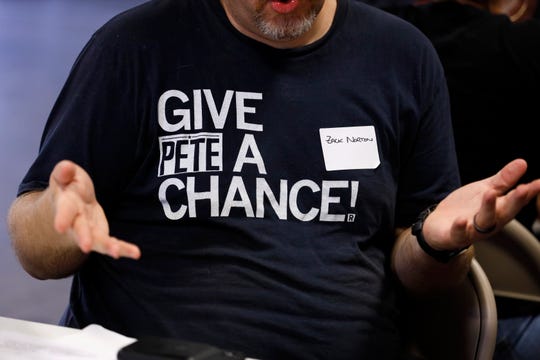 Since that poll, Buttigieg reported the prodigious level of contributions, sent 100 staffers across Iowa, began spending $350 million on digital advertising – some aimed at younger voters on the music app Spotify – and undertook an intricate peer-to-peer contact program in Iowa and New Hampshire.

Given his support across age groups, the personal outreach could yield the advantage of adding first-time caucus participants to the mix, which has proved pivotal in past competitive caucuses.

Obama won the 2008 caucuses, having trailed better known candidates Hillary Clinton and John Edwards throughout the months leading up, by attracting a heavy influx of first time participants.

“A candidate who attracts niches needs to attract a number of them–like the Obama coalition,” Selzer said. “It was not sufficient to draw large portions of younger voters, or minority voters, or women for that matter. He had to have them all for it to turn into a win.”