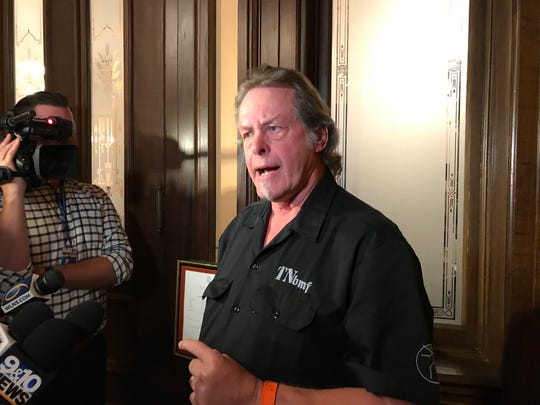 Rocker Ted Nugent supports a House bill in Michigan that would overturn a ban and would allow hunters to lure deer and elk with bait during hunting seasons. (Photo: Beth LeBlanc/The Detroit News)

"If they think they can stop deer from swapping spit, they're idiots," Nugent said during a House Government Operations Committee meeting.

Nugent, whom GOP lawmakers referred to as "Uncle Ted," testified in support of a bill that would legalize deer and elk baiting during hunting seasons. The bill introduced by Rep. Michele Hoitenga, R-Manton, would reverse a 2018 ban that was put in place to address concerns that chronic wasting disease was spread through bait piles. It’s not clear the science used to push that ban is reliable, Hoitenga said.

A longtime hunter, Ted Nugent is questioning the science behind Michigan's deer baiting ban and supporting a bill that would overturn the 2018 ban. The Detroit News

Deer are eating from the same trees and plants anyway and the current ban is hurting the hunting industry in Michigan, said Nugent, a 71-year-old Detroit native. He has family in Michigan, hunts here and remains active in state politics.

"Russ Mason, chief of the DNR, admitted if you hunt deer over bait and feed you are not a conservationist," Nugent said. "... Russ Mason just doesn’t like hunters who hunt over feed and bait.”

Mason's comments, made during an interview with Michigan Out of Doors, were a personal opinion, DNR spokesman Ed Golder said.

"The department believes that anybody who cares about the long-term health of fish, wildlife and our natural resources is a conservationist," Golder said.

The DNR opposes the bill and believes the authority to ban baiting should remain with the Natural Resources Commission, he said.

"In addition, peer-reviewed research has shown that baiting and feeding that concentrates animals beyond their normal movement patterns increases the likelihood of disease transmission," Golder said.

Nugent also criticized state-sanctioned culling efforts, in which the state hires sharpshooters to cull deer herds in areas where overpopulation is causing issues.

“Don’t you ever take our money and hire people to shoot our deer," Nugent said. "...Should I hire someone to play a guitar for me?”

The hunting industry in Michigan is believed to generate about $8.9 billion in annual economic impact, Hoitenga said in a statement Tuesday. Hunting and fishing licensing fees last year contributed roughly $83.5 million to the DNR's budget, about 20 percent of the department's budget.

The baiting ban cuts in to the state's hunting economy, "with little evidence that it will do anything to prevent the spread of disease," Hoitenga said. “It makes no sense to ban hunters from scattering apples near their tree stands when every day in nature deer graze on the fruit that falls off of apple trees.”

Now living in Texas, Nugent has been active in Michigan politics in recent years, and has lent his endorsement to statewide GOP candidates such as 2018 gubernatorial candidate Bill Schuette and attorney general candidate Tom Leonard.