Washington — Federal regulators are proposing to extend by 20 years the time that water utilities have to replace lead service lines when drinking water exceeds the federal threshold — a move that critics said disregards lessons learned in Flint.

In a draft rule published Thursday, the U.S. Environmental Protection Agency also didn't move to lower the longstanding 15 parts per billion lead threshold, which public health advocates have charged to be too high and unsafe for human health. Any level of lead is considered unsafe, but the federal threshold ensures communities take action when it is exceeded. 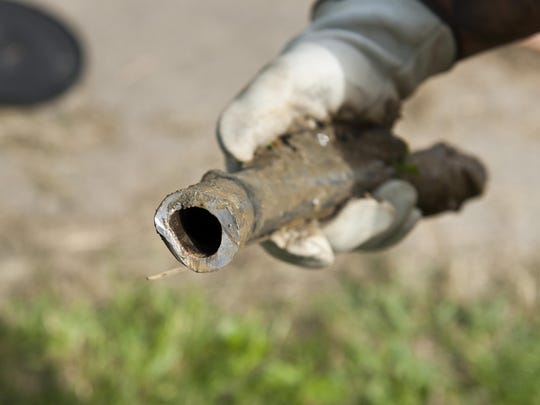 A section of lead pipe was removed by crews replacing lead service lines at homes in Flint in August. (Photo: David Guralnick / The Detroit News)

Other proposed changes would mandate that water systems notify customers within 24 hours when they find excessive lead levels, instead of within 30 days, and would bar utilities from using certain sampling practices to obscure test results, federal officials said.

But environmental advocates objected that the EPA would require water utilities to test only 20% of schools and daycare centers a year, leaving uncertain how often water faucets or fountains within those facilities must be tested.

They also slammed the EPA's decision not to reduce the 15 ppb action level, which EPA officials defended Thursday on a call with reporters.

“The agency is maintaining the existing action level because that is still an appropriate level that is based on the feasibility of what water systems can achieve,” an EPA official said on the call.

Former Republican Gov. Rick Snyder created new lead rules in Michigan in response to the Flint crisis, lowering the state action level for lead from 15 ppb to 12 by 2025. Snyder called the federal lead and copper rule "dumb and dangerous."

The agency does plan to introduce a new 10 ppb “trigger level” that requires utilities to examine corrosion-control measures and consult with state officials about whether to replace lead service lines, but without enforceable deadlines for taking action, experts said.

“We’re establishing a trigger level at 10 parts per billion because we think that’s an appropriate value at which to trigger actions by water systems to both prepare for potential exceedance of the action level, and to take steps to reduce lead exposure at that level," the EPA official said.

"We think it’s an appropriate value, and we’re soliciting public input on that and the actions we propose to have systems take.”

Under the current rule, water systems with lead contamination over 15 ppb must replace lead service lines at a rate of at least 7% per year, giving utilities 15 years to fully replace the lines.

The EPA's new rule would only require replacement of 3% of service lines per year, extending the timeline for replacement to 33 years. Lead was used in plumbing materials until its use was outlawed in 1986.

“A water utility does not need more than three decades to replace its lead service lines," said Dimple Chaudhary, senior attorney with the National Resources Defense Council and lead counsel in a lawsuit over Flint's drinking water. "NRDC’s work in Flint shows that.”

She highlighted the $100 million settlement that the NRDC and its partners reached in 2017 in the wake of the Flint crisis that required the city and state to replace all of Flint’s lead service lines within three years.

“Lead service lines must come out of the ground quickly after lead levels are elevated,” Chaudhary said.

“There is no viable alternative to protect people’s lives in the long term. Communities cannot and should not live off bottled water. Water filters are hard to install and maintain, and chemical treatment can take years to become fully effective and is also not fool-proof.”

EPA officials said the new provisions will work in a "concerted form" that would actually result in more lead service lines getting replaced more quickly.

Laborers Jon Filpatrick, front, and Justin Glazier of Fessler and Bowman open a hole in the street as crews replace lead service lines at homes on the 1200 block of Durand in Flint on Wednesday. (Photo: David Guralnick / The Detroit News)

Systems with levels above 10 ppb but below 15 would have to set an annual goal for conducting replacements and do outreach to encourage resident participation in lead line replacement programs, EPA said.

Erik Olson, senior strategic director for health and food at the Natural Resources Defense Council, called the change a “major rollback of the lead service line replacement requirements that actually will swallow up the modest improvements that are found elsewhere in the rule.”

He suggested that extending the time that utilities have to replace lead service lines to 33 years would likely constitute "backsliding" in regulations that is explicitly prohibited by a provision of the federal Safe Drinking Water Act.

He and others also raised concerns about whether the EPA would take steps to enforce its new “watered-down” rule, as Chaudhary called it.

U.S. Rep. Dan Kildee, D-Flint Township, panned the rule as "a step backwards and a slap in the face to the children in Flint."

“We know there is no safe level of lead in water and we need to remove all lead service lines in our communities to protect families and children," Kildee said.

"Yet, President Trump’s dangerous rule allows lead lines to remain in communities, even after high levels of lead have been found in drinking water.

"The Flint water crisis should have taught policymakers at all levels of government that we must get serious about removing lead from our water systems. Yet the President’s policies have continuously put special corporate interests ahead of public health," Kildee added.

The federal Lead and Copper Rule has not had a major overhaul since 1991. The most recent revisions were due in 2013 but had been delayed for years.

Several advocates did praise the mandate for water systems to notify customers of excessive lead levels within 24 hours.

Olsen agreed that sampling improvements would help, but said the EPA had previously advised against using these sampling "tricks" in February 2016 guidance document in the wake of the Flint water crisis.

EPA officials also said they were mandating an inventory of lead service lines, though this was also required by the 1991 version of the Lead and Copper Rule, and “a lot of utilities did not do it," Olson said.

Also, in 2018, Congress required all states do an evaluation of the number of lead service lines in their state to qualify for federal funding under the Drinking Water State Revolving Fund that supports water infrastructure.

In Michigan, new rules are requiring local communities to replace all lead lines connecting water mains to houses and other buildings by Jan. 1, 2041 in addition to lower the lead threshold to 12 ppb.

Local governments sued, claiming the rule to further restrict the amount of lead allowed in drinking water was an illegal unfunded mandate from the state.

But state Court of Claims Judge Christopher Murray rejected the last legal challenge, saying certain financial protections under the Headlee Amendment aren’t triggered in this case because local governments have chosen to provide water. He said Wednesday there’s no mandate that they’re required to provide the service.