Eric Trump and his brother, Donald Trump Jr., run the Trump Organization, which conducts business around the globe and is still owned by the president

“Can you imagine if I took 3 cents from the Ukraine or 4 cents from China?” President Donald Trump’s second-oldest son asked in a recent Fox Business appearance.

Eric Trump and his older brother, Donald Trump Jr., run the Trump Organization, which conducts business – and takes in tens of millions of dollars annually – around the globe and is still owned by the president. The company is forging ahead with projects in Ireland, India, Indonesia and Uruguay, and is licensing the Trump name in such turbulent areas as Turkey and the Philippines. 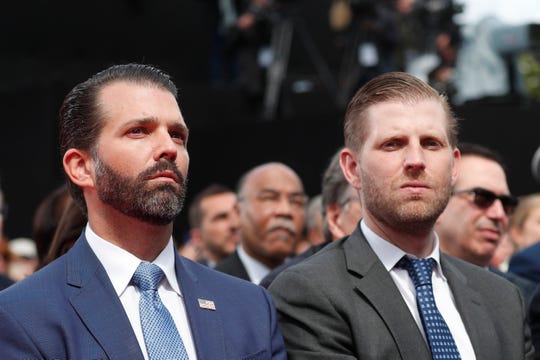 Their sister Ivanka is a senior adviser to the president. She kept her international fashion business going for 18 months after she was given a loosely defined White House portfolio that includes interacting with heads of state and working with domestic and international corporate chiefs on economic programs.

On the same day Trump and his daughter dined with Chinese President Xi Jinping at Mar-a-Lago in Florida in April 2017, China awarded her three preliminary trademark approvals for jewelry, handbags and spa services. In all, she has obtained more than a dozen Chinese trademarks since entering the White House, ensuring her access to the world’s second-largest economy if she goes back into business.

Time and again, Trump’s children have blurred the lines of family, nation and business – essentially the charge the president makes against the Bidens as he battles a House impeachment inquiry focused on whether he improperly pushed Ukraine to investigate his political rivals for what he claims were shady dealings.

Trump’s children “appear to people all over the world to be his bagmen,” said Richard Painter, who served as White House ethics czar under President George W. Bush. “This is the Trump business empire. It’s owned by Donald Trump, the president, and they are managing it for him and collecting business on his behalf.”

While Hunter Biden’s overseas deals may have embarrassed his father, now a Democratic presidential candidate, no evidence has emerged to suggest wrongdoing by the former vice president.

“There’s no substantiated or credible allegation that I know of that Hunter Biden’s work was personally financially benefiting Joe Biden,” said Robert Maguire, research director for Citizens for Responsibility and Ethics in Washington, a nonprofit that is suing Trump and alleges he is illegally profiting from the presidency.

The White House declined to comment for this story and the Trump Organization did not respond to a request for comment. But family members have angrily denied profiting from Trump’s time in the Oval Office.

During an August business trip to Indonesia, Trump Jr. dismissed reporters’ questions about potential conflicts of interest as “totally asinine.”

Eric Trump said Thursday at the Yahoo Finance All Markets Summit in New York that his family would go “down as one of the few families that have actually made a tremendous sacrifice.”

“We’ve lost a lot of money based on the fact that we don’t do any deals, that we’re sitting silent” while his father is in office, he said.

Since the company is privately held, that’s impossible to prove. In the meantime, both brothers sometimes travel on Air Force One – Eric was aboard Thursday when the president flew to a rally in Minneapolis – and in June, both brothers dined at Buckingham Palace in London during Trump’s state visit. Both also spoke at Trump’s reelection kickoff rally in June in Orlando, Fla., and Trump Jr. is a leading surrogate at campaign events.

After he was elected, Trump pledged not to seek new foreign business deals while president.

He never divested from the Trump Organization, however, which had licensed his name for real estate developments around the globe.

Trump owns more than $130 million in assets across 30 countries under the trust controlled by his children, according to an analysis of his financial disclosures by the Center for Responsive Politics, a nonprofit, nonpartisan group in Washington that tracks money in politics.

The assets generated more than $100 million in income in 2017 and 2018 combined, according to the group, which calls those estimates conservative because the president has only disclosed ranges, not specific figures, in public.

While some Trump properties have “taken a nosedive” since he became president, according to Anna Massoglia, a researcher for the center, others – such as his hotel in Washington – have benefited from foreign interests that moved events to his properties after Trump took office.

Trump’s children have also looked to expand their overseas holdings, she said.

“In many cases, they’ve gone back and, to some extent, reactivated or given new life to long-dormant projects,” Massoglia said, citing projects in the Dominican Republic, Indonesia and Uruguay that are in various phases of development.

“Trump’s travels or his family’s travels across the world have appeared exploratory” toward “the possibility of new business and setting themselves up to expand following the presidency,” she added.

The Trump Organization, as part of a stated commitment to return foreign profits to the U.S. Treasury, said it sent $191,538 to the government last year. But the company has not explained how it calculated that figure.

Since Trump refuses to release his tax returns and the company keeps much of its financial data confidential, it’s unclear whether he is following the ethics rules he set for himself after the election. Even if he is, some of the largest gaps in the self-imposed guidelines involve foreign projects.

The projects can benefit from local zoning or infrastructure improvements, or even when U.S. military crews are billeted there. The House Oversight Committee is investigating why the Pentagon has spent nearly $200,000 at Trump Turnberry golf resort in Scotland since 2017 for overnight stays and other expenses during refueling stops in nearby Glasgow.

The Trumps also can market existing projects under the guidelines, and actively sell luxury condos to foreign buyers, among other investments.

Last month, Trump Jr. hosted about 100 people in New York who had purchased homes in Trump-branded luxury towers near New Delhi. Visitors flew over Manhattan in helicopters, dined at Trump’s hotel and listened to a “fireside chat” between Trump Jr. and an Indian business partner.

Trump Jr. repeatedly told Indian reporters of his desire to do more business in India and other countries once his father leaves office.

“I’d love to be in the market right now,” he told CNBC-TV18, a major channel for business news in India. “But there is a bigger picture and there’s an important picture for us, for our country, for what my father is doing, and for Americans. There will be time to be back in that later on, and I’m sure those relationships will remain.”

Trump Jr. told Mint, an Indian business publication, that India would be “a market that we would be very interested (in), post-politics” and that “it would be easier for me to get going in India because of the relationships we have built up in the last decade.”

Those relationships predated Trump’s presidency – the company laid the groundwork for the developments years before he won in 2016 – but they have been strengthened from the White House.

Last month, President Trump lavished praise on Indian Prime Minister Narendra Modi and held an unusual joint rally with him in Houston, gushing about the size of the crowds that packed the stadium.

“My personal chemistry (with Modi) is as good as it can get,” the president said two days later while discussing trade with the Indian leader on the sidelines of the U.N. General Assembly meetings in New York.

In 2017, the Trumps marketed another project in India – this one in Mumbai – with a picture of President Trump, calling it “an opportunity worth its weight in gold” to be associated with “celebrity & POTUS Donald Trump’s Trump Organisation,” using the abbreviation for president of the United States and the British spelling for organization.

After the Wall Street Journal raised questions about the materials, the Trump Organization said they were sent by an outside firm without its authorization.

When they took over the Trump organization, Trump Jr. and Eric Trump agreed to stay away from their father’s official duties, in part to signal foreign governments or corporate leaders that they could not curry favor with the White House by doing business with the president’s sons.

But that line seems murky at best.

In January, Eric Trump boasted of his father’s local political connections while reviewing construction of a Trump-branded property in Uruguay.

Speaking to an Argentine website, he cited his father’s “deep respect” for Argentine President Mauricio Macri – Trump did business with Macri’s father in the 1980s – and discussed where he would like to invest when Trump leaves office.

“Now we have other major international brands, which are being introduced in the market, and that is very good for the region,” he said. “Without a doubt, we have raised the standards. Our goal is to have the standards of New York.”