Two Democratic presidential hopefuls bashed General Motors Co. during a debate in Ohio over the automaker's strike with the United Auto Workers union

Two Democratic presidential candidates criticized General Motors Co. during Tuesday's night debate in Ohio over the automaker's month-long strike with the United Auto Workers union that have left plants idle as workers have walked off the job.

"I’ve met with these members of the UAW who are striking outside of facilities in Cincinnati, in Lordstown, Ohio, which has just been decimated by GM and their maleficence, paying effectively zero in taxes last year," said former U.S. Rep. Beto O'Rourke, D-Texas.

Former U.S. Rep. Beto O'Rourke of Texas gives a thumbs up during a break at the first of two Democratic presidential primary debates in Detroit in July. (Photo: Paul Sancya, AP)

"The people of Ohio (are) investing tens of millions of dollars in the infrastructure around there. What they want is a shot. And they want fairness in how we treat workers in this country, and they’re not getting it."

The strike is in Day 30. GM has lost $1.2 billion and the number of affected workers has grown to about 175,000 as the work stoppage creates repercussions up the supply chain, according to estimates by the Anderson Economic Group in East Lansing.

GM has a deal to sell the recently idled Ohio plant to Lordstown Motors Corp., an affiliate of electric-truck startup Workhouse Group Inc. In talks with the UAW, the Detroit automakers has proposed building a new battery-cell manufacturing facility in northeast Ohio's Mahoning Valley, site of the Lordstown Assembly Plant.

O'Rourke proposed changing the trade deal with Mexico by allowing Mexican workers to join unions, "which they are effectively unable to do today. Not only is that bad for the Mexican worker, but it puts the American worker at a disadvantage."

"As union membership has gone down, we’ve seen a stratification of wealth and income in this country. So the other thing I’ll do as president of the United States is begin to fight again to see union strength in this country spread," said Booker, who indicated he stands with the strikers.

"To make sure we have sectorial bargaining, so that unions from the auto workers all the way to fast food workers can ensure that we improve worker’s conditions and make sure that every American has a living wage in this country."

Earlier in the debate, U.S. Sen. Elizabeth Warren of Massachusetts touted her plan to require corporations to have rank-and-file employees serve as 40% of their corporate boards that she called "accountable capitalism." It would blunt the move toward  automation that has been blamed for job losses in the auto industry and other manufacturing sectors, she said.

Among the Democratic candidates who have visited striking UAW workers in Michigan are U.S. Sens. Bernie Sanders of Vermont, Amy Klobuchar of Minnesota and Warren. Former Vice President Joe Biden has visited strikers in Wisconsin, while South Bend Mayor Pete Buttigieg has done so in Nevada.

The criticism came as two sources familiar with the GM-UAW talks said a proposed tentative agreement could be reached soon. GM CEO Mary Barra and President Mark Reuss joined the negotiating table on Tuesday, and a national UAW council meeting of union leaders has been called for Thursday.

Among the issues are "in-progression employees," who must work eight years before they reach the top of the automaker's pay scale. The union the timeline shortened.

GM is seeking to limit increases to labor costs, which are $13 per hour per employee higher than foreign automakers manufacturing in the United States, according to the Center for Automotive Research in Ann Arbor. 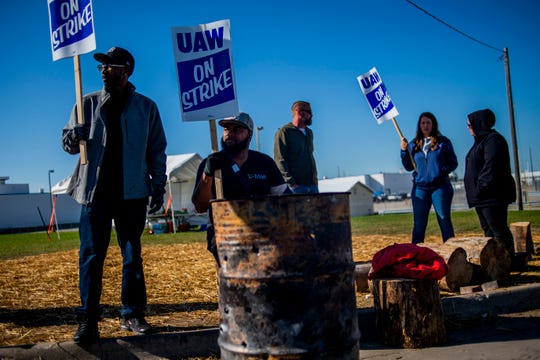 Detroit resident Jay Hawkins, left, and Flint resident Damien Moore picket outside of General Motors' Flint Paint Facility during the nationwide UAW strike against General Motors on Monday, Oct. 7, 2019, in Flint, Mich. Hawkins has 12 years in at the Flint Assembly Plant, while Moore has 11 months in as a temporary worker. (Jake May/The Flint Journal via AP) (Photo: Jake May, AP)

There are 49,000 UAW members striking and are now earning $275 in weekly strike pay after the union boosted the amount from $250 over the weekend.

After the UAW went on strike on Sept. 15, GM revealed that it had offered to create 5,400 jobs and invest $7 billion in eight facilities, including for a new electric truck at the Detroit-Hamtramck Assembly Plant.

In addition, a new battery-cell manufacturing facility would be built in northeast Ohio's Mahoning Valley, site of the recently idled Lordstown Assembly Plant. GM has a deal to sell the Ohio plant to Lordstown Motors Corp., an affiliate of electric-truck startup Workhorse Group Inc.