GOP leaders and Gov. Whitmer appear no nearer to reaching consensus on a supplemental plan that would restore priority funding in the state budget

Correction: Governor Gretchen Whitmer vetoed 147 items from the budget. A previous version of the story had the wrong number.

"The governor wants more money and wants an attempt to fix the budget without getting any real assurance that the money will go where the Legislature intends and we can’t do that right now," Chatfield said several hours after a meeting with Whitmer and Senate Majority Leader Mike Shirkey, R-Clarklake.

The Levering Republican was referring to the governor's power to get the State Administrative Board to shift money within a department, something Whitmer did Oct. 1 to the tune of $625 million in transfers. The administrative board is filled with Whitmer appointees and Democratic allies Attorney General Dana Nessel and Secretary of State Jocelyn Benson.

The Tuesday meeting, the leaders' third since Whitmer vetoed nearly $1 billion in spending in the state budget, ended with little resolution on how much funding would be restored.

Instead, Shirkey and Chatfield emerged from the half-hour meeting with a renewed focus on common policy goals moving forward. 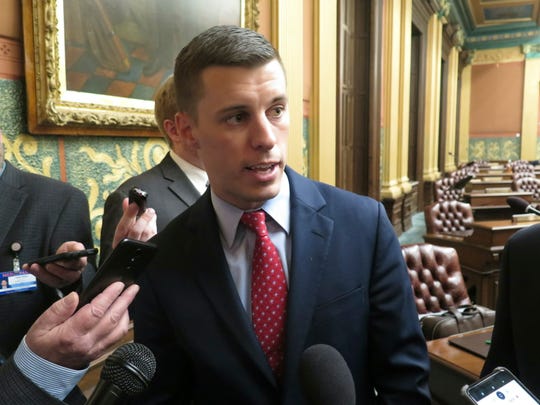 Michigan House Speaker Lee Chatfield, R-Levering, speaks with reporters following the House's approval of a bill that would cut auto insurance premiums on Thursday, May 9, 2019, in the Capitol in Lansing, Mich. Democratic Gov. Gretchen Whitmer threatened to veto the legislation if it gets to her desk without changes. (Photo: David Eggert, AP)

The focus on policy instead of state finances indicates a continued stalemate on restoring funding for items excluded by the Legislature in its adopted budget or vetoed by the governor earlier this month. Some cuts are scheduled to take effect as early as next week.

Among the assurances legislators may be seeking are a guarantee that Whitmer won't redistribute money appropriated by the Legislature to other priorities through a State Administrative Board transfer.

Legislators have voiced concern over Whitmer's use of the little-used technique to transfer $625 million within departments earlier this month. The technique hadn't been used since Republican former Gov. John Engler was in office in the early 1990s.

"It's difficult to convince caucus members to send more money to an executive with no assurances that it will go to the intended programs," said Amber McCann, a spokeswoman for Shirkey.

Whitmer's office on Tuesday reaffirmed the legality of the governor's actions via the State Administrative Board and her role in the budgeting process.

“The Legislature does not give money to the governor," said Tiffany Brown, a spokeswoman for Whitmer. "It appropriates funds for worthy causes such as public health, public safety and public education. For the past 100 years, the State Administrative Board has been an important check and balance in state government, and its authority has been affirmed by the Supreme Court and the Attorney General.”

Both Shirkey and Chatfield said the budget is done and highlighted instead policy issues that are gaining bipartisan support in both chambers, such as expungement reform and Raise the Age legislation, which would allow 17-year-old defendants to be adjudicated in juvenile court.

“I’m very proud that we’ve reached a consensus on them, and I think that’s being overshadowed because of the governor’s vetoes,” Chatfield said.

When asked whether they felt pressure to restore some funding by a given date to avoid shortfalls in several state-supported programs, the speaker reiterated the Republican leaders’ stance.

“We felt pressed for time to get the budget done by Sept. 30; we did,” Chatfield said. "The budget’s over and we need to talk about policy wins and areas in which we can reach an agreement.”

Last week's meeting between the governor and legislative leaders seemed to have been better received by all involved. Legislators claimed to have had a “productive conversation” with the governor.

No new meeting among the leaders was scheduled Tuesday, but "the governor will continue to hold time on her schedule each day if the speaker and Senate majority leader want to negotiate a supplemental," Brown said.

Some programs vetoed earlier this month will feel the effects within two weeks, while others may already have missed some state reimbursements, according to the State Budget Office.

More than $129 million in vetoed rate increases at rural hospitals would have been processed and paid as claims were made for services rendered after Oct. 1, according to the budget office.

Isolated school districts, which had $7 million in funding vetoed, and charter schools, which had $35 million in per-pupil increases vetoed, would miss their first of 11 monthly installments on Oct. 20.

Roughly $38 million in vetoed tuition grants for Michigan students attending independent colleges is likely to be felt the first week of November, when the state is scheduled to make its first quarterly payment.

Nearly $15 million in county jail reimbursements is scheduled to be paid in monthly installments, with the first payment made in mid-November.

Media buys for the Pure Michigan advertising campaign, a $37.5 million program, won't run out until the end of the calendar year, according to the budget office.

Other programs don't have a scheduled payment until December, such as the secondary road patrol program, other rural hospital payments, the Going Pro skilled trades and jobs program, and the payments the state makes to communities in which they own tax-free land.

Hertel’s bill also would restore funding for the vetoed Autism Navigator and secondary road patrols in rural areas. Funding for literacy coaches would be increased as would a program providing tuition help to people returning to community college for skilled trades education.

The Republicans are seeking $257 million in supplemental spending proposals.