The aggressiveness highlights Biden’s strategy of framing Trump as fundamentally unfit for the presidency while casting himself as the most stable, experienced alternative among Democrats

The aggressiveness highlights Biden’s strategy of framing Trump as fundamentally unfit for the presidency while casting himself as the most stable, experienced alternative among Democrats. It comes as Trump persists in taking swipes at Biden and as Warren continues a monthslong rise in primary polls.

Biden pounced on Warren’s suggestion in Tuesday night’s debate that the U.S. should not have troops in the Middle East. 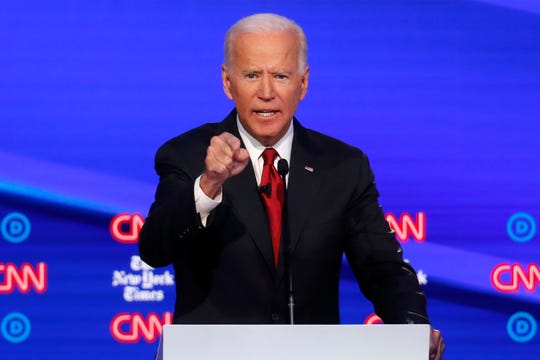 “I have never heard anyone say, with any serious background in foreign policy, that we pull all troops out of the Middle East,” Biden said Wednesday outside a union hall in Columbus, Ohio. “If she meant pulling our fleet out of the eastern Mediterranean or the Persian Gulf, I think it would be an absolute disaster for American security and American foreign policy.”

Warren didn’t offer that level of detail Tuesday when she said, “I don’t think we should have troops in the Middle East.” But her statement garnered immediate attention on social media and forced her campaign aides to clarify that she meant only combat troops.

The Massachusetts senator has previously advocated for shrinking the U.S. footprint overseas and has said she wants to withdraw troops from Afghanistan, Iraq and Syria. Withdrawing troops from the entire region would go further and end generations of U.S. presence in the volatile region.

Biden, who has tried to capitalize on his foreign policy experience as a two-term vice president and as a six-term senator, promises to stop “endless wars” in the region, but with qualifications. In a sweeping foreign policy address in July, Biden advocated for removing most combat troops from Afghanistan in favor of “narrowly focusing our mission” in the region, but he was careful to say that military force would always be an option in his White House. He planned a “major” foreign policy speech in Iowa later Wednesday.

“It’s fascinating that a person who has a plan for everything has no plan for the single most consequential issue in this election in the minds of the American people across the board,” Biden said, adding that “credibility matters.”

Warren took several minutes of heat Tuesday night over the issue, sticking to her argument that a “Medicare for All” system would drive down costs for middle-class households by eliminating their current expenses for private insurance premiums and other out-of-pocket costs. Her suggestion is that those savings would outweigh any tax increases, an analysis Biden said would not apply for every middle-class wage earner.

The senator “is going to have to tell the truth,” Biden said, or face questions about her willingness “to be candid and honest with the American people.”

“Look, I’m not picking on Elizabeth Warren, but this is ridiculous,” he said.

Turning to Trump, Biden continued his counterpunching by accusing the president of running “the most corrupt government in the history of the United States of America.”

Trump has spent weeks accusing Biden and his son Hunter of corruption because of the younger Biden’s business activities in Ukraine when his father was vice president. Trump’s maneuver to pressure Ukrainian officials to investigate his accusations is now the center of a House impeachment inquiry. There is no evidence of wrongdoing by either Biden.

Biden called on Trump to release his tax returns, a move that potentially would shed more light on Trump’s financial dealings.

“Mr. President, even Richard Nixon released his tax returns,” Biden said, referring to the 37th president, who resigned from office to avoid being impeached and removed. “Release your tax returns or shut up.”