Mick Mulvaney said the delay in releasing aid to Ukraine was tied to Trump’s demands to investigate the 2016 election, not Joe Biden and his son

Gordon Sondland, the U.S. ambassador to the European Union, is giving closed-door testimony before House committees Thursday. A whistle-blower’s complaint said Sondland advised Ukrainian leaders on how to handle President Donald Trump’s demand for an investigation of a political rival.

Here are the latest developments:

Acting White House Chief of Staff Mick Mulvaney said the delay in releasing U.S. aid money to Ukraine was tied to the Trump administration’s demands to investigate matters related to the 2016 election, not former vice president Joe Biden and his son, Hunter.

“The money held up had absolutely nothing to do with Biden,” Mulvaney said Thursday during a briefing at the White House. Mulvaney said he was involved in the process of holding up the aid.

House Speaker Nancy Pelosi said Thursday that she has “no idea” whether the House impeachment inquiry and a Senate trial could be wrapped up by the end of the year.

She was asked about reports that Senate Majority Leader Mitch McConnell told his GOP colleagues he expected the entire matter to be settled before Congress leaves Washington for its holiday break.

“The timeline will depend on the truth,” Pelosi told reporters at the Capitol. She also said she had no concern about the impeachment process moving into the election year. 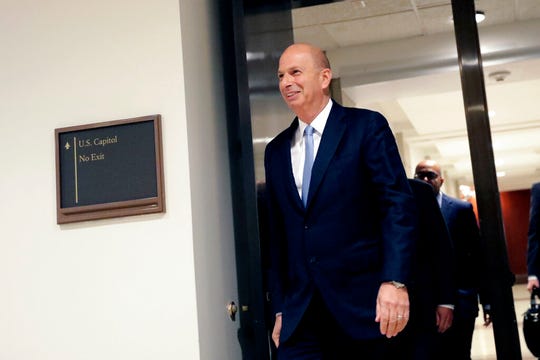 US Ambassador to the European Union Gordon Sondland, arrives for a joint interview with the House Committee on Foreign Affairs, House Permanent Select Committee on Intelligence, and House Committee on Oversight and Reform on Capitol Hill in Washington, Thursday, Oct. 17, 2019. (Photo: Pablo Martinez Monsivais, AP)

Sondland said Trump told him to deal with Rudy Giuliani on Ukraine and that he realized later that the president’s personal lawyer had an agenda to get Ukrainian help with the 2020 re-election campaign.

Sondland said he was “disappointed” when Trump directed him, Energy Secretary Rick Perry and then-special envoy Kurt Volker to work with Giuliani on Ukraine policy, according to his prepared remarks to the House panels leading the impeachment inquiry.

“Our view was that the men and women of the State Department, not the president’s personal lawyer, should take responsibility for all aspects of U.S. foreign policy towards Ukraine,” Sondland said in his statement.

Nonetheless, the three men concluded that it was a better course than abandoning their goal of setting up a White House meeting between Trump and Ukrainian President Volodymyr Zelenskiy.

“But I did not understand, until much later, that Mr. Giuliani’s agenda might have also included an effort to prompt the Ukrainians to investigate Vice President Biden or his son or to involve Ukrainians, directly or indirectly, in the president’s 2020 re-election campaign,” he said.

Sondland Distances Himself From Trump (9:38 a.m.)

Sondland plans to use his opening statement before House impeachment investigators to distance himself from Trump and the president’s actions regarding Ukraine, according to a copy of the statement obtained by Bloomberg News.

The ambassador to the European Union, also a generous Trump donor, said withholding aid for Ukraine in exchange for an investigation of a political rival would be “wrong,” and he downplayed his involvement any such deal.

“Inviting a foreign government to undertake investigations for the purpose of influencing an upcoming U.S. election would be wrong,” he said. “Withholding foreign aid in order to pressure a foreign government to take such steps would be wrong. I did not and would not ever participate in such undertakings.” He said he wasn’t aware until much later that Trump pressed Ukraine’s president in a July phone call to investigate the Bidens.

Sondland said he won’t use his testimony to “push an agenda,” but rather “to tell the truth.”

Sondland is also backing former Ukraine ambassador Marie Yovanovitch, calling her “a delight to work with.” Trump disparaged Yovanovitch in his phone call with Ukrainian president Volodymyr Zelenskiy and said she was “bad news.”