Biden: Trump has ‘no idea’ about working-class struggles

Joe Biden hammered Donald Trump’s treatment of the middle class as he campaigned Wednesday in his childhood hometown of Scranton, Pennsylvania

Biden: Trump has ‘no idea’ about working-class struggles

Scranton, Pa. – Joe Biden hammered President Donald Trump’s treatment of the middle class as he campaigned Wednesday in his childhood hometown of Scranton, Pennsylvania, hours ahead of the president making a separate visit to the critical battleground state.

A large American flag behind him and a friendly audience of old friends and extended family in front, Biden cast the putative billionaire president as a charlatan populist whose tax policies, economic stewardship and overall erratic leadership style has hurt U.S. workers.

“This administration has no idea what hard-working, decent, ordinary Americans are going through,” Biden said of the middle-class struggle in a growing but uneven economy. 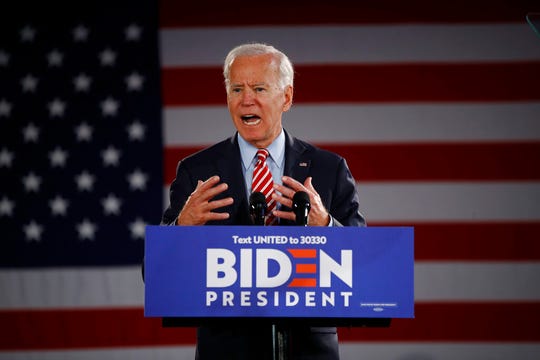 The 45-minute address continues a well-worn approach for Biden, whose strongest moments in a rollercoaster campaign of verbal missteps and inconsistent debate performances have come when the 76-year-old candidate takes the podium for a formal takedown of Trump.

Biden aides billed the latest endeavor as an economic policy address, and Biden certainly sought to tie together various policy proposals, from a repeal of Republican tax cuts and action on the climate crisis to stricter gun regulations and new spending on education, as a collective effort to “rebuild the middle class” that he calls the “backbone of America.”

Yet Biden’s return to northeast Pennsylvania was as much about symbolism and values, in stark juxtaposition to the president. Biden recalled his father’s “long walk” up the stairs of their Scranton home to tell 10-year-old “Joey” that the family had to move to Delaware because the elder Biden had lost his job.

“I think the longest walk his father ever made was to drop off $400 million in his trust account,” Biden said, referring to reports that Fred Trump steered hundreds of millions of dollars to his son as the future president built his real estate and promotions business. “It’s OK,” Biden said to laughter. “I’d like to have had that problem.”

Pennsylvania will again be the crux of Trump’s path to an Electoral College majority as one of the three Great Lakes states that he flipped from the Democratic column in 2016. Trump won the state by about 44,000 votes, less than 1 percentage point but still wider than his margins in Michigan and Wisconsin.

As he seeks the Democratic nomination, Biden has argued that he can reassemble President Barack Obama’s winning coalition by winning back some working-class whites who sided with Trump while reversing Democrats’ decline from 2012 among nonwhite voters in cities like Philadelphia, Detroit and Milwaukee.

Biden’s effort Wednesday to demonstrate those potential strengths, though, comes alongside fresh reminders of the peril found in a campaign built around Trump contrasts. Biden joined Democrats on Tuesday in blistering Trump for comparing the ongoing House impeachment inquiry to a “lynching,” only to have Trump’s campaign circulate video of the vice president using the same metaphor in 1998 when discussing impeachment proceedings against President Bill Clinton. Biden tweeted an apology Tuesday night for his choice of words.