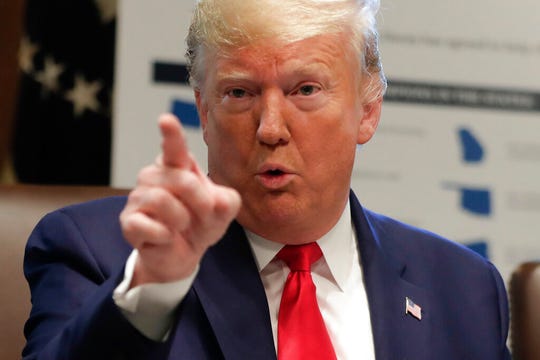 President Donald Trump speaks during a Cabinet meeting Monday, Oct. 21, 2019, in Washington. In his first trip to Chicago since his election, the president is scheduled to address the 2019 International Chiefs of Police Conference on Monday. (Photo: Pablo Martinez Monsivais, AP)

Washington – The Trump administration is restoring some trade privileges for Ukraine after the eastern European nation passed legislation to protect intellectual property rights.

The administration says legislation passed by Ukraine 2018 addresses the concerns, despite some shortcomings.

Trump’s efforts to pressure the government of Ukraine to commit to investigate his Democratic political opponents are the focus of a House-led impeachment inquiry into the president.

The administration’s Friday night announcement that some of Ukraine’s trade privileges will be restored follows a Washington Post report Thursday that the reinstatement had been delayed because Trump was withholding nearly $400 million in military and other assistance from Ukraine to secure an investigation.