Columbia, S.C. – Calling it the “most significant criminal justice reform in many generations” President Donald Trump revisited a signature bipartisan legislative achievement Friday at a South Carolina conference that will include weekend appearances from some of his Democratic presidential challengers.

Trump said faith leaders, law enforcement and others formed a historic coalition to get the bill passed. He signed it into law last December. 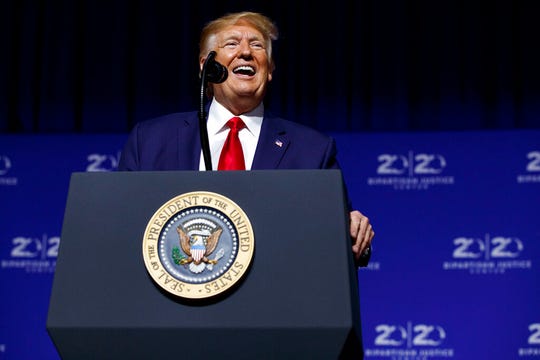 The speech gave Trump a chance to highlight administration efforts to reduce the federal prison population and boost rehabilitation efforts.

Ten Democratic presidential hopefuls will speak at the weekend forum in the key primary state. It’s a chance to connect with black voters who view sentencing laws for drugs and other nonviolent offenses as disproportionately harsh toward minorities.

Trump had the stage to himself Friday. The event’s organizer, the 20/20 Bipartisan Justice Center, was presenting Trump with an award for his work on criminal justice reform.

South Carolina will likely be in the Republican president’s win column in November 2020, but the state plays a critical role in determining who will serve as the Democratic Party’s presidential nominee.

Some state Democrats objected to the scant number of students who were at Friday’s event. The audience included mostly Trump supporters.

“Let’s not sugar coat it. The fact is, he is coming to this college today to create an appearance that people of color support his campaign,” said South Carolina Democratic Party Chairman Trav Robertson.

Passage of the First Step Act last year gave judges more discretion when sentencing some drug offenders and strengthened prisoner rehabilitation efforts. For those already in the federal prison system, it allowed those sentenced for crack cocaine offenses before August 2010 the opportunity to petition for a reduced penalty and upped the rewarded time off that prisoners received for good conduct.

The bill was supported by a unique mix of conservative and liberal groups. They argued that harsh sentences for drug crimes had filled the nation’s prisons with nonviolent offenders who languished for years and often decades without the kind of training and support they would need to sustain them once they re-entered society.

The Federal Bureau of Prisons reported to Congress last week that reduced sentences called for in the bill has led to the release of about 1,500 inmates so far, and that changes for good conduct time provided for the release of more than 3,000 inmates in July.

While that represents just a small percentage of the nation’s nearly 177,000 federal inmates, the legislation was not an easy sell. Social conservatives helped win over Trump on the issue. His son-in-law, Jared Kushner, worked with Republicans and Democrats to forge compromises that the president and some law enforcement groups could accept.