Washington – Treasury Secretary Steven Mnuchin said he had no knowledge that his longtime friend and billionaire Michael Milken would benefit from a tax break his agency approved last year for a property in Nevada.

Mnuchin’s role in awarding tax incentives for investing in low-income areas has come under scrutiny after The New York Times reported on Saturday that he intervened in a way that helped Milken. Mnuchin said he didn’t seek to specifically assist the former financier, and that the Treasury Department and Internal Revenue Service process to designate so-called opportunity zones was fair to all states that applied. 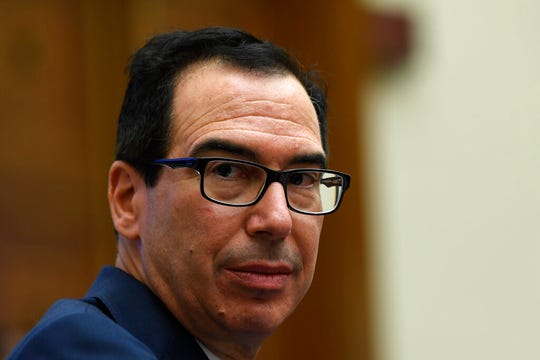 Treasury Secretary Steven Mnuchin testifies before the House Financial Services Committee hearing Tuesday, Oct. 22, 2019. About a month ago, Trump said to Mnuchin in front of a roomful of staff: You have such great ideas, why don’t you be my chief? (Photo: Susan Walsh, AP)

“I was very involved in this case, but I had no knowledge of Milken’s investments, nor did I speak to him about it,” Mnuchin said Tuesday in an interview in Tel Aviv, where he was meeting with Israeli officials. “Our role in this part of opportunity zones is really a technical one as it relates to the designations.”

The opportunity zone initiative was created as part of the 2017 Republican tax overhaul. The designation means investors can claim tax breaks for putting capital gains income into real-estate developments in distressed areas. New investments in opportunity zones can grow tax-free if investors hold them for at least a decade.

The program has been criticized as a windfall for wealthy investors, including people associated with President Donald Trump, and many opportunity zone projects financed so far are located in areas that aren’t poor.

Treasury and IRS career officials were concerned in mid-2018 when Mnuchin’s team reversed a ruling on guidelines for investments in opportunity zones, according to a person familiar with the matter.

The change meant that Nevada Gov. Brian Sandoval, who had spoken to Mnuchin, won an opportunity zone designation for a property that previously was disallowed because it was in an area where incomes were too high.

Career staff at the agencies found the shift unfair to states that had already completed their selection process with the Treasury Department, according to the person, who spoke on condition of anonymity. The officials weren’t aware of Milken’s involvement, or of the nature of Mnuchin’s intervention, and they didn’t think any laws were broken, the person said.

Sandoval asked the Treasury Department to give additional consideration for an area near Lake Tahoe to be designated as an opportunity zone. Milken has at least two investments in the area and a home nearby, according to the New York Times.

In a letter to Mnuchin in May 2018, the Nevada governor asked the secretary to use data from different years than required by IRS rules to calculate income levels in the area. That same month, Mnuchin told Sandoval that Treasury staff would review his revised nomination and that it would be approved if it met legal standards, a Treasury Department spokesman said Wednesday in an e-mailed reply to questions.

The following month, David Kautter, who was acting IRS Commissioner at the time, granted the opportunity zone designation.

“The attitude we took was that these were decisions of the governors,” Mnuchin said, adding that no special favors were given. “If there’s a capability to do this, we should designate it. We weren’t in the business of trying to judge whether this tract was better than that tract.”

Milken dismissed the Times story as false and said he played no role in recommendations to any government officials over changes in opportunity zone regulations.

“Mr. Mnuchin knows nothing about the details of my real-estate investments so he couldn’t act with the intent of helping me,” Milken said in an open letter published this week on the Milken Institute website. Mnuchin and Milken’s friendship dates back several years.

Kautter’s role in the designation process has drawn scrutiny from career IRS officials, who were concerned that Kautter was blurring the lines between promoting the Trump administration’s agenda and acting as a fair arbiter of the tax laws, according to another person familiar with the concerns.

At the time, Kautter was serving in two roles: as a Treasury Department tax policy political appointee and as acting IRS commissioner, which is supposed to be a non-partisan position. He used his IRS title on the letter to Sandoval granting the opportunity zone designation. The IRS declined to comment.

Several prominent investors, such as Goldman Sachs Group Inc., hedge fund EJF Capital and New York-focused RXR Realty, have already begun making investments in opportunity zones or are raising money to do so.

The New York Times report stirred angst among Democratic lawmakers, who already have described the GOP tax plan as a boon for the wealthy. The House Ways and Means Committee is holding a closed-door meeting in Washington on Wednesday about potential abuses of opportunity zones.

House Democrats are planning legislation to overhaul the program and restrict the tax break to the most distressed areas. Among the ideas under discussion is adding reporting requirements for investment funds to disclose to Treasury their assets and economic impact. Democrats are also considering reducing the number of zones or adding more incentives for investors to fund projects in the lowest-income areas.

“This is a case where the policy is clearly in the right church but not in the right pew,” Representative Dan Kildee, a Michigan Democrat, said.