The House Intelligence committee has been holding closed-door hearings related to President Donald Trump's July phone call with the newly elected president of Ukraine. Democratic critics have argued that testimony to the committee has shown Trump improperly sought an investigation of Democratic presidential hopeful Joe Biden and his son from the Ukrainian leader.

On Wednesday, the House released the impeachment inquiry bill, which allows for public House Intelligence hearings and set rules for the Republican ranking member to request testimony from anyone subject to the approval of Committee Chairman Adam Schiff, D-California. 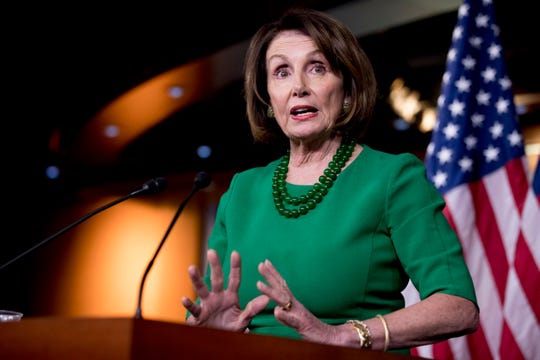 "While the resolution, H.Res 660, attempts to bring a veneer of transparency to the proceedings, it falls far short and instead continues to undermine the bedrock principle of due process,” the Michigan lawmakers wrote in the letter.

“As members of the Michigan delegation who do not sit on your self-determined impeachment inquiry committees — Permanent Select Committee on Intelligence, Oversight, or Foreign Affairs — we have been prevented vital access and material shared in the process. As a result, our constituents have been left in the dark.”

On Wednesday, Pelosi hailed the resolution as a fair way forward.

"The House will vote on Thursday to move forward on open hearings as we set out the process for the next phase of our inquiry," she said in a tweet. "Americans will get to hear about the President’s abuse of power firsthand. I gather Republican Leaders do not actually want that after all."

But the Michigan House Republicans argued in their letter that a month of secret hearings have violated tenets of transparency and bipartisanship that have guided past impeachment proceedings.

"... The only information available to us and the millions of Michiganders we represent have been selective and misleading leaks to the news media which may not paint a full, trustworthy picture," according to the letter.

The letter appears to signal that all six Michigan Republicans will vote against the resolution.

Michigan's seven U.S. House Democrats have publicly backed a potential impeachment inquiry as has U.S. Rep. Justin Amash of Cascade Township, a former Republican who turned independent in July after decrying hyper-partisanship by the GOP and Democrats.

Pelosi defended how House Democrats have handled their probes of Trump in a Thursday tweet.

"We’ve learned so much about Trump’s months-long campaign to pressure Ukraine because military veterans & his own national security aides stood up to tell the truth," she said. "They put their country ahead of everything else. It’s not too late for Republicans in Congress to do the same."