Bills that would legalize sports betting and internet gaming passed the state House Wednesday despite opposition from Gov. Gretchen Whitmer

Lansing — Bills that would legalize sports betting and internet gaming in Michigan passed the state House on Wednesday despite opposition from Gov. Gretchen Whitmer.

The votes came after lawmakers increased proposed tax rates to try to alleviate concerns that the new forms of gambling would decrease revenue collected through other forms of gambling, like the state's online lottery. 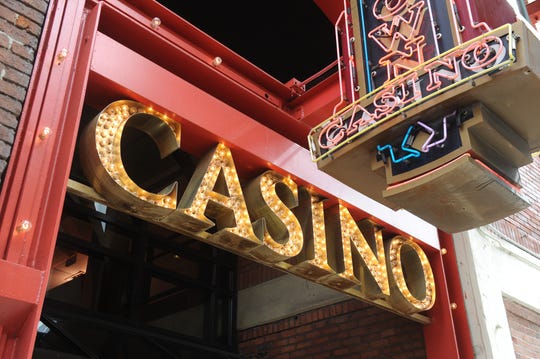 Penn National Gaming, the new operator of Greektown Casino, has entered into decades-long agreements with four internet gaming operators to bring sports gambling to its 41 locations in 19 states; two potentially could operate in Michigan. (Photo: Max Ortiz, The Detroit News)

“I am open to having further conversations about it," said Rep. Brandt Iden, R-Oshtemo Township, the lead sponsor of the bills. "I think we’ve come a long way. But I’m at the point that I won’t negotiate with myself any longer.”

A dozen Democrats, many from the city of Detroit, joined Republicans to pass the bills. But most Democrats voted against them.

The Whitmer administration remains willing to discuss the bills but worries they would hurt revenues for public education, Whitmer spokeswoman Tiffany Brown said earlier this week.

Rep. Rebekah Warren, D-Ann Arbor, echoed that sentiment during a speech on the House floor before the votes Wednesday.

"We still don't have the bills in a form that will survive our governor's veto pen," Warren said.

Under the revised bills, the proposed tax rate for sports betting would be 8.75% at the state's 23 tribal casinos and 12% at the three Detroit casinos, a figure that reflects the 3.25% tax imposed by the city, Iden said.

The proposed tax rates for internet gaming would be levied at a tiered or progressive rate ranging from 4% to 23% based on revenue, with higher earners assessed higher rates. The high mark would increase to 26.25% for Detroit casinos because of the 3.25% city tax.

In 2018, lawmakers passed another set of bills to legalize internet gaming. Former Gov. Rick Snyder vetoed those bills during his final days in office because he believed that internet gaming through the state's casinos could decrease state tax revenues by drawing dollars away from the state's online lottery program.

Only 12 of the 62 yes votes came from Democrats. Seven of the 12 are representatives from the City of Detroit, which is home to the state's three commercial casinos.

Iden projected that regulated internet gaming and sports betting would eventually generate between $80 million and $100 million in revenue a year.

“It’s going to be real dollars to the state of Michigan,” Iden said.

The bills now go to the Senate, where Iden hopes negotiations will continue.