Lawmakers, Whitmer have few days to restore aid before next cuts hit

If they can't reach a deal to restore nearly $1 billion in cuts this week, a resolution likely won't come till December

Lawmakers, Whitmer have few days to restore aid before next cuts hit

Lansing — If state lawmakers and Gov. Gretchen Whitmer can't reach a deal this week to restore nearly $1 billion in budget vetoes, more of the cuts will be felt throughout Michigan as a resolution likely wouldn't happen until December at the earliest.

Rural hospitals will have to cope with a financial squeeze, sheriff's departments will have to trim staff and some nonprofits fear they could lose employees simply because of the uncertainty, according to groups impacted by the vetoes and another $625 million in administrative transfers.

"It’s broke," said Blaine Koops, executive director of the Michigan Sheriffs' Association, about the budget situation in Lansing."I don’t know who broke it. I know who can fix it." 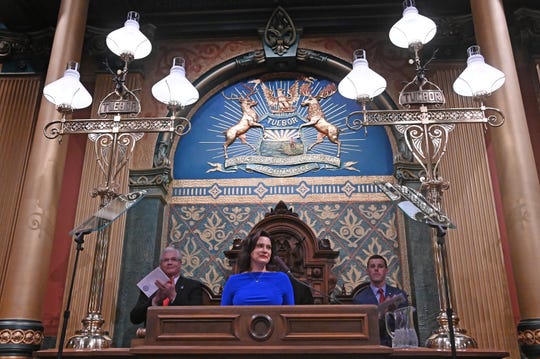 Complicating the situation are the calendars of the state House and Senate.

Because the upcoming November break coincides with deer hunting season, lawmakers often refer to it as the "hunting break."

"We’re not altering our schedule at all," Shirkey said.

"We have a budget in place," he added. "We’re going to continue operating just like we always have."

GOP lawmakers have said they want to see reforms to the State Administrative Board before negotiating supplemental spending bills. Whitmer used the administrative board to make $625 million in transfers within the Legislature's approved departmental budgets — which mostly benefited the governor's priorities while cutting aid for other groups or parts of department budgets.

Whitmer has indicated she is willing to meet any day with Republican leaders to negotiate a deal. She said she isn't willing to neuter executive powers to make funding transfers because she won't give away a power of future governors, whether they be Republican or Democratic.

The Republican-controlled Legislature approved a $59.9 billion spending plan for the fiscal year that began Oct. 1. Whitmer, the Democratic governor, said the budget didn't include enough funding for schools, communities and roads and sought to get Republicans to the negotiating table by vetoing 147 line item vetoes amounting to $947 million.

The vetoes left numerous initiatives and groups in limbo as state officeholders sought a path forward that would bring supplemental spending bills to restore funding that was vetoed or transferred.

Now, Republicans worry that if they provide additional funding, the governor will shift it elsewhere. On Monday, Lt. Gov. Garlin Gilchrist sent a letter to state lawmakers saying Whitmer is open to "a variety of public demonstrations" to show she wouldn't use the administrative board to shift funds provided in negotiated spending bills.

"The governor is willing and ready to negotiate a supplemental and future budget bills," Gilchrist wrote. "If an appropriations package is fully negotiated between the Legislature and the governor's administration, the governor will publicly acknowledge that she will not use the State Administrative Board transfer powers related to those funds."

Among the transferred money was $8 million for "multicultural integration funding" that went to nonprofit organizations providing public assistance services in their communities. The State Administrative Board transferred the funding to other initiatives within the Department of Health and Human Services, including shifting money to implement Medicaid work requirements scheduled to start Jan. 1.

One of the groups slated to lose money because of the transferred funding is the Sterling Heights-based Chaldean Community Foundation, which has used it to provide mental health services, behavioral health services and outreach programs.

The organization is still working to determine the specific impacts of the transfer, said Martin Manna, president of the  foundation. But it could mean a more than $1 million loss if the money isn't restored, he said.

The fiscal year started Oct. 1 and the foundation's board will meet in the next weeks to make decisions about what to do, Manna said. The number of people who go to the Chaldean Community Foundation for help would "overwhelm" the local office of the Department of Health and Human Services in Macomb County, he said.

"We are going to have to make some tough decisions sooner rather than later," Manna said.

Whitmer's vetoes struck $16.6 million in payments to rural hospitals and $7.9 million for rural hospitals to provide obstetrical care. Last year, hospitals that qualified for the payments received their funding in December 2018, said John Karasinski, a spokesman for the Michigan Health & Hospital Association.

The association can't speak to the business decisions that individual hospitals will have to make because of the funding losses, Karasinski said.

"However, the impact will be significant and will make it much more difficult to preserve and improve access and quality of care, especially for the communities served by small and rural hospitals," he added.

Some sheriff's departments have already made cuts because of a veto of $13 million for secondary road patrols, said Koops of the Michigan Sheriffs' Association. The money goes to a state grant program that funds county deputies to patrol county and local roads outside of cities or villages. It financed 119 deputies across the state.

“It is going to impact the safety of their communities,” Koops said.

Whitmer's vetoes also struck $1.02 million for the nonprofit Autism Alliance of Michigan to provide assistance to those with autism — a developmental disorder of varying severity.

The Autism Alliance is tapping into reserves and other resources to keep its efforts going, the organization's president and CEO, Colleen Allen, said. If the state funding isn't restored by January, the organization will have to make "significant changes" that will affect families, she said. The situation has also led to uncertainty for people working at the nonprofit, Allen added.

“I need them to do it yesterday,” she said about a hoped-for resolution to the stalemate.