Warren pushes back on critics of her health care plan

“My commitment to Medicare for All is all the way,” the Massachusetts Democrat told reporters

Warren pushes back on critics of her health care plan

Waverly, Iowa — Elizabeth Warren pushed back against critics of her newly-released plan to phase in implementation of a single-payer health care system, insisting Saturday that she is “fully committed” to Medicare for All and that she plans to first build on existing health care programs because “people need help right now.”

“My commitment to Medicare for All is all the way,” Warren told reporters, responding to critics who’ve questioned the timing behind the release of her implementation plan.

On Friday, the Massachusetts Democrat released a plan outlining how she would transition to a full Medicare for All program, first by using executive action to bring down drug and health care prices and by pushing Congress to pass a bill giving Americans the option to buy in to an expanded government-run Medicare plan. Warren says she’ll then work with Congress to pass pieces of a universal coverage proposal more gradually, with the whole thing being ready “no later than” her third year in office. 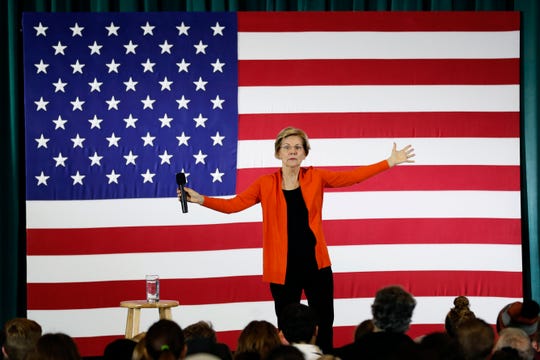 Several Democratic candidates, including Biden and Buttigieg, have proposed plans similar to the first phase of Warren’s health care plan, which would allow Americans to buy into a public option. Asked about the difference between her plan and Buttigieg’s, Warren said that “mine is about actually giving people Medicare for All that is going to be full health care coverage,” and outlined ways in which she says her public option would offer more expansive health care coverage than those proposed by Buttigieg or Biden.

Warren also brushed off critics, insisting that she released the plan now because “right now is when it’s ready” and that the details she’s proposed are clear.

But the latest rollout has underscored the political challenge she faces on Medicare for All, a policy some of her more centrist opponents have argued would hurt Democrats in the general election by turning off moderates and swing voters worried about too much government involvement in personal health care decisions. On Saturday, Warren characterized her plan as in fact allowing Americans to have “health care decisions that are just you and your doctor,” rather than having intermediaries like drug companies involved in the process.

Warren has however faced persistent questions about the implementation of her plan, first on cost and now on timing. This release comes two weeks after she unveiled a much-scrutinized plan to pay for Medicare for All, which proposed raising most of the additional $20.5 trillion her campaign says would be needed from taxes on businesses, wealthy people and investors — not the middle class. But some experts criticized that proposal for underestimating how much universal health care would really cost.

Now, her decision to delay passage of a full single-payer plan until well into her presidency has been criticized by some as an acknowledgement that some of what her opponents say is true: That Medicare for All will be too politically difficult to pass initially. The move could open her up to criticism from supporters of Vermont Sen. Bernie Sanders, who wrote the original Medicare for All bill and who argues on the stump for wholesale institutional change over incremental solutions,

Asked whether the move to break up implementation into two phases was an acknowledgement that passing a single-payer plan may be politically unfeasible, Warren told reporters, however, that “I don’t see it that way at all.”

She said she saw an “intense need … for relief, so my plan is first to do the things that as president I’ll be able to do on my own.”

Warren did seem to suggest, however, that the politics would get easier once Americans see what she's proposing about bringing people into the program gradually.