Mark Sandy is the only official willing to testify from the White House agency responsible for withholding U.S. military aid for Ukraine

The House impeachment inquiry is holding a rare Saturday session with the only official willing to testify from the White House agency responsible for withholding U.S. military aid for Ukraine, a decision that’s at the center of allegations against President Donald Trump.

Mark Sandy, responsible for national security at the Office of Management and Budget, faced questions about why the Trump administration withheld almost $400 million that Congress designated to help Ukraine defend its borders and fend off Russian aggression. He arrvied at 10 a.m. and is testifying behind closed doors. 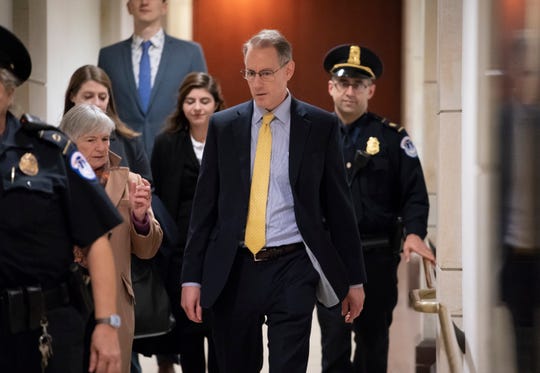 Mark Sandy, a career employee in the White House Office of Management and Budget, arrives at the Capitol to testify in the House Democrats' impeachment inquiry in Washington, Saturday, Nov. 16, 2019. (Photo: J. Scott Applewhite, AP)

Previous witnesses have described how Trump’s allies said that aid wouldn’t be released until Ukraine’s president announced an investigation of former Vice President Joe Biden and his son Hunter Biden.

“I expect before all the evidence is in that we will find out that there was political influence used to hold that money back and it comes from the White House,” said Representative Jamie Raskin, a Maryland Democrat.

Republicans have complained that these witnesses, including two who appeared in public hearings this week, didn’t have firsthand knowledge about Trump’s motivation for delaying this assistance for Ukraine. Sandy’s testimony potentially offers direct knowledge about the holdup on the aid, which was eventually released under bipartisan scrutiny from Congress.

Other OMB officials, including Acting Director Russell Vought, said they planned to follow the White House directive to not comply with with the impeachment inquiry.

Rep. Mark Meadows, a North Carolina Republican, said he expects Sandy will say he didn’t know why the aid was held.

“I’m not aware of anybody at OMB that knows any reason other than the president’s concern over Ukrainian corruption as the reason, but perhaps I’m wrong,” Meadows said. “Maybe I’ll hear something new.”

The House Committees on Intelligence, Oversight and Foreign Affairs have issued subpoenas for witnesses, including those still employed by the executive branch, to give them legal cover to participate in the inquiry.

The Intelligence Committee called the three witnesses back to Capitol Hill to testify in public this week, following their previous depositions behind closed doors.

The two State Department officials who testified Wednesday, William Taylor and George Kent, detailed how they became aware of requests from Trump allies outside normal diplomatic channels that affected the aid for Ukraine.

Marie Yovanovitch, the former U.S. ambassador to Ukraine, testified on Friday how U.S. foreign policy was compromised by people like Rudy Giuliani, the president’s personal lawyer, leading their own shadow diplomacy. She described how Giuliani and his associates spread rumors about her that led to her being recalled from Ukraine in May.

Also on Friday, David Holmes, the political counselor in the U.S. Embassy in Kyiv, described a telephone call he overheard between Trump and one of his top diplomats. Speaking to the committees behind closed doors, Holmes said he heard Trump ask Gordon Sondland, the U.S. ambassador to the European Union, about “the investigations” – a reference to probes about Joe Biden and the 2016 election.

Sondland told Trump that the Ukrainian president “loves your ass” and would do “anything you ask him to,” according to Holmes’s opening statement, which was obtained by CNN.

Rep. Eric Swalwell, a California Democrat, said on Saturday panel members are evaluating whether to call Holmes to testify in public.