Pence set to join Trump in Michigan next week

Pence set to join Trump in Michigan next week

Vice President Mike Pence will join President Donald Trump in Michigan next week, Trump's campaign announced Wednesday — around the time the U.S. House of Representatives may vote on articles of impeachment.

Pence will speak at a Dec. 18 "Workers for Trump" event in Saginaw and will then participate in the Trump campaign's "Merry Christmas Rally" in Battle Creek. The campaign announced last week the president's holiday-themed 7 p.m. event at the Kellogg Arena. 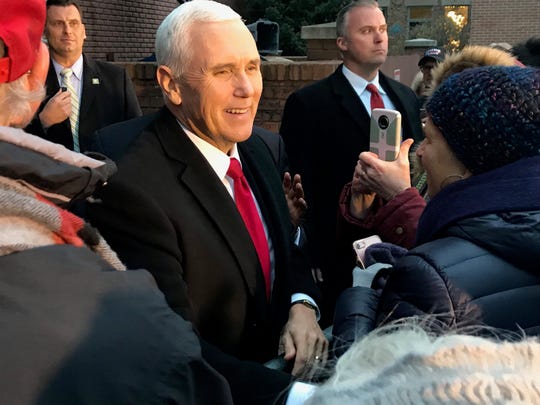 The Democratic leadership tentatively plans to hold floor impeachment votes next Tuesday or Wednesday, according to Politico.

The visit will be Trump's fourth stop in Michigan and Pence's 12th trip since taking office in 2017. Trump's most recent visit was a re-election rally in Grand Rapids in March.

Pence's Wednesday stops will come exactly two weeks after he headlined a rally in Holland and made a surprise visit to an American Legion post in Grand Rapids.

At the Holland rally, Pence promised that he and Trump would hold more events in  Michigan — a state Trump won by 10,704 votes or less than two-tenths of a percentage point over Democrat Hillary Clinton. It was Trump's narrowest margin of victory in the 2016 election.

Michigan Republican Party Chairwoman Laura Cox said Pence knows "knows just how important Michigan will be next year," according to a statement.

"We look forward to seeing the president and vice president speak directly to Michiganders next week about the administration’s agenda, and the countless policies, initiatives, and reforms that have made Michigan a more prosperous place since they took office," Cox added.

Democratic presidential candidates have also been making stops in Michigan. They participated in a debate in Detroit in July.