Senate Democrats urge state not to retaliate against diplomats

Senate Democrats urge state not to retaliate against diplomats

Senate Democrats are introducing a resolution calling on the State Department to honor promises not to retaliate against diplomats who testified in the impeachment inquiry, saying the group “upheld their oaths” to defend the Constitution by coming forward.

The resolution, submitted by all 10 Democrats on the Senate Foreign Relations Committee, recognizes by name each of the 10 current and former State Department diplomats, including former Ambassador to Ukraine Marie Yovanovitch – who was forced out of her posting in Kyiv – and her temporary replacement William Taylor, who testified about what they knew to the impeachment inquiry led by House Democrats. 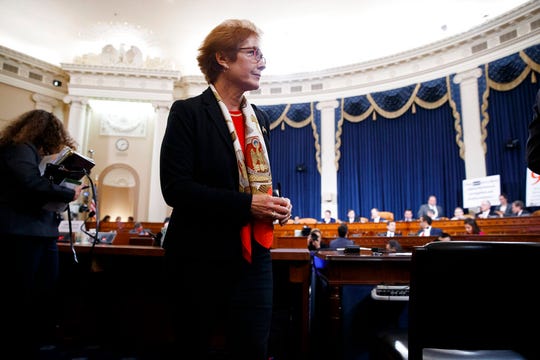 Former U.S. Ambassador to Ukraine Marie Yovanovitch gets up during a break in testimony before the House Intelligence Committee, Friday, Nov. 15, 2019, in the second public impeachment hearing of President Donald Trump's efforts to tie U.S. aid for Ukraine to investigations of his political opponents. (Photo: Jacquelyn Martin, AP)

The resolution honors employees of the State Department and the U.S. Agency for International Development and “calls on the people of the United States to reflect on the service and sacrifice” of those employees. It says they work daily to “promote American ideals and values, human rights, freedom, gender equality and democracy.”

The diplomats who were named defied demands from the White House that government officials not testify in the inquiry into whether President Donald Trump sought to extract political favors from Ukraine in exchange for $391 million in aid. While most have returned to their jobs, diplomats have expressed fear that they might face retaliation.

The resolution may be aimed in part at seeing how far Republicans who control the Senate are willing to back claims from Trump and his allies that many of those who testified are part of a “Deep State” out to stymie his policies.

“These individuals and their families put American values above themselves,” said New Jersey Senator Bob Menendez, the top Democrat on the Foreign Relations Committee.

The State Department has agreed to give diplomats some help with legal fees incurred for hiring lawyers for their congressional appearances. But Secretary of State Michael Pompeo has so far refused to comply with a subpoena to turn over documents as part of the inquiry, and one of his top aides, Ulrich Brechbuhl, ignored a subpoena to testify.

“We’ve asked every officers who moves forward, who testifies under oath, to do so fully, completely, accurately, truthfully, and that remains the expectation that I have for both the officers of the State Department,” Pompeo told reporters on Dec. 10.