Washington — The standoff over President Donald Trump’s impeachment trial deepened Wednesday as Senate Majority Leader Mitch McConnell said there will be “no haggling” with Democrats as House Speaker Nancy Pelosi demands for more details and witnesses. 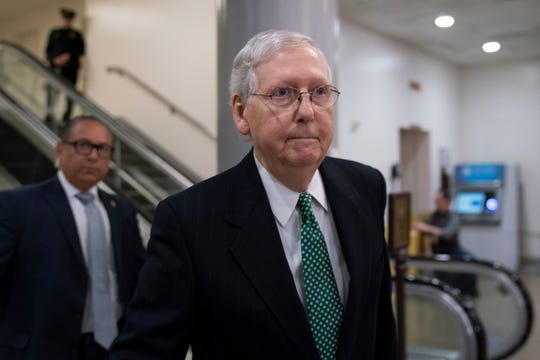 McConnell’s Senate majority has the leverage Republicans need to launch Trump’s trial toward swift acquittal of the charges, but Pelosi’s reluctance to transmit the articles of impeachment leaves the proceedings at a standstill.

What started as a seemingly minor delay over process and procedures is now a high-stakes showdown between two skilled leaders facing off over the rare impeachment trial, only the third in the nation’s history.

“There will be no haggling with the House over Senate procedure,” said McConnell, R-Ky., who met later Wednesday with Trump at the White House. “We will not cede our authority to try this impeachment. The House Democrats’ turn is over.”

Three weeks have passed since the House impeached Trump on the charge that he abused the power of his office by pressuring Ukraine’s new leader to investigate Democrats, using as leverage $400 million in military assistance for the U.S. ally as it counters Russia at its border. Trump insists he did nothing wrong, but his defiance of the House Democrats’ investigation led to an additional charge of obstruction of Congress.

Senators from both sides are eager to serve as jurors for Trump’s day in court. The trial will be conducted in the Senate, where Republicans have a thin majority.

But even as McConnell spoke from the Senate floor, Pelosi, D-Calif., was giving no indication of her willingness to agree to his terms. In a closed-door meeting with the House Democratic caucus, she spoke instead about the crisis in the Middle East, with Iran’s retaliatory ballistic missile attacks on U.S. bases in Iraq, according to several Democrats in the room.

The impeachment timeline is complicating the political calendar, with the weekslong trial now expected to bump into presidential primaries. Several Democratic senators are running for the party nomination.

Returning to Washington from the campaign trail, Sen. Elizabeth Warren, D-Mass., told reporters she was confident in Pelosi’s plan.

“I have no doubt that she will get this right,” Warren said. ”Some things are more important than politics, and the impeachment of a president is certainly one of those. No one is above the law, not even the president.”

Another 2020 hopeful, Sen. Cory Booker, D-N.J., said: “Those articles will come over here for a vote in due time.”

The showdown is expected to be resolved this week, lawmakers said.

Pelosi wants McConnell to “immediately” make public the details of his trial proposal, according to a letter to colleagues. She wants to know how much time will be devoted to the trial and other details about the “arena’’ before announcing her choice of House managers to try the case in the Senate, according to Democrats familiar with the situation and granted anonymity to discuss it.

“Sadly, Leader McConnell has made clear that his loyalty is to the President and not the Constitution,” Pelosi wrote to colleagues late Tuesday. She said the process he is outlining is “unfair.”

The confrontation over a Senate trial had been building for weeks. But McConnell gained ground when he announced Tuesday that he has support from the majority of senators to start a trial structured like the last one, against President Bill Clinton in 1999. Those proceedings also began without an agreement on witnesses.

“We have the votes,” McConnell told reporters.

It takes 51 votes for agreement on the trial proceedings, and with Republicans holding a 53-47 Senate majority McConnell has a slight advantage if he can hold GOP senators together. Democrats are trying to peel off support from a few Republicans to support their demands.

McConnell, who has resisted calling new witnesses, expects a speedy trial that will end with Trump acquitted of the charges. He complained about Pelosi’s “endless appetite for these cynical games’’ and said it will be up to senators to decide if they want more testimony.