Republican Sen. Peter Lucido said he apologized for telling a female reporter a group of high school boys could "have a lot of fun with you"

Lansing — State Sen. Peter Lucido told a female reporter that a group of high school boys could "have a lot of fun with you," a comment that spurred him Wednesday to issue an apology and prompted an investigation.

The remarks drew criticism from Lucido's colleagues and inspired the Republican and Democratic leaders of the Senate to ask the chamber's business office to investigate.

Allison Donahue, who works for the nonprofit publication Michigan Advance, said in a column that she tried to approach Lucido for an interview Tuesday inside the Capitol with a group of students from De La Salle Collegiate High School in Warren nearby.

Lucido, R-Shelby Township, asked if Donahue, 22, had heard of De La Salle, an "all boys' school," according to her reporting. 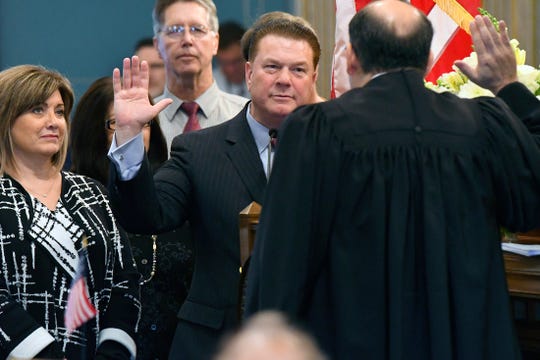 Approached for comment Wednesday morning, Lucido, who chairs the Senate Judiciary and Public Safety Committee, declined to answer questions about the situation or to confirm he made the statements.

"You're looking mighty dapper today," Lucido then said to a male reporter who asked him specifically if he had made the alleged comments on Tuesday.

The first-term senator, who has been floated as a potential GOP gubernatorial candidate in 2022, later issued a formal statement.

“I apologize for the misunderstanding yesterday and for offending Allison Donahue," said Lucido, a lawyer.

Their letter cited Senate rules, which say sexual harassment "will not be tolerated by the Senate." The Senate's policy manual allows the Senate majority leader, working with the business office, to decide whether disciplinary actions should be taken.

"Sexual harassment has no place in the Michigan Senate," the leaders' letter said. "We take these allegations very seriously and trust that you will take appropriate action to resolve this matter." 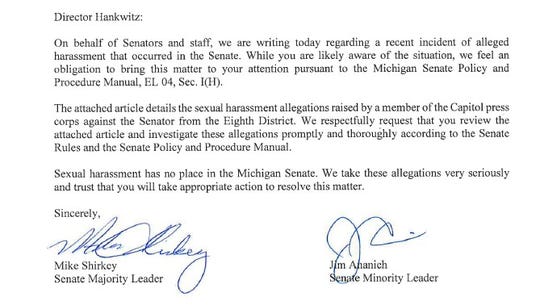 The leaders of the Michigan Senate are asking the Senate Business Office to investigate Sen. Peter Lucido's comments to a female reporter. (Photo: Document)

Shirkey, R-Clarklake, who leads the GOP caucus, said the reported comments from Lucido were unacceptable.

"I take this very seriously and intend to have a very intense and lengthy private conversation with the senator as soon as we are done with session this morning," Shirkey told reporters.

"They're inappropriate for any self-respecting man," Ananich said.

"Men don't talk like that," the Democratic senator continued.

I am unfortunately not surprised by this. I was 23 when I started working in politics in Lansing and the number of inappropriate comments or actions that I’ve personally experienced is hard to comprehend. This needs to stop. https://t.co/V2lN8ofX0b

“I was 23 when I started working in politics in Lansing and the number of inappropriate comments or actions that I’ve personally experienced is hard to comprehend,” Cook tweeted. “This needs to stop."

Sen. Winnie Brinks, D-Grand Rapids, highlighted Lucido's position as chairman of the Judiciary and Public Safety Committee. Lucido's comments were "disconcerting coming from the chair of the committee in which most bills regarding violence against women are heard," Brinks said.

De La Salle students were visiting the Capitol on Tuesday, and two of the school's vans were parked outside the Senate office building for much of the day.

"Senator Lucido’s comments do not represent De La Salle nor the values and conduct we instill in our young men," the school said on Twitter. "We are very sorry the reporter was put in this position and we have met with the boys who were on the tour to discuss the improper nature of this situation."

The Catholic school has been dealing with a hazing scandal in the past two months. The two-time defending state champion even canceled its football playoff game after news of the alleged hazing incident surfaced.