Lansing — The president of an influential business group says he might support Democratic Gov. Gretchen Whitmer's administration selling bonds to fund a flurry of infrastructure improvements.

Rich Studley, president of the Michigan Chamber of Commerce, said financing critical bridge projects across the state "might by a very good use of bond proceeds."

"If they are carefully crafted, if they are properly funded, they can be very appropriate," Studley added Tuesday about bond issues. "The key, I think, is to focus on major capital improvements, long-term investments that either maintain or appreciate in value." 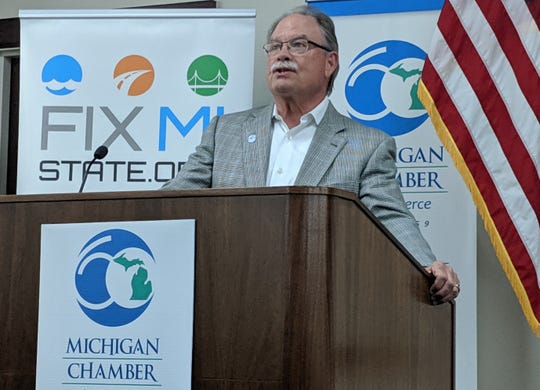 Rebuilding infrastructure, like replacing an unsafe bridge, would be a more appropriate use of bonds that can create long-term debt than short-term fixes, such as patching potholes, he explained.

Studley said he's met with Whitmer and bonding was one of the issues they discussed.

While Whitmer's administration hasn't confirmed it will seek bond sales to fund infrastructure improvements in 2020, the first-term governor proposed the idea of bonding when she was a candidate. And some Republican lawmakers are expecting her to pursue it after her 2019 plan to increase the gas tax by 45 cents a gallon met heavy resistance in the Legislature.

Whitmer has repeatedly said the state needs more than $2 billion in additional transportation funding each year to fix its crumbling infrastructure.

Under Michigan law, the state's transportation commission, which is comprised of gubernatorial appointees, can sell bonds while pledging future gas tax and registration fee revenue to pay the debt. Supporters of the idea of bonding for road improvements believe the move would create an influx of immediate dollars for projects "to fix the damn roads," as Whitmer's 2018 campaign slogan promised.

But opponents are worried about taking on additional debt, which diverts future money from road improvements to debt payments.

Former Govs. John Engler, a Republican, and Jennifer Granholm, a Democrat, issued bonds for infrastructure projects. And while the amount of debt outstanding has declined, the state is still paying off those bonds.

State Sen. Roger Victory, R-Hudsonville, formally introduced a bill on Tuesday that would give the Legislature the power to reject an administration's push to sell more than $100 million in bonds for road improvements in a year.

The bill, which The Detroit News reported Monday night, came Tuesday morning, the same day legislative leaders held a meeting with Whitmer to talk about priorities for 2020.

There was some discussion on roads during that gathering but the topic didn't dominate the conversation, according to House Speaker Lee Chatfield, R-Levering, and Senate Minority Leader Jim Ananich, D-Flint.

The closed-door meeting, which lasted about an hour, was "one of the more productive quadrant meetings we've had this term," Chatfield said afterward. The term "quadrant" meeting refers to the two Democratic and two Republican leaders of the Legislature.

On the subject of bonding for road improvements, Chatfield said he wants to ensure that all taxes levied on gas sales go to transportation needs before "we simply just take on more debt as a state."

"I think we need to be very cautious before we take on new debt," Chatfield said.

Chatfield has previously argued that the 6% sales tax paid on gas, which currently goes toward state school aid and revenue sharing with local units of government, should instead be preserved for roads so all revenue generated at the pump goes to pay for infrastructure repairs.

But Democratic lawmakers, like Ananich, want to find a way to replace the sales tax revenue that would be shifted to roads before making that change.

A 2015 analysis by the House Fiscal Agency analysis said exempting gas and diesel sales from the sales tax would reduce sales tax revenue by $653 million in 2016.

"I don't want to dis-invest in education," Ananich said. "If we have another downturn, which history says we will at some point, I don't want to see us have to make dramatic cuts."

Ananich said previously that bonding for road improvements could be a "responsible" way to improve the state's infrastructure if the Legislature and the governor can't reach a road funding deal to create new revenue.

He encouraged lawmakers to wait and see what ideas the governor is working on. Her 2020 State of the State address will take place on Jan. 29.

“I don’t know how we work to solve this problem if every time somebody comes up with an idea it gets shot down without a fair opportunity to be fully developed,” Studley said.