Washington – President Donald Trump’s legal team issued a fiery response ahead of opening arguments in his impeachment trial Saturday while House Democrats laid out their case in forceful fashion, saying the president had “abandoned his oath” and betrayed the public trust. 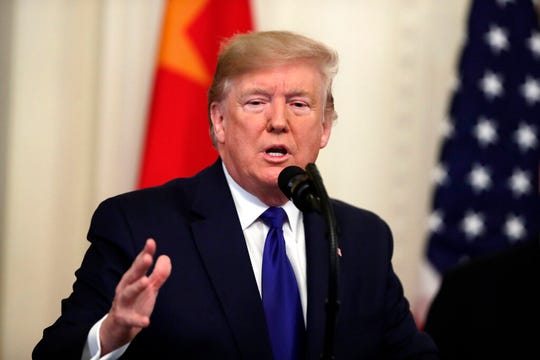 The dueling statements previewed arguments both sides intend to make once Trump’s impeachment trial begins in earnest on Tuesday. Both sides are seeking to make their case for a Republican-led Senate and for an American public bracing for a presidential election in 10 months.

The House’s 111-page brief pulls together the private and public testimony of a dozen witnesses – ambassadors and national security officials at high levels of government – who raised concerns about the president’s actions with Ukraine. Stripped of legalese and structured in plain English, the document underscored the extent to which the impeachment proceedings are a political rather than conventional legal process. The Trump team similarly offered a taste of the rhetoric expected to be deployed by the president’s defenders in the Senate.

In their brief, the House managers overseeing the prosecution wrote that it is clear that the “‘evidence overwhelmingly establishes” that Trump is guilty of both charges. “The only remaining question is whether the members of the Senate will accept and carry out the responsibility placed on them by the Framers of our Constitution and their constitutional Oaths,” the brief states.

The Trump team, meanwhile, called the Senate’s formal impeachment summons to two articles of impeachment passed by the House last month “a dangerous attack on the right of the American people to freely choose their president.”

“This is a brazen and unlawful attempt to overturn the results of the 2016 election and interfere with the 2020 election, now just months away,” the filing states.

Trump’s legal team, led by White House counsel Pat Cipollone and Trump personal lawyer Jay Sekulow, is challenging the impeachment on both procedural and constitutional grounds, claiming Trump has been mistreated by House Democrats and that he did nothing wrong.

Trump’s attorneys argue that the articles of impeachment are unconstitutional in and of themselves and invalid because they don’t allege a crime. Trump was impeached by the House on one count each of abuse of power and obstruction of Congress. Under the Constitution impeachment is a political, not a criminal process, and the president can be removed from office if found guilty of whatever lawmakers consider “high crimes and misdemeanors.”

Trump’s answer to the summons was the first salvo in what will be several rounds of arguments before the trial formally begin on Tuesday. Trump will file a more detailed legal brief on Monday, and the House will be able to respond to the Trump filing on Tuesday.

Trump on Friday named Ken Starr, the prosecutor whose investigation two decades ago led to the impeachment of President Bill Clinton, along with former Harvard Law professor Alan Dershowitz, to his defense team.

The additions bring experience in the politics of impeachment as well as constitutional law to Trump’s made-for-TV legal team. Both Starr and Dershowitz have been fixtures on Fox News Channel, Trump’s preferred television network.

Dershowitz said he will deliver constitutional arguments defending Trump from allegations that he abused his power. Trump is also accused of obstructing Congress as it sought to investigate pressure he applied on Ukraine’s president to announce an investigation into Trump’s political rivals as the president withheld the security aid and a White House meeting as leverage.

Trump says he did nothing wrong and argues that Democrats have been out to get him since before he took office.

A legal brief from the White House laying out the contours of Trump’s defense was due by noon Monday, and White House attorneys and Trump’s outside legal team have been debating just how political the document should be.

Some in the administration have echoed warnings from Senate Majority Leader Mitch McConnell, R-Ky., that the pleadings must be sensitive to the Senate’s more staid traditions and leave some of the sharper rhetoric exhibited during the House proceedings to Twitter and cable news.

Dershowitz is a constitutional expert whose expansive views of presidential powers echo those of Trump. Starr is a veteran of Washington’s partisan battles after leading the investigation into Clinton’s affair with a White House intern. The House impeached Clinton, who then was acquitted at his Senate trial. Trump is expecting the same outcome from the Republican-led chamber.

Still, the lead roles for Trump’s defense will be played by Cipollone and Sekulow, who also represented Trump during special counsel Robert Mueller’s Russia investigation.

Dershowitz sought to play down his role in the case in the hours after he was named to the team, saying he would be present for just about an hour to make the constitutional arguments.

“I’m not a full-fledged member of the defense team,” he told “The Dan Abrams Show” on SiriusXM.

White House lawyers succeeded in keeping Trump from adding House Republican lawmakers to the defense team, but they also advised him against tapping Dershowitz, according to two people who spoke on condition of anonymity to discuss internal discussions. They’re concerned about the professor’s association with Jeffrey Epstein, the financier who killed himself in a New York City jail cell last summer while awaiting trial on sex trafficking charges.

A Fox News host said on the air that Starr would be parting ways with the network as a result of his role on the legal team.

Other members of Trump’s legal defense include Pam Bondi, the former Florida attorney general; Jane Raskin, who was part of the president’s legal team during Mueller’s investigation; Robert Ray, who was part of the Whitewater investigation of the Clintons; and Eric D. Herschmann of the Kasowitz Benson Torres legal firm, which has represented Trump in numerous cases over the last 15 years.

Giuliani, a former New York-based federal prosecutor as well as the city’s former mayor, told The Associated Press the president had assembled a “top-notch” defense team and he was not disappointed at being excluded from it.

Giuliani, who many in the White House blame for leading Trump down the path to impeachment by fueling Ukraine conspiracies, had previously expressed interest in being on the legal team. But he said Friday his focus would be on being a potential witness.

Trump was impeached by the House in December. Senators were sworn in as jurors Thursday by Chief Justice John Roberts, who will preside over the trial.

Starr, besides his 1990s role as independent counsel, was a U.S. solicitor general and federal circuit court judge.

More recently, he was removed as president of Baylor University and then resigned as chancellor of the school in the wake of a review critical of the university’s handling of sexual assault allegations against football players. Starr said his resignation was the result of the university’s board of regents seeking to place the school under new leadership following the scandal, not because he was accused of hiding or failing to act on information.

Dershowitz’s reputation has been damaged in recent years by his association with Epstein. One of Epstein’s alleged victims, Virginia Roberts Giuffre, has accused Dershowitz of participating in her abuse. Dershowitz has denied it and has been battling in court for years with Giuffre and her lawyers. He recently wrote a book, “Guilt by Accusation,” rejecting her allegations.

Giuffre and Dershowitz are also suing each other for defamation.