Mnuchin said the “biggest risk to the U.S. economy” right now is a political one, contrasting President Donald Trump with two of the senators who are seeking to face off with him in November.

Treasury Secretary Steve Mnuchin speaking to members of the media outside the West Wing of the the White House in Washington, Wednesday, Jan. 15, 2020. (Photo: Pablo Martinez Monsivais, AP)

“So, you know, there are some very extreme, socialist economic programs,” he said. “You have some of the candidates – I won’t say which one – who want to regulate the top 100 U.S. corporations and set up a new agency in the government to do that.”

Warren has proposed creating an Office of U.S. Corporations that would require companies with revenue of more than $1 billion to obtain a federal charter that requires they look at the effects of their decisions on shareholders, customers, employees and communities where they operate. 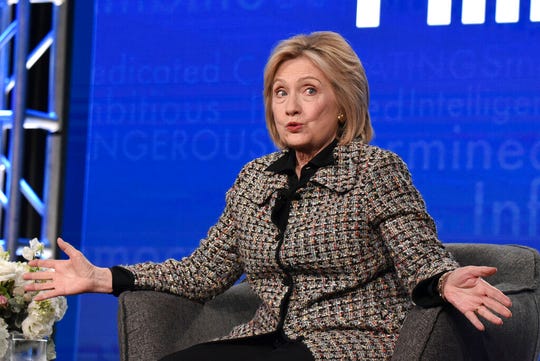 Clearly, the hatchet has not been buried between presidential candidate Bernie Sanders and Hillary Clinton.

In a new Hulu documentary quoted in The Hollywood Reporter, the 2016 Democratic presidential nominee calls her one-time rival “a career politician” with little support in the Senate. “Nobody likes him, nobody wants to work with him, he gets nothing done,” she says. “It’s all just baloney and I feel so bad that people got sucked into it.”

In the interview, Clinton also criticizes the attacks by “his online Bernie Bros” on Elizabeth Warren, Kamala Harris and other women running for office. She even declines to say whether she would endorse Sanders or campaign for him if he wins the nomination.

The criticism is harsh, but it still pales in comparison to the last time a party’s previous nominee went after a current contender. In 2016, Mitt Romney argued that Donald Trump was a reckless, dishonest, unstable, misogynistic con man and a phony.

For his part, Sanders brushed off the remarks. “My focus today is on a monumental moment in American history: the impeachment trial of Donald Trump,” he said in a campaign statement. “Together, we are going to go forward and defeat the most dangerous president in American history.” – Emma Kinery

The four senators running for the Democratic presidential nomination are leaning heavily on surrogates while they are stuck in Washington serving jury duty on President Donald Trump’s impeachment.

As the Senate trial gets under way in earnest this week, Elizabeth Warren is sending in Representative Ayanna Pressley, Bernie Sanders is putting forward Representative Alexandria Ocasio-Cortez, Amy Klobuchar is leaning on local officials and Michael Bennet has former Clinton adviser James Carville.

And everyone is sending their spouses.

Surrogates can only do so much, especially if they’re not as well-known as Sanders and Warren, who are often big draws on the trail.

But they may prove helpful in another way, as the race turns more negative in the waning days. Candidates have long used surrogates to criticize rivals while keeping their own hands clean, although Sanders apologized Tuesday when one of his supporters wrote in an op-ed that Joe Biden “has a big corruption problem.”

A new poll found Senator Bernie Sanders and former Vice President Joe Biden have the most support among Democratic voters in New Hampshire, though they were closely followed Senator Elizabeth Warren and former South Bend, Indiana Mayor Pete Buttigieg, who were both within the survey’s margin of error.

About 16% of likely voters said they support Sanders, with 15% saying they preferred Biden, according a Suffolk University/Boston Globe poll released Tuesday. Sanders and Biden were closely trailed by Buttigieg, with 12%, and Warren, with 10%. The results for Warren and Buttigieg were both within the poll’s 4.4 percentage-point margin of error.

Buttigieg, at 14% support, was most likely to be voters’ secon-choice candidate, closely followed by Warren, Sanders and Biden.

The results show a tight race that remains in flux in the weeks leading up to start of presidential balloting. The poll indicates the standing could change as more voters make up their mind or change their first choice after seeing how the candidates perform in the Feb. 3 Iowa caucus.

About 24% of likely Democratic primary voters said they were still undecided. Nearly half – about 47% – said their first choice could change before the Feb. 11 primary. The poll was conducted Jan. 15-19. – Laura Davison

– With assistance from Laura Davison, Emma Kinery and Saleha Mohsin.