A firm owned in part by Michael Hawks has been lobbying the Michigan licensing department led by Hawks' wife, Orlene, on marijuana, emails show

Lansing — When Gov. Gretchen Whitmer's administration launched the Marijuana Regulatory Agency, officials said the new bureau would be "autonomous" from the Michigan licensing department headed by a new director married to a major lobbyist.

Almost a year later, concerns continue to linger about the connection of Orlene Hawks, director of the Department of Licensing and Regulatory Affairs, and Michael Hawks, an owner of Governmental Consultant Services Inc., one of the state's largest lobbying firms.

An email obtained by The Detroit News through Michigan's open records law shows an employee of GCSI recently lobbied Hawks' deputy on marijuana policies, which were supposed to be primarily handled by the "autonomous" agency. 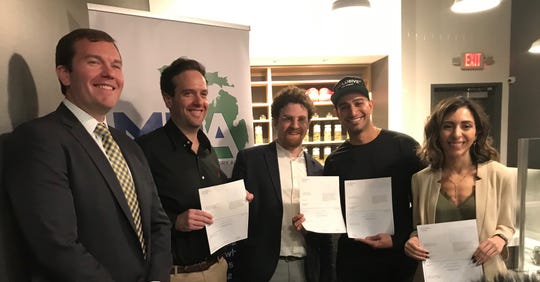 "Might you be open to, at minimum, a standing monthly call to discuss industry challenges and/or areas of opportunity?" Ken Cole, who was lobbying on behalf of the marijuana business Pharmaco, asked in a Nov. 13 message to Adam Sandoval, Hawks' deputy director.

"We’re happy to maintain the open line of communication with Pharmaco," Sandoval responded, adding "Andrew (Brisbo, the director of the Marijuana Regulatory Agency), has indicated that he’ll add me to existing standing calls between Pharmaco and the MRA."

"The meeting in question was simply a meet and greet," Harns said. "We have continued to abide by the conflict avoidance plan that was put in place last spring."

Hawks, whose appointment was announced in December 2018, signed a "non-participation" document on March 6. In the document, Hawks said she has no financial interest in GCSI. The document also says Hawks will refrain from participating in decisions relating to GCSI or "any business entity that employs GCSI as its lobbyist agent."

Over the first seven months of 2019, GCSI disclosed spending more money on lobbying than any other multi-client firm in Michigan, $913,343, according to the nonprofit Michigan Campaign Finance Network. GCSI's Michael Hawks didn't respond to a request for comment.

The reason the Marijuana Regulatory Agency was severed from the Department of Licensing and Regulatory Affairs "was to avoid the impression of impropriety," said Rick Thompson, board member for the Michigan affiliate of the National Organization for the Reform of Marijuana Laws.

The email exchange between a GCSI lobbyist and the department's deputy director cut against the idea, Thompson said. But he added that he's seen no evidence of wrongdoing among state regulators and that he respects Brisbo's "integrity."

The conflict between having a department director married to the head of a major lobbying firm "can't be denied," said Don Bailey, a member of the Medical Marijuana Licensing Board, which Whitmer discontinued in favor of the Marijuana Regulatory Agency.

Pharmaco operates one grow facility and eight provisioning centers, according to Cole's email to Sandoval, which referenced a Nov. 6 meeting. 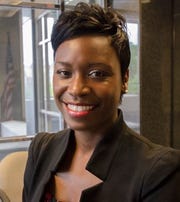 Sandoval responded to each of Cole's points six days later, saying that the department recognizes that "the illicit market is the biggest threat to the regulated market."

As for product transfers between provisioning centers selling medical marijuana, Sandoval highlighted a controversial Nov. 13 bulletin that allowed businesses in the medical marijuana market to transfer a portion of their product to the recreational market if they held equivalent licenses.

The Nov. 13 announcement surprised and frustrated some marijuana advocates, who argued it shifted needed medical marijuana away from patients. It also allowed some businesses to begin selling recreational marijuana in Michigan on Dec. 1.

The transfer decision is an example of why some in the marijuana industry are concerned about businesses' access to state officials. A business that knew that transfers would be allowed on Dec. 1 could have stockpiled product to prepare for the change.

It's not clear any business had that inside information early, and no documents obtained by The News indicated it happened.

A small number of decisions a company makes in the burgeoning marijuana industry can determine if the company sinks or swims, said Thompson, board member of Michigan's NORML affiliate.

"You have to be concerned that there is information transfer happening at some point," he said.

While there have been private allegations that GCSI clients have done well in licensing for the new recreational market, a review of lobbying disclosures and licensing information doesn't appear to show GCSI clients doing noticeably better than other firms' clients.

But GCSI does represent the first safety compliance facility to be licensed, PSI Labs in Ann Arbor, and multiple businesses that have been pre-qualified for licenses. 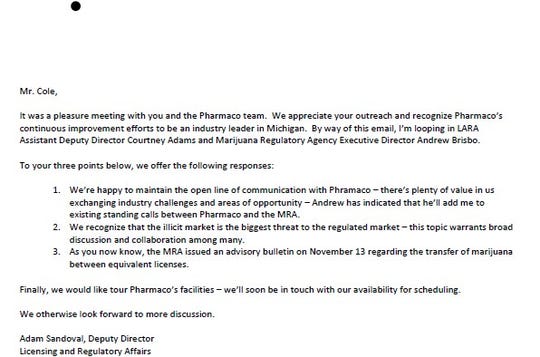 Adam Sandoval, deputy director of the Department of Licensing and Regulatory Affairs, responds to an email from Ken Cole, a lobbyist for Governmental Consultant Services Inc. One of GCSI's owners is married to the director of the department, Orlene Hawks. (Photo: Craig Mauger / The Detroit News)

GCSI's lobbying hasn't only focused on Sandoval, according to emails obtained through the Freedom of Information Act. On Oct. 9, Gary Owen, another GCSI lobbyist, sent a list of policy ideas on the home delivery of marijuana to Brisbo, the agency's director.

"Permit deliveries by licensed retailers only," Owen wrote of one of his suggestions.

Bailey, a retired State Police sergeant who has criticized the state's handling of marijuana issues, alleged that the former department director, Shelly Edgerton, appointed by former Gov. Rick Snyder, was too favorable to marijuana interests. Edgerton went on to lobby on behalf of marijuana clients for the Dykema firm after Snyder left office.

"Then, Gretchen Whitmer said, 'Hold my beer,'" Bailey said of the decision to make Hawks the department's director.

But the circumstances surrounding LARA don't suggest the potential conflicts involving GCSI were so fraught that the department couldn't do its job, said Kathleen Clark, professor at Washington University's School of Law in St. Louis.

Still, the public has a legitimate interest in knowing more about the director's financial connections to businesses that may come before her department, said Clark, who has studied legal and government ethics.

Michigan doesn't require public financial disclosures from administration officials or state lawmakers. It's one of only two states with no such requirement for legislators.