President Donald Trump will be back in Michigan on Thursday, his first stop in the battleground state during the 2020 election year

President Donald Trump will be back in Michigan on Thursday, his first stop in the battleground state during the 2020 election year.

Trump will deliver remarks at Dana Incorporated, an auto parts supplier in Warren on Thursday, the White House has announced. The event will take place a day after Trump is expected to sign the U.S.-Mexico-Canada Agreement, Trump’s replacement for the North American Free Trade Agreement, according to national media reports.

The president was last in Michigan on Dec. 18, when his campaign held a rally in Battle Creek. That event occurred the same day the U.S. House voted in favor of two articles of impeachment against him. 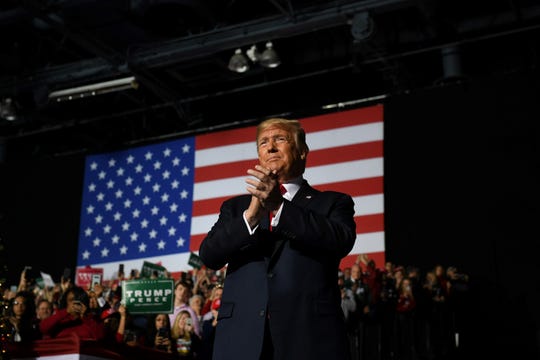 President Donald Trump acknowledges the crowd during a December 18 campaign rally at Kellogg Arena in Battle Creek on the same day he was impeached by the U.S. House of Representatives. (Photo: Robin Buckson, The Detroit News)

Trump held a rally just outside of Michigan in Toledo, Ohio, on Jan. 9.

Trump won Michigan by 10,704 votes in 2016 — his closest margin of victory in any state over Democrat Hillary Clinton. The state remains a battleground, and many Democratic presidential hopefuls have campaigned here after Democrats won all statewide offices in the 2018 election.

During a rally in Holland on Dec. 4, Vice President Mike Pence said he and the president would be back in Michigan “again and again and again” ahead of 2020.

The visit will take place less than a week before his State of the Union address on Feb. 4. Michigan Gov. Gretchen  Whitmer will deliver the Democratic response to the speech.