Gov. Gretchen Whitmer on Wednesday is expected to unveil a new road funding proposal after failing to reach a long-term plan last year with the GOP-led Legislature.

Members of the State Transportation Commission say they're expecting to consider a proposal to sell bonds to fund infrastructure projects on Thursday, a day after the governor's State of the State address.

The Democratic governor also will announce plans to enshrine parts of the Affordable Care Act into state law in case the 2010 federal law is repealed in part or in whole in the federal courts. The effort, which would need support from the GOP-led Legislature, would adopt several of Obamacare’s provisions into state law, including mandates banning insurance companies from discrimination or denial based on a client’s gender, sexual orientation, health or pre-existing conditions.

After a full year of divided government, Whitmer’s second State of the State address will “stay tethered to the fundamentals where I am hopeful we can find common ground,” Whitmer said Tuesday. The address also is expected to touch on literacy initiatives, eliminating the skills gap among workers, student aid and water quality.

“Where they won’t work with me, I’m going to move forward unilaterally where I can,” she said.

The governor wouldn’t confirm Tuesday if she is pursuing a bonding proposal — something she vowed to do during the 2018 campaign if a deal couldn't be reached with the Legislature. But she said she is prepared to use “unilateral powers” to move forward on her priorities, including road funding.

“It is thoughtful,” Whitmer said of the new roads plan. “I think it's fiscally responsible and it is a way to really start moving some dirt in a way that is going to improve the quality of people’s lives and the safety of our infrastructure.”

The latest road funding course the governor is expected to announce Wednesday was not her preference, she said, but further delays are a luxury the state can’t afford.

Whitmer campaigned on a promise to “fix the damn roads” but was unable to do so during her first year in office. GOP legislative leaders panned her proposal to increase the 26.3-cents-a-gallon gas tax by 45 cents, and the road funding debate eventually led to a breakdown in budget negotiations with Republican leaders.

“I put a plan on the table last year and it was a user fee that was dedicated to fixing the problem,” Whitmer said. That plan remains “the smartest way to go about real funding for our infrastructure needs. It was neither embraced nor countered with anything of substance.”

Under state law, the transportation commission, appointed by the governor, can issue bonds without the Legislature's approval, essentially allowing the state to take on debt to create an influx of funding for specific infrastructure projects.

If lawmakers aren't going to raise taxes substantially to improve the roads, the path of "least resistance" is bonding, said Stephen Adamini, a Democrat from Marquette whom Whitmer appointed to the commission in December.

"What else has she got?" Adamini said of bonding. "For me, it would make sense. That’s the next easiest way to go." 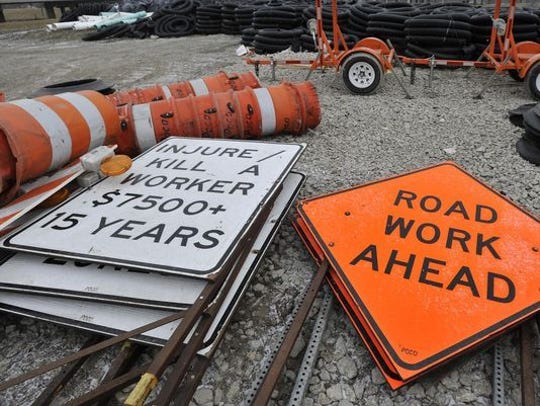 “Contractors are going back to work as we speak, using other non-union operators. So many projects will be up and running in very short order,” said Mike Nystrom, executive vice president for the Michigan Infrastructure and Transportation Association, Tuesday afternoon. (Photo: Detroit News, file)

But Adamini, a former member of the Michigan House, said he hadn't seen the specifics of what Whitmer would be proposing as of Tuesday afternoon. And it's unclear how much debt she would be willing to take on.

The State Transportation Commission is scheduled to meet 8 a.m. Thursday. Whitmer's State of the State address will take place at 7 p.m. Wednesday.

Of the six members on the transportation commission, three are listed as independents, two are listed as Republicans and one, Adamini, is listed as a Democrat. Former Gov. Rick Snyder, a Republican, originally appointed five of the commission members.

Todd Wyett, chairman of the State Transportation Commission, said commission members had received their information packets for their Thursday meeting and were awaiting further instruction from the administration.

Michael Hayes, a former state House member from Midland, is one of the two Republican members of the commission.

While some Republican lawmakers have opposed taking on debt to improve the roads, Hayes said bonding isn't a novel concept. He also said the commission isn't a partisan group.

"Various governors have used bonding for the roads because it’s allowed under the Constitution," Hayes said. "It’s always seemed to me a reasonable approach."

Former Govs. John Engler, a Republican, and Jennifer Granholm, a Democrat, used their administrative powers to authorize the sale of bonds to fund road improvements.

The state could issue new bonds against State Trunkline Fund revenues, mainly registration fees and gasoline taxes, and projects are expected to focus on state highways.

The state's debt service payment for bonds against revenue for state highways for 2020 will be about $118 million, the lowest debt service total in about a decade.

While there are limits on how much debt the state can take on for road improvements, the limits along with interest rates and the ability to stack bonds provide much wiggle room. The commission policy currently requires a ratio of restricted revenue to annual debt service of at least four to one.

A 2018 Michigan Department of Transportation document showed at that point, the state had a ratio of available revenue to debt service of about seven to one.

The state's outstanding debt against State Trunkline Fund revenue and anticipated federal aid peaked at about $2.3 billion in Fiscal Year 2009, according to the House Fiscal Agency. It was down to $1.2 billion by 2018. That alone is a debt drop of about $1.1 billion.

But many Republican lawmakers have said they would rather see the state continue to pay down its current debts to free up more money to go to roads instead of taking on new debt the state will have to pay back later.

Senate Appropriations Chairman Jim Stamas, R-Midland, said he would prefer a long-term and sustainable fix for the roads instead of bonding, which he described as short-term fix. 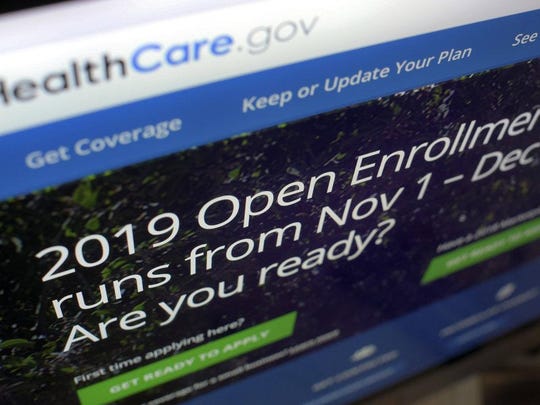 Whitmer also is expected to announce a plan to cement some of the provisions of the federal Affordable Care Act into state law as insurance against federal actions that may repeal parts of the health care plan.

The changes proposed by the governor will include requirements for “equitable coverage for mental health and substance use disorder” and prohibitions on lifetime dollar limits or annual caps, according to Whitmer's office.

"If the court challenge is successful and tanks the ACA, we’re going to have hundreds of thousands of people, if not millions, lose access to their health care, and we have an opportunity to keep that from happening,” Whitmer told The Detroit News.

In Michigan, the Affordable Care Act provided access to insurance through a Medicaid expansion called Healthy Michigan and through the health insurance marketplace.

Michigan’s uninsured residents decreased from 14.3% in 2010 to 6.1% in 2017 because of the health care reform, Whitmer’s office wrote in a document supporting the proposal.