On Monday, House impeachment managers and Trump’s defense team return to the Senate floor to make closing arguments in the trial

Washington – Closing arguments Monday in President Donald Trump’s impeachment trial were directed more toward history than to sway the outcome, one final chance to influence public opinion and set the record ahead of his expected acquittal in the Republican-led Senate.

The House Democratic prosecutors drew on the Founding Fathers and common sense to urge senators – and Americans – to see that Trump’s actions are not isolated but a pattern of behavior that, left unchecked, will allow him to “cheat”’ in the 2020 election. 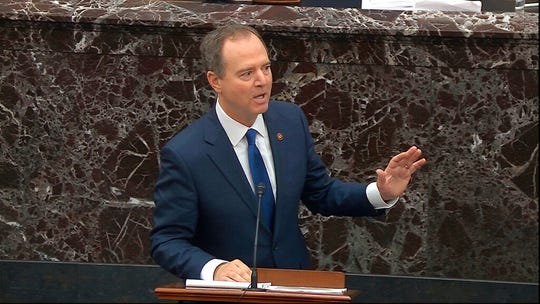 In this image from video, House impeachment manager Rep. Adam Schiff, D-Calif., speaks during debate ahead of a vote on calling witnesses during the impeachment trial against President Donald Trump in the Senate at the U.S. Capitol in Washington, Friday, Jan. 31, 2020. (Photo: AP)

Democrat Rep. Adam Schiff implored those few Republican senators who have acknowledged Trump’s wrongdoing in the Ukraine matter to prevent a “runaway presidency” and stand up to say “enough.”

The president’s defense countered the Democrats have been out to impeach Trump since the start of his presidency, nothing short of an effort to undo the 2016 election and to try to shape the next one, as early primary voting begins Monday in Iowa.

“Leave it to the voters to choose,” said White House counsel Pat Cipollone.

He called for an end to the partisan “era of impeachment.”

All that’s left, as the Senate prepares to acquit Trump on charges that he abused power and obstructed Congress, is for Americans to decide now and in the November election, as the third presidential impeachment trial in the nation’s history comes to a close.

Most senators acknowledge the House Democratic managers have essentially proven their case. Trump was impeached in December on two charges: that he abused his power like no other president in history when he pushed Ukraine to investigate rival Democrats, and he then obstructed Congress by instructing aides to defy House subpoenas.

But key Republicans have decided the president’s actions toward Ukraine do not rise to the level of impeachable offense that warrants the dramatic political upheaval of conviction and removal from office. His acquittal in Wednesday’s vote is all but assured.

GOP Sen. Lisa Murkowski of Alaska called the president’s actions “shameful and wrong,” but in a powerful speech late Monday she also derided the highly partisan process. “I cannot vote to convict,” she said.

Republican Sens. Lamar Alexander of Tennessee, Marco Rubio of Florida and Rob Portman of Ohio are among those who acknowledged the inappropriateness of Trump’s actions, but said they would not vote to hear more testimony or to convict.

“What message does that send? “ asked Rep. Hakeem Jeffries, D-N.Y., a House prosecutor. He warned senators that for Trump, the ”past is prologue.” He urged the Senate to realize its failure to convict will “allow the president’s misconduct to stand.” 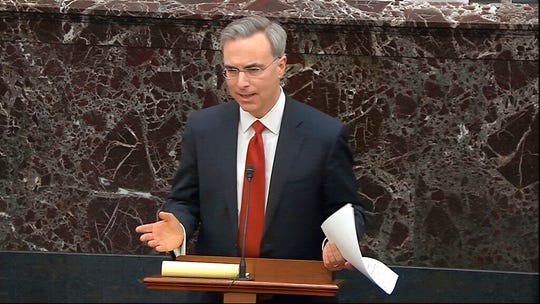 The Senate proceedings are set against a sweeping political backstop, as voters in Iowa on Monday are choosing presidential Democratic primary candidates and Trump is poised to deliver his State of the Union address Tuesday in his own victory lap before Congress.

It is unclear if any Republican or Democratic senators sworn to do “impartial justice’’ will break from party lines. One centrist Democrat, Sen. Joe Manchin, W-Va., said he was heavily weighing the vote ahead. He suggested censure may be a bipartisan alternative.

The House Democrats unveiled a striking case centered on Trump’s personal attorney, Rudy Giuliani, running an alternative foreign policy that drew alarm at the highest levels. As part of the “scheme,” Trump held up $391 million in U.S. aid from Ukraine, a fragile ally battling Russia, for his personal political gain, they argued. The money was eventually released after Congress intervened.

As Chief Justice John Roberts presided, the House managers opened with a plea from Rep. Jason Crow, D-Colo., a freshman and former Army Ranger: “We cannot and should not leave our common sense at the door.”

One by one, the Democrats drew on their life experiences to remind senators, and Americans, of the simple difference between right and wrong in the case against Trump.

Rep. Val Demings, a former police chief, argued that the president is not behaving like someone who is innocent. She warned that if senators do not convict, Trump will try to “cheat” again ahead of 2020.

“You will send a terrible message to the nation that one can get away with abuse of power, cheating and spreading of false narratives,” she told them.

Before Trump’s celebrity defense mounted its closing argument, the president himself already registered his views on Twitter, where he decried the whole thing – as he often does – as a “hoax.” 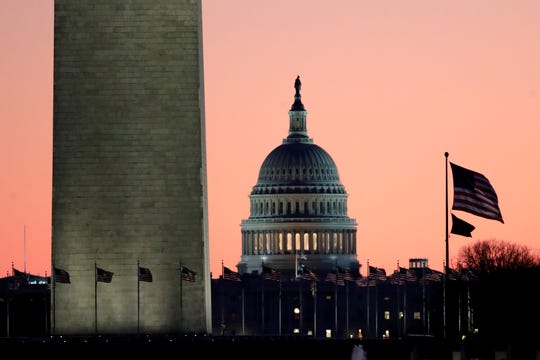 The U.S. Capitol building, center, is seen next to the bottom part of the Washington Monument, left, before sunrise on Capitol Hill in Washington, Thursday, Dec. 19, 2019, a day after the U.S. House voted to impeach President Donald Trump on two charges, abuse of power and obstructing Congress. (Photo: Julio Cortez, AP)

Kenneth Starr, the former prosecutor whose investigation led to Bill Clinton’s impeachment, complained about the inadequacy of the House prosecutors’ “fast track” case.

Trump attorney Jay Sekulow showed political clips of Democrats calling for impeachment – with many lawmakers of color, including Alexandria Ocasio-Cortez, a top Republican foil – to argue this was the “first totally partisan presidential impeachment in our nation’s history, and it should be our last.”

One key Trump lawyer, Alan Dershowitz, who was forced to walk back a sweeping defense of presidential power in last week’s arguments, did not appear.

Trump wanted acquittal secured before he arrives at the Capitol for the State of the Union address Tuesday, but that will not happen.

Senators carrying the power of their votes to the history books wanted additional time to make their own arguments, in public speeches from the floor of the Senate. Those began Monday afternoon and were expected to continue until Wednesday’s vote.

The trial unfolded over nearly two weeks and reached a decisive moment last Friday when senators voted against calling witnesses and documents. Key Republicans said they had heard enough. It becomes the first impeachment trial in the nation’s more than 200-year history without any witnesses.

Even new revelations from John Bolton, the former White House national security adviser, whose forthcoming book discloses his firsthand account of Trump ordering the investigations, did not impress upon senators the need for more testimony.

Bolton said he would appear if he received a subpoena, but GOP senators said the House should have issued the summons and the Senate did not want to prolong the proceedings.

Prosecutors relied on a 28,000-page report compiled over three months of proceedings in the Democratic-controlled House, including public and private testimony from 17 witnesses, among them current and former ambassadors and national security officials with close proximity to the Ukraine dealings.

The case stems from Trump’s July 25 call with Ukraine that he maintains was “perfect.” A government whistleblower alarmed by the call filed a complaint that sparked the inquiry.