Whitmer was selected to give the Democratic response in late January; a Spanish-language response will also be offered by U.S. Rep. Veronica Escobar of Texas

When Gov. Gretchen Whitmer gives the Democratic response to President Donald Trump's State of the Union on Tuesday, it will be from East Lansing High School, the school her daughters attend, the governor's office announced Monday.

“I’m honored to discuss the Democratic Party’s vision of action for our nation from East Lansing High School, where my daughters are learning and preparing for the future,” Whitmer said in a statement announcing the site of the speech.

Whitmer was selected to give the Democratic response in late January; a Spanish-language response will also be offered by U.S. Rep. Veronica Escobar of Texas. 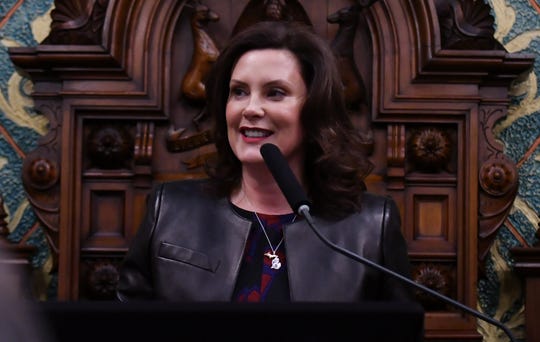 The response is usually given by an elected official whom opposition party officials tag as a rising star.

Whitmer said previously that the chance to offer the Democratic response would serve as an “exciting opportunity” to show Democrats “getting things done.”

Whitmer has “rolled up her sleeves” during her time in public service, House Speaker Nancy Pelosi wrote in a statement with Senate Democratic Leader Chuck Schumer announcing Whitmer’s selection.

“Her decades of hard work on behalf of the people should serve as a model for our nation,” Pelosi said. “She’s a forward-looking leader who is laser-focused on solving problems for everyday Michiganders and is uniquely qualified to deliver Democrats’ message of progress for all Americans.”

Whitmer’s efforts in Michigan are a “model for public servants everywhere,” Schumer said.

"Whether it's pledging to 'Fix the Damn Roads' or investing in climate solutions, Governor Whitmer's vision for the future is exactly what this country needs, and I'm thrilled she is giving the Democratic response,” he said.

Democratic former U.S. Sen. Carl Levin of Detroit appears to be the last Michigan politician to have given a State of the Union response, according to U.S. Senate records. In 1984, Levin was one of several members of Congress on a panel who responded to then-President Ronald Reagan's address in a partly taped and partly live program.

Then-House Minority Leader Gerald Ford of Grand Rapids, a Michigan native, gave the first televised response to a State of the Union address in a 30-minute rebuttal alongside Senate Minority Leader Everett Dirksen to President Lyndon Johnson's 1966 and 1967 addresses, according to U.S. Senate records.

"Today, thanks to the efforts of Dirksen and Ford, the opposition response is anticipated and discussed almost as much as the president’s speech," according to the Senate Historical Office.

The last sitting governor to give an official response to a State of the Union speech was then-South Carolina Gov. Nikki Haley, a Republican who responded to then-President Barack Obama’s speech in 2016. Haley was Trump's United Nations ambassador until deciding to step down at the end of 2018.