Hanover, N.H. — New Hampshire voters are poised Tuesday to re-order the field of Democratic presidential candidates. But as important, they will also send a message about what kind of change they want their party to stand for to challenge President Donald Trump.

Will it be the call for revolutionary change offered by Sen. Bernie Sanders of Vermont, a democratic socialist who wants to dramatically re-engineer the U.S. economy, or the one for generational change by Pete Buttigieg, who says his plans are rooted in realism? 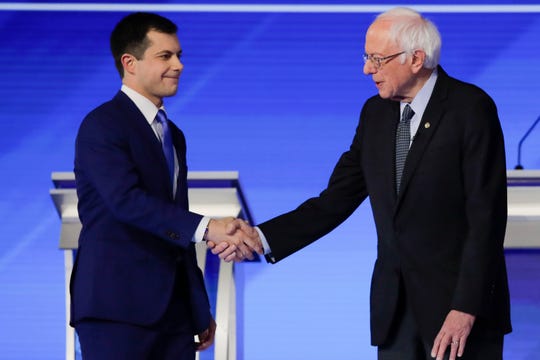 The candidates are separated by 40 years — longer than Buttigieg, 38, has been alive — and their appeals are starkly different as well. So far, Sanders, the candidate who is too old to be even be a baby boomer, has created far more energy among younger partisans, while Buttigieg is reminding voters that when the party chose generational change, it delivered candidates like John F. Kennedy, Bill Clinton and Barack Obama.

Tuesday’s primary will in part be a referendum on which call is more powerful as the nominating process accelerates. It is a question shaped by ideology and perceptions of electability as much as age. And on the eve of the second contest in the Democrats’ presidential primary season, the political world is looking to New Hampshire for answers in a primary election that hinges, above all, on change.

It’s an easy choice for Rebecca Nicol, a 19-year-old Dartmouth College sophomore. She packed into an off-campus conference hall over the weekend where hundreds of young people cheered the 78-year-old Sanders who personifies the kind of change they’re craving in 2020, even in a field that features much younger and more diverse options.

Sanders has won the hearts of young voters like no one else in 2020. Yet New Hampshire voters of all ages will weigh in on Tuesday as Democrats begin to decide just how aggressively they want their presidential nominee to lead their party in the Trump era.

It’s hardly the last word. The last candidate to win the Democratic primary in the state and go on to win the nomination was John Kerry in 2004.

Former Vice President Joe Biden’s promise to return to, and build on, the Obama years is not resonating so far. Neither are Massachusetts Sen. Elizabeth Warren’s layered prescriptions to combat corruption. The election has evolved into a two-person race of sorts pitting Sanders’ burn-down-the-house politics against the pragmatism of Buttigieg, a fresh-faced outsider who represents dramatic change on stage but is offering a much more cautious governing style.

Sen. Amy Klobuchar of Minnesota, who had a strong debate performance Friday and has drawn enthusiastic crowds since, threatens to take votes from Biden and others, with hopes of a surprising finish that will sustain her candidacy.

“We gotta make sure we’re making promises we can keep,” Buttigieg charged at a weekend rally at Keene State College, wearing a crisp white shirt, blue tie and no jacket as a decidedly older crowd cheered.

“I do not believe we can take the risk of falling back on the familiar,” he continued, standing at a podium emblazoned with the words, “Turn the page.” “And in a divided time in our country, I also don’t think we can take the risk of excluding anybody from this effort, of saying that if you’re not either for a revolution or status quo than you don’t fit. I think we are going to defeat this president by inviting everybody to be at our side.”

Buttigieg would be the youngest president elected in U.S. history, four years younger than Kennedy while Sanders would be the oldest. And they draw their support from dramatically different groups of voters.

In Iowa’s opening contest last week, Sanders won the support of 56% of voters under the age of 30, according to AP VoteCast. Overall, seven in 10 Sanders’ voters were under 45.

Buttigieg’s support was not as young as Sanders’ but not as old as some of his rivals’ either. About two-thirds of Buttigieg backers were 45 and older, compared with about a third who were under 45.

The age disparity was easy to see at rallies over the weekend on college campuses. Sanders’ events were packed with young faces. While Buttigieg drew a few hundred people to Keene State College on Saturday, very few of them college students,

“Our campaign is a very different campaign,” Sanders, in a baggy suit with his white hair unkempt, declared in an impromptu speech as he was mobbed in the hallway at Dartmouth. “Our goal, to be frank with you, is to transform our government and our economy so that finally Washington will represent the needs of all people and not just the 1%”

Almost yelling at his audience, Sanders added: “It is time to change the priorities of America.”

“It’s about the newness of the ideas, not necessarily the age of the messenger,” Weaver said as he turned to Buttigieg. “He’s personally new, but the ideas he’s spouting are the same old ideas that have got us where we are today.”

Buttigieg’s team notes that he’s devoted significant resources to courting younger voters, who made up a critical segment of the coalition that fueled both of Obama’s victories. He has hired campus specific organizers in three of the first four primary states in addition to training volunteer “campus coordinators” on more than 200 college campuses around the country. The campaign also hosts “Chat with Chasten” events on college campuses where Buttigieg’s husband talks with students about his experience in education.

Meanwhile, Biden’s team insists that his call for moderate change resonates with younger voters as well, particularly among older African-American millennials and Generation X voters. It’s those people in particular who well remember Biden’s high-profile role in the Obama administration and yearn for a return to those days, says Biden senior adviser Symone Sanders.

“Do we lose the youngest people? Yes. But we are the second choice of almost all young people,” she said, explaining that Biden’s message is focused on building on the successes of the Obama years.

And she stipulated to another reality. “Anything post Trump is frankly a dramatic change,” she said.

Yet establishment-minded Democrats who believed Biden’s embrace of centrism would make him a more electable candidate are starting to doubt themselves.

“I’ve got three grown children and all of them are leaning toward Bernie. He reaches out across generations. People are very excited about his candidacy,” Shurtleff said. “They say sometimes in Democratic primaries people tend to run more to the left and come back to the center. I don’t know, maybe the senator will do that, too.”